Comments after the race at Spa 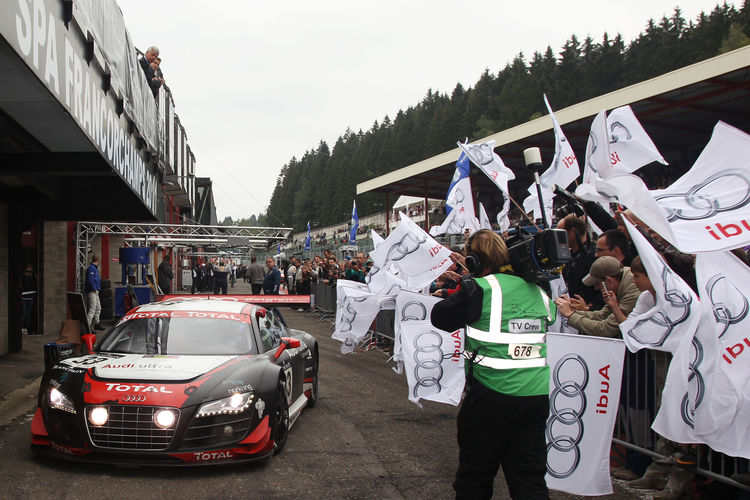 Audi has won the 24-hour race at Spa-Francorchamps (Belgium). The comments after the Audi R8 LMS sports car’s most important victory to date.

Dr. Wolfgang Ullrich (Head of Audi Motorsport): “We knew that it would be a very difficult race. I estimated that there are a good 15 cars capable of winning. This also proved to be the case in the first few hours of the race. However, our excellent performance from the very beginning allowed us to overcome the competition. For a large part of the race there was always an Audi in the lead. At the end it was the R8 LMS with Mattias Ekström, Greg Franchi and Timo Scheider which took the honors. The other WRT car only narrowly missed the podium. The Phoenix cars were very fast but unfortunately had some problems. Because of this they kept dropping back.”

Mattias Ekström (Audi ultra R8 LMS #33)
“Wow, what a race! To start I thought that I was in the DTM because everybody was driving so wildly. Then there were several incidents involving the competition and sister cars, but we kept out of trouble and just concentrated on fast, clean a faultless driving. Everything was perfect from the technical point of view, just like the entire team’s commitment – and so in the end everything went very smoothly. I’m very happy as I’ve tried quite often to win a 24-hour race. Before today I’ve always been left completely drained and empty handed, but today I have a huge trophy in the luggage compartment. This makes it all a lot more fun.”

Greg Franchi (Audi ultra R8 LMS #33)
“It was a very tough weekend and a very hard race. But we’ve taken the victory! It was a fantastic 24-hour race at Spa. There were a lot of mistakes and incidents on the track in the beginning. My thanks to the entire WRT team and Audi for the fantastic job.”

Timo Scheider (Audi ultra R8 LMS #33)
“An incredible feeling! Obviously the expectations before the race were very high. I always tried to subdue them a little because the competition was stronger than ever before and we also started with a very young team which hardly any of us knew beforehand. The guys did a fantastic job from the very first minute of practice and stayed cool in spite of the enormous pressure. Our Audi R8 LMS survived the 24 hours without a single scratch. A marvelous weekend for all of us.”

Filipe Albuquerque (Audi ultra R8 LMS #32)
“Fantastic! Our goal was to win. Unfortunately this wasn’t possible for our car. So, it was all about scoring as many points as possible for the Blancpain Series, which we achieved because the Autorlando Porsche retired. I now have my first 24-hour race behind me. There’s a load to do on such a weekend! It was great fun to drive the Audi R8 LMS. The team worked fantastically, especially when there were setbacks. This is why fourth position is such a great result. Congratulations to Audi, Mattias (Ekström), Timo (Scheider) and Greg (Franchi) for winning.”

Bert Longin (Audi ultra R8 LMS #32)
“I’d like to thank Audi and Audi Sport Team WRT. It was an honor for me to be able to race for this professional family. I’m not the youngest anymore, but I’ve never sensed such a love and passion for motorsport. This makes me incredibly happy. We took fourth place which involved fighting back from way down the field. Together with overall victory for our sister car this makes a fantastic weekend perfect.”

Stéphane Ortelli (Audi ultra R8 LMS #32)
“We should all be proud of the first Audi victory in the 24 hours Spa – a legendary race. It’s even more difficult for me to win here at Spa than at Le Mans. It’s a dream day for me today: we still managed to finish fourth and our sister car won.”

Marcel Fässler (Audi Top Service R8 LMS #98)
“I’d like to pass on my sincere congratulations to Audi Sport Team WRT and the team from car #33 for taking this important win. They did a faultless job. I’m also delighted for Audi and that the R8 LMS has won this prestigious 24-hour race.”

Andrea Piccini (Audi Top Service R8 LMS #98)
“We had four cars on the grid and our goal was that one of these cars should win. We did it. Unfortunately it wasn’t our R8 LMS. However, throughout the entire race we showed that we are fast. But we had a few problems. We gave our all – and Audi has won. This is the most important thing.”

Mike Rockenfeller (Audi Top Service R8 LMS #98)
“Congratulations to Audi and Audi Sport Team WRT. The Audi R8 LMS has won – this was the most important thing. The team did a fantastic job and deserved to win. We are obviously a little disappointed. We wanted to win with our car and Phoenix. I believe that we also did a good job and were well on the pace. But you also need a little luck during a 24-hour race. Because it’s not always the quickest car that wins such a race, but in fact the car that gets through without mistakes and technical problems.”

Marc Basseng (Audi Sport performance cars R8 LMS #99)
“A fantastic day for Audi! The first overall victory in a 24-hour race for the R8 LMS. A strong performance. The car was continuously developed and demonstrated today that it can also emerge after 24 hours of toughest racing as overall victor. I’m delighted for the WRT team and its driver. Unfortunately things didn’t go so well for us. Obviously it would have been fantastic to celebrate a 24-hour win after the personal 12-hour win at Bathurst. We had the pace. Phoenix had a sensational pit stop strategy and incredible speed when changing tires. We really had all the trumps cards. Unfortunately Christopher (Haase) lost the car under the most difficult conditions.”

Christopher Haase (Audi Sport performance cars R8 LMS #99)
“An extraordinarily exciting weekend for Audi. My congratulations go to Audi Sport Team WRT for first and fourth places, because they made an extremely difficult job look relatively easy and deserved to win. My Audi Sport Team Phoenix team also did a fantastic job. Unfortunately, we had some bad luck, but this is the way it is in motorsport. There are other races to make up for the lack of success. This is our and my goal.”

Frank Stippler (Audi Sport performance cars R8 LMS #99)
“A huge day. I’m absolutely delighted for Audi. And personally also for Werner Frowein the Managing Director of quattro GmbH. He has invested a great amount of initiative, commitment and energy in this project. It’s splendid that the first 24-hour victory is the result. I’m also happy for WRT because I know the team from last year. An excellent team with a very professional attitude, but also a family atmosphere. Unfortunately things didn’t go so well for us because a team mate had an accident. We had every chance of winning but retired from the lead. This is sadly part of the business.”

Ernst Moser (Team Boss Audi Sport Team Phoenix): “As we expected the Audi R8 LMS suits the demanding Spa- Francorchamps circuit very well. It has exactly the potential that such a track demands – which is why it was also the dominant car this weekend. As far as we were concerned we were unable to implement it in qualifying, however, the race pace right on the button and all four factory Audis were the fastest in the field. The problems we had left us with just one car, however, like at Le Mans it managed to reach the finish ahead of all the competition. Everybody else showed the potential of the cars. We want to build on this for the future and go for gold again next year.”

Vincent Vosse (Team Boss Audi Sport Team WRT): “For a young team like us this victory is incredible. The 24 hours Spa was a very important race for Audi. We worked very purposefully towards the goal. Everybody stuck together for a year. This victory is the just reward for the team and us as big family. Thank you to all at Audi Sport, quattro GmbH and the Belgian Audi Club.”