Comments after the Nürburgring 24 Hours 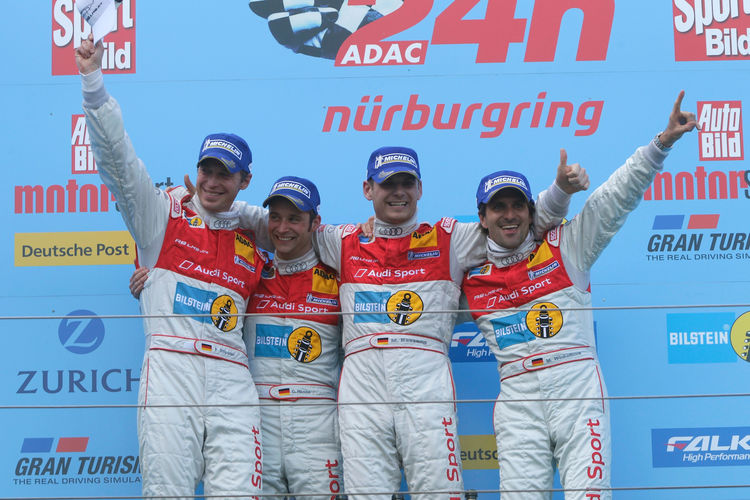 Audi takes its first overall victory in the Nürburgring 24 Hours. The comments of the key personnel and the Audi drivers after the race.

Dieter Gass (Head of Racing Commitments Audi Sport): “That was an absolutely fantastic race and a great result for Audi. We’ve waited a long time for this victory – today is the day. It was an exciting race from start to finish. On one occasion our leading car became the innocent victim of an accident but we fought back again to the front to take a one-two finish. Really an exciting result for Audi.”

Werner Frowein (quattro GmbH): “What shall I say? I’m just incredibly happy. My thanks go to our Board Member Michael Dick who made this fantastic project possible. And obviously also a big thank you to the teams and drivers who have all done a fantastic job. We’ve worked hard for years for this victory. It’s just a dream that now even overall victory follows the earlier class wins.”

Romolo Liebchen (Head of Audi Sport customer racing): “This is a historical event. Audi has never won the Nürburgring 24 Hours before. We’ve finally done it. This is the biggest victory for customer racing. We are very happy.”

Dirk Theimann (Team Manager Audi Sport Team Phoenix): “A great day for Audi and for Phoenix Racing. We have won this race with three different brands, but the win today is the most emotional for us. I dedicate this victory to Werner Frowein because he has always backed this program.”

Peter Mamerow (Team Boss Mamerow Racing): “It was overwhelming when I think that we only received the car eight or nine weeks ago and had a pretty short time to prepare. It has always been my dream to finish on the podium at the 24-hour race. We’ve made a few attempts, led twice and retired. At some stage or other you don’t believe it can happen anymore. The cooperation with Audi is excellent and there is a great feeling of belonging together – this is all just fantastic.”

Vincent Vosse (Team Director Speedhunters Team WRT): “The race at the Nürburgring is extremely difficult and we must respect it. We choose to take on the challenge, learnt a lot and performed well. The car was fast and our drivers were strong. Audi has a good car for endurance competitions. None of the cars had a real problem. This is a proper race car for 24-hour events although the GT3 cars were primarily developed for short races. This is extraordinary.”

Nicki Raeder (Team Director Raeder Motorsport): “It was a fantastic weekend. We had the honor of doing the event for Audi. Things ran perfectly before the accident. We followed a rather more conservative strategy at the beginning and wanted to increase performance later, which is why we gave the drivers three seconds more time to lap other cars per lap. However, after six hours we saw that you can’t win a race like this and then attacked. In the end this didn’t pay off, but you also don’t win anything here by driving slowly.”

Markus Winkelhock, Audi R8 LMS ultra #3 (Audi Sport Team Phoenix), 1st position: “It was a super weekend, the weather also played along. It was a massive show and a great atmosphere. The competition was very strong and the cars were at a high level. To be at the very top at the finish is obviously amazing because things didn’t run so sweetly to start. Qualifying wasn’t perfect and we weren’t so good in the opening hours. Today you saw just what can happen in 24 hours. The car was super, the drivers were well suited and the team did a great job. Thanks to everyone who was involved.”

Christian Mamerow, Audi R8 LMS ultra #26 (Mamerow Racing), 2nd position:
“I’m so incredibly proud of this entire team that has worked on this wonderful project. It’s simply fantastic to be speaking about a second place here, which I never thought possible beforehand. We produced solid work and got through without any real incidents. This was the key to our success.”

Christopher Mies, Audi R8 LMS ultra #2 (Audi Sport Team Phoenix), 5th position:
“It was essentially a good race. We led for many hours, but I had an accident in the early hours of the morning. There was another car as I was approaching the Pflanzgarten 2 section, it braked in front of me and I crashed into the guardrail. At the flag we were fifth, which isn’t what we had hoped for.”

Oliver Jarvis, Audi R8 LMS ultra #4 (Speedhunters Team WRT), 32nd position:
“It was certainly a very interesting race. Many incidents and events, but the most important thing is that our pace was really good. In the first few hours we could keep pace with the leading group. We were very competitive, but unfortunately we had contact with another car very early which is why we had to change the steering. Afterwards we fought our way back through the field again. Nevertheless, it was a race that was great fun. Our guys worked fantastically well and we learned a lot.”

Thomas Mutsch, Audi R8 LMS ultra #9 (Raeder Motorsport), retired:
“We had a very good weekend before the accident. The start was good; we got through the night in great shape and excelled with fast lap times. Raeder Motorsport gave us a good car that was also great to drive in the rain. In the morning at the Pflanzgarten I overtook a lapped slower car which changed its line just in front of me. I had to brake hard on the crest and lost the car. An unhappy end when you have come so far and were going well. I would like to say thank you to the Raeder Motorsport team for the fantastic car.”

Alexander Yoong, Audi R8 LMS ultra #24 (Audi race experience), retired:
“I really enjoyed my first 24-hour race with Audi. It was an incredible experience. I was exposed to all the possible weather conditions and I hope my team and Audi were satisfied with me. I also really hope that I can return next year. This is one of the greatest races I have ever seen.”