Comeback by Edoardo Mortara at Moscow 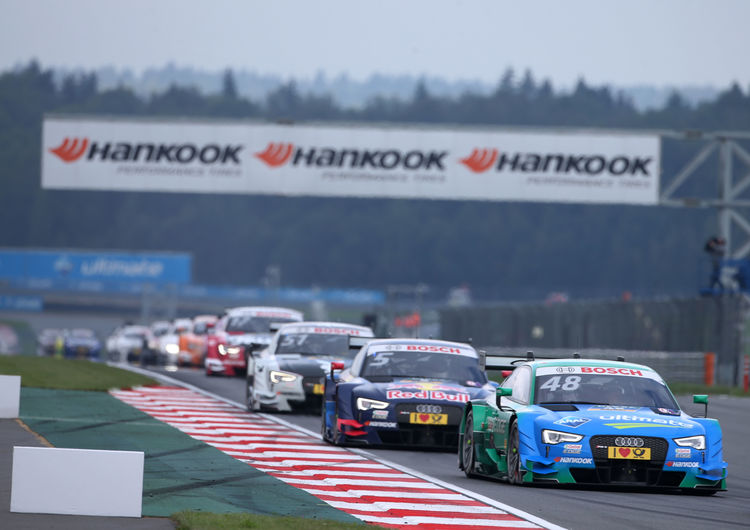 What a race for Edoardo Mortara: The Italian from Audi Sport Team Abt Sportsline in his Castrol EDGE Audi RS 5 DTM advanced from grid position 17 to sixth place in the second race at the Moscow Raceway (Russia) on Sunday. Following a disappointing qualifying session, Audi showed a strong race.

In the battle for the best grid positions in the morning, none of the eight Audi drivers managed the leap into the top ten. Youngster Nico Müller in the Playboy Audi RS 5 DTM in position twelve was the best Audi driver on the grid. The title hopefuls Edoardo Mortara and Jamie Green (Hoffmann Group Audi RS 5 DTM/Audi Sport Team Rosberg) even had to settle for grid positions 17 and 19. “We didn’t manage to get the tires to work precisely the way they should have in qualifying,” said Dieter Gass, Head of DTM at Audi Sport. “The right compromise between a fast lap in qualifying and the long race distance is difficult sometimes. We need to carefully analyze this.”

In the race, the Audi RS 5 DTM then were among the fastest cars, which Nico Müller’s fastest lap proved as well. With a total of four drivers in the points Audi still managed to score a respectable result in the light of the difficult starting base.

The man of the race was Edoardo Mortara. The Italian made up five positions right on lap one and subsequently continued to thrill the spectators with spectacular overtaking maneuvers. On the penultimate lap, he bumped Mercedes-Benz driver Daniel Juncadella from position six. In the last turn, Mortara still attacked Saturday’s winner Robert Wickens as well and saw the checkered flag in a photo finish alongside the Mercedes-Benz. On the finish line, Mortara was short merely 67 thousandths of a second from position five.

“It was a good race for me. I gave my best,” said Mortara following his comeback. “Initially, I was struggling quite a bit with the new set of tires. But then grip came and I was able to close the gap to the guys in front of me. I tried to put pressure on them and that worked out pretty well. Obviously, having had a number of Audi cars around me helped today too. That was good teamwork and a nice feeling.”

A comeback that went unrewarded was the one by Jamie Green who had started qualifying with a slight delay after having his power steering system changed. The Briton advanced similarly fast as Edoardo Mortara on the first few laps, but lost all chances of scoring points as a result of two drive-through penalties – the first one due to a collision and the second one for driving too fast in the pit lane.

“Following our truly catastrophic qualifying, we at least managed to bring four cars into the points,” Dieter Gass said, summing up the Sunday. “Some of our drivers were very fast for long stretches. Edo (Mortara) drove a superb race. He battled from the beginning to the end and made no mistakes. But obviously we can’t be happy with our overall results today.”