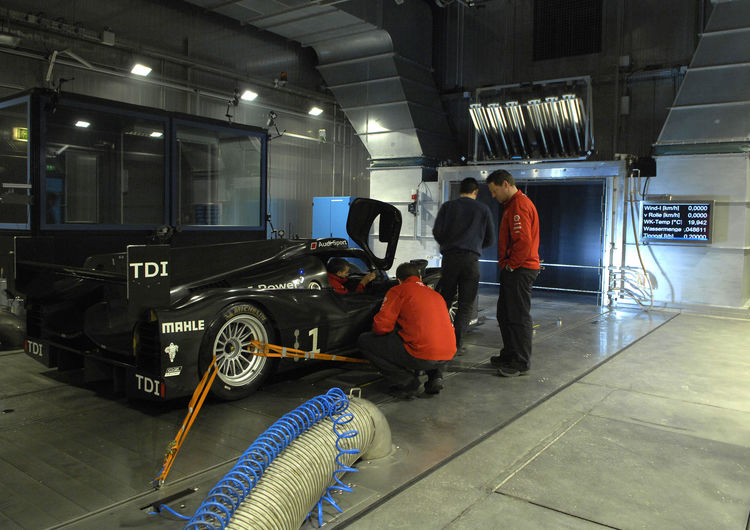 Premiere for Audi Sport: the Audi R18 TDI, with which Audi Sport Team Joest contests the 24 Hours of Le Mans on June 11/12, is the first Audi race car to be developed with the aid of the new climatic wind tunnel.

Since the beginning of 2008 the climatic wind tunnel completes the Audi Wind Tunnel Center in Ingolstadt. It creates temperatures between minus 25 and plus 55 degrees Celsius and allows engineers to generate freezing cold and blisteringly hot wind speeds of up to 300 kilometers per hour. The simulation of sunlight and rain are also possible.

Especially for the Audi R18 TDI, the opportunity to use the climatic wind tunnel operated by their production colleagues was extremely valuable for the Audi Sport technicians. The new LMP1 is Audi’s first closed Le Mans sports car since the R8C in 1999. “The climatic wind tunnel is an example of the extensive cooperation with Technical Development (TE),” explains Dr. Martin Mühlmeier, Head of Technology at Audi Sport. “The TE develops constantly and as part of TE Audi Sport is allowed to use these resources. Conversely, our colleagues from production development benefit from our findings from motorsport.”

In the climatic wind tunnel ventilation of the closed cockpit was optimized to such an extent that the R18 TDI will manage without air-conditioning at Le Mans. As this costs both weight and power the engineers were happy to exclude the use of such a system. The deposit of rain water or solid materials such as sand, rubber pick-up and stones was also simulated. “We made many valuable discoveries in this area on the full scale car in the climatic wind tunnel and modified several things and especially in the airflow area,” says Dr. Martin Mühlmeier. “The reflective film on the roof was also validated with findings from the climatic wind tunnel. These are all important details to guarantee a good climate around the driver in the cockpit.”

The new Le Mans sports car’s single-arm windscreen wiper was also developed in the Audi Wind Tunnel Center. “This subject is not as trivial as it would perhaps appear,” says Dr. Martin Mühlmeier. “We do indeed have experience from the DTM. However, the windscreen wiper is hardly ever used here. Also, a DTM car reaches 250 km/h and not 330. The demands on the windscreen wiper are considerably higher at Le Mans.”

Fogging and soiling of the complexly formed windscreen which, in contrast to a production car, is curved in not just one direction but two, is manufactured from plastic and was also tested in the climatic wind tunnel. The screen is heated to prevent fogging. For possible soiling a three-stage plan was developed which, subject to the level of soiling, allows for simple wiping, wiping with detergent or the removal of one of several layers of rip-off films.

Windscreen soiling is one of the concept specific disadvantages which a closed Le Mans sports car brings. However, as a result of work in the Audi climatic wind tunnel the disadvantages were minimized as much as possible.