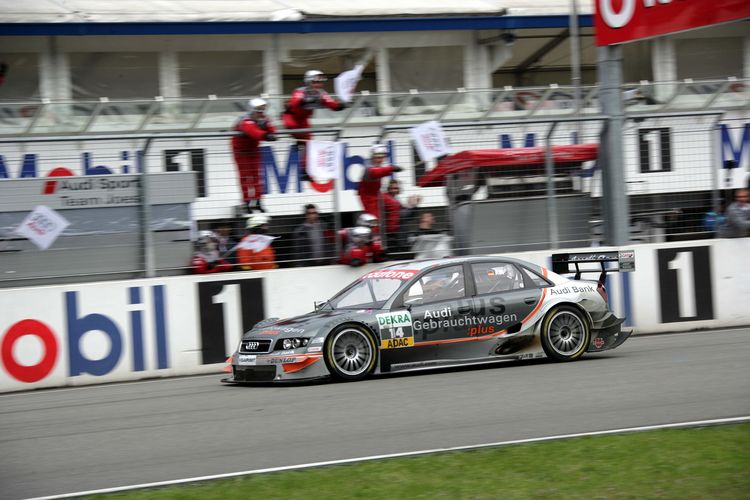 In front of an impressive backdrop of spectators (116,000 over the entire weekend), Christian Abt proved the quality of a “used” Audi in the DTM season opener at Hockenheim: in his first DTM race for Audi Sport Team Joest, Abt – after a starting collision, in which he was not at fault, that sent him into a spin – fought his way up from 16th to fourth place, just missing a podium position with the champion’s car from last year. Title defender Mattias Ekström, who had started the race from pole position with the new A4 DTM, was fighting a thrilling duel with Gary Paffett for several laps. The lead alternated between these two several times before Ekström – following his first pit stop – lost a lot of time behind slower cars to ultimately finish the race in fifth place.

Frank Stippler and Allan McNish finished their DTM debuts tenth and eleventh places respectively. Pierre Kaffer was in seventh place, and thus in the points, prior to being touched by a competitor just before the end of the race, which forced him to retire. Tom Kristensen and Rinaldo Capello got involved in a multiple-car collision at the first corner immediately after the start. Two turns later, Martin Tomczyk collided with a competitor and had to retire as well.

Christian Abt (Audi Sport Team Joest Racing #14)
4th place, + 8.955s
“I’m totally happy about the outcome of the race. Now, I know what the ‘plus’ in ‘Audi Gebrauchtwagen:plus’ means: Audi does not have four cars from last year but eight competitive racers! I want to thank Audi for giving me such a great car. And to the Joest team, I need to say ‘well done’, too. They did a fantastic job during testing already. If you’re able to move so far to the front from the back, the credit not only goes to the driver.”

Mattias Ekström (Audi Sport Team Abt Sportsline #1)
5th place, + 12.937s
“The positive thing is I scored four points. But starting from pole position, the result is a disappointment. The car was not as fast in the race as in qualifying. I had a lot of oversteer and lost a lot accelerating out of the corners. We had a good qualifying set-up, but not for the race distance.”

Frank Stippler (Audi Sport Team Joest Racing #19)
10th place, + 28.002s
“Unfortunately, I only finished tenth, but as far as my driving performance goes, I’m satisfied anyhow because I hardly made any mistakes. In the right-handers, the car understeered a lot. Also, I fell behind quite a bit on the first lap because I had to evade the crashes.”

Allan McNish (Audi Sport Team Abt #6)
11th place, + 36.232s
“It was an entertaining race. I managed to thread my way through the mayhem at the first corner and the car was really good both before and after my first pit stop. But the grip was not as good from the last set of tyres, which meant I wasn’t able to brake as late entering a corner. I was helpless to defend my top-ten place against my old rival Mika (Häkkinen), who edged past me with nine laps to go. But we’ve gained valuable data throughout the weekend and that can only help us in the coming races.”

Pierre Kaffer (Audi Sport Team Joest Racing #15)
13th place, - 9 laps (front left suspension damage after collision)
“Until my retirement I was very satisfied with my race. The DTM is really a fiercely fought competition, sometimes a bit too fierce. I now know this for next time. I want to thank my crew and Team Joest, as well, for the great tactics. All of us were in a position to score points today. Now, I’m really looking forward to EuroSpeedway.”

Martin Tomczyk (Audi Sport Team Abt Sportsline #2)
Retired, 4 laps, (front left suspension damage after collision)
“My start was very good, but while braking into the hairpin I touched a competitor. I’m very sorry about that, but he braked very early and turned in very early. I wasn’t able to get out of his way at all at that point and hit him on the side, which caused my suspension to break.”

Tom Kristensen (Audi Sport Team Abt #5)
Retired, 1 lap (starting accident)
“Obviously, it was a weekend when I can forget the results. But apart from that, Hockenheim was good. I learned a lot and was always fast, apart from Super Pole where it mattered. Because of that, I was in a place where I shouldn’t have been. Nobody is to blame for what happened in the first corner – it was just the normal chaos and I was in a sandwich.”

Rinaldo Capello (Audi Sport Team Joest Racing #18)
Retired, 1 lap (starting accident)
“I had a good start and was very careful in corner one because I expected some trouble. But despite this, I could not avoid hitting the car that was spinning across the track. That’s really a shame. My season will start at EuroSpeedway, because we discovered a leak in the steering after yesterday’s qualifying, which hindered me on Friday and Sunday. This morning, the car was really good and I felt very comfortable.”

Hans-Jürgen Abt (Team Director Audi Sport Team Abt Sportsline): “We had a lot of bad luck with the starting accident and all the confusion after the safety car phase. Still, we have to clearly say as well that we weren’t able to keep up the pace over the distance. We need to work on this.”

Ralf Jüttner (Technical Director Audi Sport Team Joest): “Today, we tried to promote ‘Audi Gebrauchtwagen:plus’ – this has worked out very well. Christian delivered a tremendous race, but Pierre and Frank, as well, did a super job of driving and could have scored points. We owe Frank an apology for the first pit stop where a wheel nut jammed. All other stops went off perfectly. We are incredibly happy, because our team performance was really a class act. I’d have never thought that this would work out so well. Christian now has more points already than he did all of last year. It would be nice if things continued going this way.”

Dr Wolfgang Ullrich (Head of Audi Motorsport): “Altogether, this just hasn’t been our day. On the first lap we lost three cars and then had some bad luck with our timing of the pit stops. After pitting, Mattias got stuck in traffic, which caused him to lose a lot of time. That decided the race, because – towards the end – everyone at the front of the field was clocking nearly identical lap times. Christian drove a really fantastic race, and I can only express my congratulations to him.”