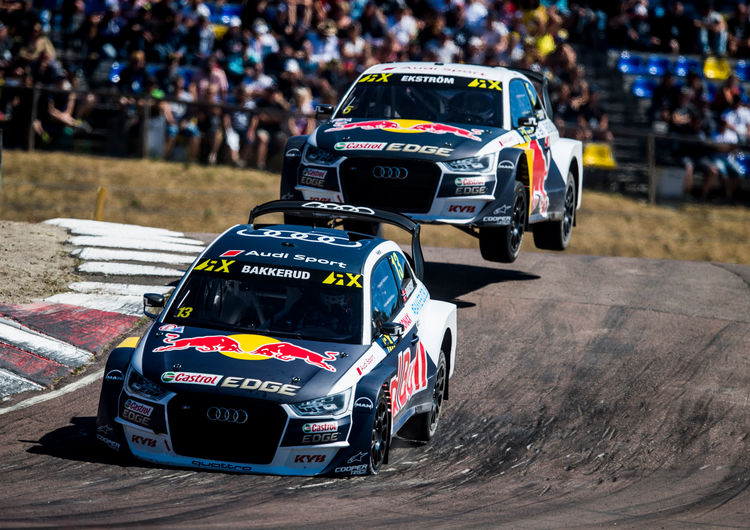 On clinching second place on the “Magic Weekend” in Höljes, Sweden, Audi driver Andreas Bakkerud improved from fourth to second position again in the FIA World Rallycross Championship (World RX). With a strong home round EKS Audi Sport bumped the Peugeot factory team from position two in the teams’ standings.

What a weekend in the Swedish woods! 51,600 spectators made for a record turnout and a festival atmosphere at the World RX season’s pinnacle event. Particularly active yet again were Andreas Bakkerud’s fans, who flocked to Höljes and fired up the crowd with their chants. The cheers were especially loud when their hero on the last lap of the final clinched second place in his 580-hp Audi S1 EKS RX quattro. For the Norwegian, this marked an amazing fifth consecutive Supercar podium at Höljes.

“It was a fantastic weekend with gripping races and a fantastic final in front of my large number of Bakkerud-Blue fans,” said the Audi driver. “Thank you to EKS Audi Sport that gave me such a good car. I’m proud of this result.”

Bakkerud was in position four after the qualification races. Following a victory in the semi-finals, he started from the front row in the final. Right from the start the Audi driver was following the subsequent winner, Johan Kristoffersson in a Volkswagen, in second place. This position was briefly in jeopardy on the final lap when Bakkerud did his “Joker Lap” and dropped behind the Peugeot of Timmy Hansen. However, Bakkerud immediately reclaimed the lost spot.

The duel between Bakkerud and Hansen indirectly meant trouble for Mattias Ekström who was immediately behind these two and overtook the Peugeot shortly before the finish as well. There was contact between the cars during this maneuver which meant the end of Hansen’s race. Consequently, Ekström was handed a penalty retroactively relegating him from third to sixth place.

“In the qualifying races, we were unlucky with our grid positions,” said Ekström. “This slowed us down somewhat throughout the weekend. We were also lacking speed. In the final, my car was the fastest, but from fifth on the grid it’s difficult to move forward. The last lap was a real challenge. Andreas was directly in front of me when Timmy apparently had a problem. I tried to overtake him as well. Our tires touched, but I managed to stay on track. Still, the weekend was okay. Andreas did a great job with second place and we’ll continue to fight.”

Höljes marked the end of the first half of the World RX season. After a brief break, it will continue on August 4/5 with the first overseas race at Trois-Rivières (Canada).