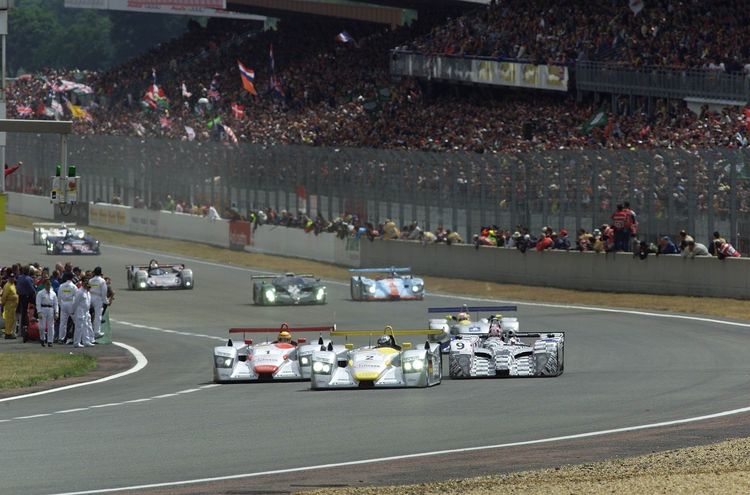 The Audi R8 won the Le Mans 24 Hours for the second time in the 2001 season. In addition to the sporting success, Audi caught the public’s attention with a technological innovation as well.

Heavy rain was the major acid test in the 69th running of the race, as a result of which the drivers were not able to run flat-out even on the straights. “Before my team-mates Emanuele Pirro, Frank Biela and I mounted the podium, Jacky Ickx told us that he’d never before experienced such a tough race at Le Mans,” Tom Kristensen recalls. The Belgian racing legend Ickx, with six victories under his belt, was the Le Mans record holder at the time.

On the wet tarmac, the Audi drivers benefited from a technology that Audi Sport had previously developed in a highly confidential project. When it was used for the first time in a race at Jarama, Spain, in spring of the same year, nobody had any inkling of this innovation – and during the event at Le Mans the technology was initially not discovered either. It only came to light after the 24-hour race. The V8 biturbo engine had a gasoline direct injection system. The technology called FSI – or TFSI in the case of turbo engines – caused a sensation. Response was improved, fuel consumption reduced and the engine could be started again faster – a measurable time advantage after each pit stop.

“The technology benefited us drivers more than we realized before the race,” says Frank Biela. “Back then, we had to make very precise use of the engine’s power output so that we wouldn’t slip off track. The FSI technology ideally assisted us in this effort. The responsiveness of the Audi R8 notably improved.” The system injects the fuel directly into the combustion chamber instead of into the intake manifold.

With this ‘Vorsprung durch Technik’ Audi impressed at Le Mans, just like the brand previously had with quattro four-wheel drive on rally racing tracks, in US racing, in the DTM and in super touring car racing. It marked the beginning of an innovation boost of the brand at Le Mans that has been continuing to this day.