Skip to content
We are using cookies for a better user experience.
06/22/19
Nürburg/Neuburg a. d. Donau
Sport

Best FIA WTCR weekend for Audi Sport at home round

Links
{{ activeItem() }}
Twitter
06/19/21
Qualifying begins at 12:00 local time (GMT-5). @ReneRastRacing will run in Group 2, @LucasdiGrassi in Group 3. Way… https://t.co/6KxTXioxF4
06/19/21
FP2 in Puebla: Dry conditions for the second free practice session. Qualifying is up next, beginning at 12:00 local… https://t.co/6gE7RwuNNa
06/19/21
FP1 in Puebla: @ReneRastRacing touched the wall slightly and had no drive afterwards, we changed the left-rear corn… https://t.co/t0u23qloil
06/19/21
Jump on board with @LucasdiGrassi in the Audi e-tron FE07 at the Autódromo Internacional Miguel E. Abed circuit. &gt;… https://t.co/GDAWqVW00d
Audi Sport on Twitter
{{ activeItem() }}
Facebook
06/19/21
RACE DAY in Mexico: The ABB Formula E Puebla E-Prix at 16:04 local time, GMT-5 (23:04 CEST). 🇲🇽 >> audi.com/FormulaE #FutureIsAnAttitude #PueblaEPrix
06/18/21
New venue: The ABB Formula E Puebla E-Prix is taking place at Autódromo Miguel E. Abed for the first time. Let’s hear from Lucas Di Grassi and René Rast as they share their thoughts on the circuit. >> audi.com/FormulaE #FutureIsAnAttitude #PueblaEPrix
06/16/21
We have three ABB Formula E victories in Mexico so far: 2017, 2018 and 2019. All three were at Autódromo Hnos. Rodríguez. This week, we will be racing at Autódromo Miguel E. Abed for the first time. >> audi.com/FormulaE #FutureIsAnAttitude #PueblaEPrix
06/14/21
Victory in New Zealand, GT racing podiums in Austria and Norway, as well as six trophies in touring car racing: Well done to our customers for the past race weekend! 🇳🇿 🇦🇹 🇳🇴 🇵🇱 🇫🇷 🇳🇱 🇬🇧 >> audi.com/GT3 >> audi.com/TCR #PerformanceIsAnAttitude
Audi Sport on Facebook 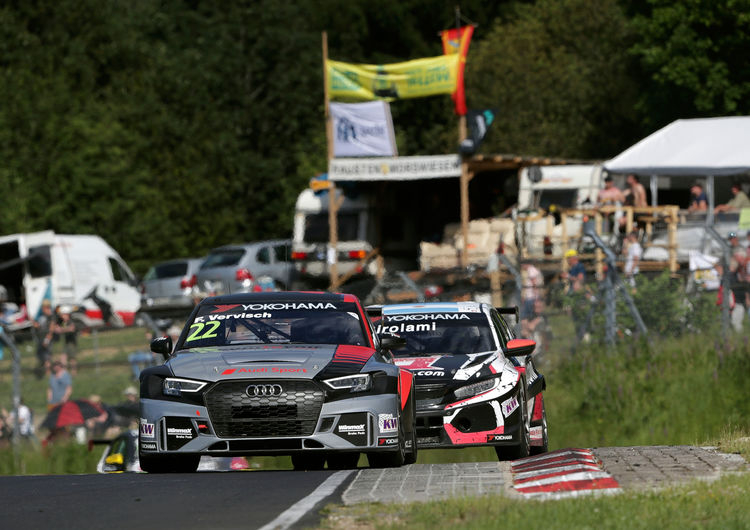 Audi Sport has every reason to be pleased: Halfway through the WTCR – FIA World Touring Car Cup season the brand celebrated its best result to date. In the supporting program of the 24-hour race at the Nürburgring, Audi Sport drivers Frédéric Vervisch, Niels Langeveld, Jean-Karl Vernay and Gordon Shedden combined scored 90 points – 16 points more than on Audi’s previously best weekend at the Slovakiaring.

“Everyone knows how challenging the Nordschleife is. Each of our four drivers showed his skills there, scored points and thus made our good team result possible,” said Chris Reinke, Head of Audi Sport customer racing. “In addition, our Finnish customer Antti Buri as a guest entrant contributed to our successful weekend by clinching second place on the grid in race two.” During the course of the event, the Audi Sport drivers managed to improve significantly from race to race. After Frédéric Vervisch claimed fifth position in the first sprint, his form curve clearly pointed upwards. In the second heat, he advanced to second place from fourth on the grid. In round three, the 32-year-old pro stormed forward right on the first kilometers from seventh to second place and maintained his position up until the finish. A year ago, he had stood on the podium at the Nürburgring for the first time and clinched two trophies as well. Now Vervisch with Comtoyou Team Audi Sport scored a total of 53 points. With that, the Belgian moved up from eleventh to fifth place in the standings.

Impressive as well was the fightback by Jean-Karl Vernay in the final race. The Frenchman from Leopard Racing Team Audi Sport raced forward from the 15th spot on the grid to position four. In the standings, he is now the second-best Audi Sport driver. His teammate, Gordon Shedden, handled the Nordschleife well too. From 16th on the grid the Scotsman improved in the final round to ninth position. Vervisch’s Dutch teammate, Niels Langeveld, in the third race even advanced from the 26th spot on the grid to twelfth position.

Now the next challenging task is coming up for the teams and drivers. The natural circuit in the Eifel will be clearly contrasted by a city street circuit in Portugal at the next event. In Vila Real, the WTCR – FIA World Touring Car Cup will enter into the second half of its season. Many fast sections on extremely narrow downtown streets pose a great challenge and leave no room for mistakes.