Beginning of a new era for Audi 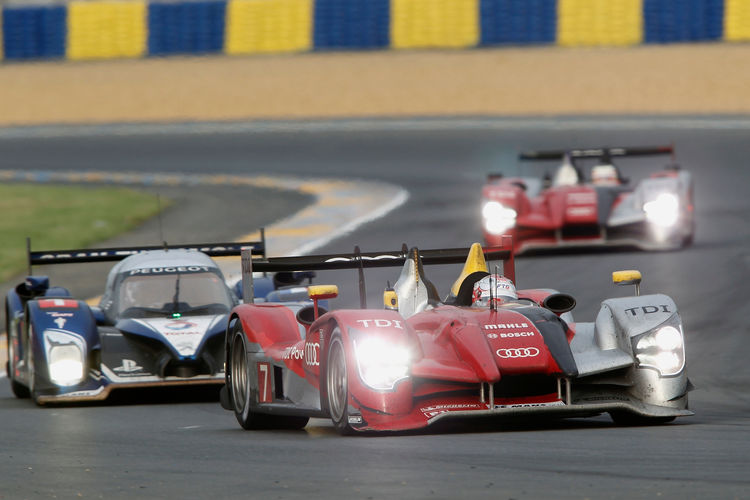 The 1000-kilometer race at Silverstone (Great Britain) on September 12 marks the beginning of a new era for Audi and the sports car scene: for the first time since 1992, there will be a worldwide racing series for Le Mans prototypes again. Audi Sport Team Joest will contest the series with two R15 TDI cars.

Silverstone, Road Atlanta, Zhuhai – three races in three different continents at the end of the 2010 sports car season will give sports car fans a foretaste of the year 2011. Next year, a total of seven endurance races are planned for the so called “Intercontinental Le Mans Cup” (ILMC).

47 vehicles have been entered in the ILMC inaugural race at Silverstone, as many as twelve of them in the top class, LMP1, whose “king” has traditionally been the Le Mans winner. This year it was the Audi R15 TDI which is powered by a V10 TDI engine delivering about 440 kW and – as is typical for Audi – features numerous innovative technical details.

In June the outstanding reliability of the R15 TDI in the fastest 24-hour race in Le Mans history was crucial. “In the shorter ILMC races we mustn’t just rely on this factor,” says Head of Audi Motorsport Dr. Wolfgang Ullrich. “The performance has got to be right.”

To be optimally prepared for the three races of the 2010 Intercontinental Le Mans Cup, the aerodynamics of the Le Mans winning car was modified and trimmed toward more downforce because there are no straights at Silverstone, Road Atlanta and Zhuhai which are as long as those at Le Mans.

In addition, Audi has formed a “dream team” for the ILMC races with Tom Kristensen and Allan McNish. Kristensen, who with eight exploits under his belt is the record winner of the Le Mans 24 Hours, was voted “Sports Car Driver of the Decade” by the British “Autosport” magazine last winter. Allan McNish finished the same voting as the runner-up. Now the two will go on the chase for points in a racing series together for the first time.

A look at the winners’ list shows that Allan McNish is a safe bet particularly at Silverstone: the Scotsman has competed in his “home round” as many as three times for Audi, and finished three times on the very top of the podium – most recently in 2008 when he clinched the first victory of the Audi R10 TDI in the Le Mans Series together with Dindo Capello.

Another high-caliber pairing has been formed for the “sister” car. Capello will contest all three races of the 2010 Intercontinental Le Mans Cup for Audi. At Silverstone, he will be running alongside Timo Bernhard, one of the three reigning Le Mans winners.

In tests at the EuroSpeedway Lausitz, all four Audi drivers prepared themselves last week for the Silverstone race that will start on Sunday (September 12) at 11:55 hrs, local time (12:55 hrs in Germany). Eurosport will air live broadcasts of the starting and final phases.

- How powerful will the Audi R15 TDI be with modified aerodynamics?
- How strong will the newly formed duo of Tom Kristensen/Allan McNish be?
- How quickly will Timo Bernhard and Dindo Capello be able to adjust to each other?
- Will the race attract a similar crowd as in 2008 when 53,000 fans witnessed a victory of the Audi R10 TDI?
- How will the new track layout affect the set-up of the prototypes?

Dr. Wolfgang Ullrich (Head of Audi Motorsport): “Ever since Audi has been active in Le Mans prototype racing we’ve supported the idea of a worldwide racing series with these fascinating vehicles. Now the idea has become reality thanks to the ACO. Audi has shaped the sports prototype scene in the past ten years like no other car manufacturer and with the nine Le Mans victories and numerous titles clinched so far has been impressively demonstrating ‘Vorsprung durch Technik.’ Although we’ll have very strong rivals and before Silverstone don’t know exactly where we stand with our R15 plus that has been trimmed for more downforce we’ve always just got one goal at Audi, and that’s victory.”

Ralf Jüttner (Technical Director Audi Sport Team Joest): “The track has changed since our last race there in 2008: we’re driving the new version like Formula 1. The transition in the new section is said to be a bit bumpy. Other than that there are the typical places like Backetts, Maggotts and so on – so the old Silverstone flair should still exist. After Le Mans we’ve tried to come up with some more downforce on the car and we’ve got to handle on that in the short time that’s available on the race weekend. The team knows that we’ve got strong rivals and that the race is shorter than Le Mans.”

Timo Bernhard (29/D), Audi R15 TDI #8 (Audi Sport Team Joest)
- Winner of the 2010 Le Mans 24 Hours with the Audi R15 TDI
- Most recently contested a race at Silverstone in the Porsche Supercup
“I’m happy that after the huge exploit at Le Mans Audi has selected me again this season. I’m by far the youngest one in the squad and think that I’ll form a good crew with Dindo (Capello). Silverstone is new for me in the prototype but that wasn’t a problem at Le Mans and Spa either. Silverstone marks the beginning of a new era for the sports cars – and I’m happy to be part of it. The race has a superb field. It shows that the trend is pointing in the right direction.”

Dindo Capello (46/I), Audi R15 TDI #8 (Audi Sport Team Joest)
- With 29 overall victories under his belt is the most successful racer in the American Le Mans Series
- Won at Silverstone in 2008 together with Allan McNish
- Is sharing the cockpit with Timo Bernhard for the first time
“I’ve never had such a long summer break in my career before. After almost three months I’m glad to finally be able to shift into ‘race mode’ again and to sit in the Audi Audi R15 TDI. Even though our rivals are well prepared and have more experience with their car, which has a lot of downforce, I’m confident that we’ll at least be on an equal footing. Not sharing the car with Allan (McNish) and Tom (Kristensen) for the first time in many years is a new experience for me. I’ll have to be careful not to get into the wrong cockpit at the pit stop ... But I believe that Timo (Bernhard) and I’ll form a good duo and that we’ll have some hot battles with our team colleagues. Timo showed at Le Mans that he is strong, fast and reliable.”

Tom Kristensen (43/DK), Audi R15 TDI #7 (Audi Sport Team Joest)
- With a track record of eight wins is the “King of Le Mans”
- Contests a complete sports car series for the first time since the 2002 ALMS
- Won the 1998 Formula 3000 race at Silverstone
“After suffering a bit from the ‘heel tendon’ issue at the beginning of the year, I’m very happy that my second sports car career is now starting ‘full time.’ It’s great being able to tackle the new racing series together with Audi and Team Joest – and of course together with Allan (McNish), too. It’s also high time to return to Silverstone again. I’ve only driven there twice and won both times – most recently in the BTCC, in 2000. The track has changed a bit since then and has new sections that look challenging because there seem to be bumps in fast corners and a slow complex. I’m very excited about it.”

Allan McNish (40/GB), Audi R15 TDI #7 (Audi Sport Team Joest)
- Winner in 2004, 2005 and 2008 (with different team colleagues, respectively)
- Shares a cockpit exclusively with Tom Kristensen for the first time
“It is important that Tom (Kristensen) and I, and of course Audi, get off to a good start in that Championship as Peugeot, our main competition over the last three years, will be keen for revenge especially after Audi’s 1-2-3 result at Le Mans in June. Silverstone marks the first time Audi and Peugeot have faced each other since Le Mans so you can expect fireworks and a titanic fight between us. The Audi R15 TDI has already won two out of the three races we’ve done this year and ‘TK’ and I will be fighting hard to make it a third win on what is the R15 TDI’s UK race debut.”

The Audi drivers at Silverstone

Allan McNish about Silverstone: “I always like racing at Silverstone. In fact, I had my first ever car race there and I have had success on all the variants of the track since then. I have only seen the new track layout on television. It still has the long, fast section from Copse to Club and then the slower section back to the start-finish line. I don’t think the track will be any easier but actually more complicated for set-up with aerodynamic grip and balance being important in the first part and mechanical grip and balance in the second part. I am sure it will, as always, produce a good, exciting race.”