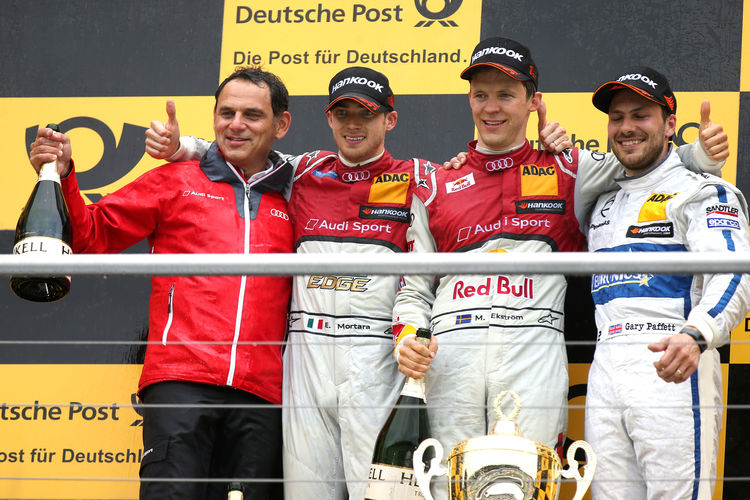 In DTM races three and four of the season to be held at the Lausitzring on the last weekend in May, Audi drivers Edoardo Mortara and Mattias Ekström are set on defending their double lead of the standings. Plus, together with their six brand colleagues, they’re determined to eliminate the preconceived notion that the race track in Brandenburg doesn’t suit Audi once and for all.

“No doubt there’ve been times when Audi was having a harder time at the Lausitzring with its many long, slow corners than on other race tracks,” Mattias Ekström, the winner of the second race of the season opener at Hockenheim, said during a telephone conference before the next DTM meeting. “But I’ve also won here twice and celebrated the first DTM podium in my career here in 2001. Audi’s been making a lot of progress in recent years with the RS 5 DTM on tracks with these characteristics.” Audi’s results in last year’s qualifying at the Lausitzring support this statement. Ekström spearheaded an Audi trio there in positions two, three and four on the grid. “That things didn’t run so smoothly in the race, at least for me, was definitely not the car’s fault,” the Swede added.

His brand colleague Edoardo Mortara managed an even more successful start to the 2015 season than Mattias Ekström. The Italian, who lives in Geneva, is traveling to a DTM race as the leader of the standings for the first time following positions four and two at Hockenheim. With 30 points, he is five points ahead of Ekström and the British Audi driver Jamie Green, who had decided the first race of the season in his favor. A nice feeling, says Mortara – but that’s all. Mortara: “Hockenheim was no doubt a good start for me but there are still a lot of races to go. And it’s more important to be at the top of the standings at the end of the season than at the beginning.”

Despite the four-week break Mortara didn’t have a lot of time to unwind and enjoy his lead of the standings anyway. Besides preparing for the race weekend at the Lausitzring the part-time restaurateur was driving the opening of a branch of his Geneva sushi restaurant Moshimoshi.

Ekström used the time between the two DTM events for a run in the World Rallycross Championship, clinching second place in the Audi S1 EKS RX quattro. Now he’s looking forward to the Lausitzring: “The fans there are some of the coolest in the DTM. Driving past the full grandstands, that’s really impressive. And when you’re standing on podium across from the grandstands listening to your own national anthem you get goosebumps, if not earlier.” There’s no doubt in either driver’s mind that the leap onto the podium at the Lausitzrung can be achieved: “We’ve got a strong car that anything’s possible with if we extract the optimum from it.”