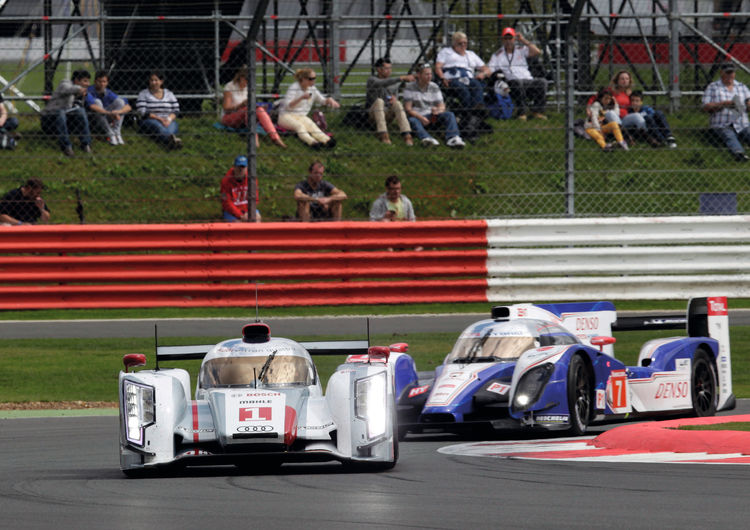 In an exciting battle of the concepts the hybrid technology in the Audi R18e-tron quattro also proved victorious in the fourth race of the FIA World Endurance Championship, WEC, at Silverstone.
Download PDF (154 KB)
Facebook
Twitter
LinkedIn
WhatsApp

Audi with perfect record at half-way stage: In an exciting battle of the concepts the hybrid technology in the Audi R18 e-tron quattro also proved victorious in the fourth race of the FIA World Endurance Championship, WEC. At the 24 Hours of Le Mans, Audi wrote history after taking victory with a hybrid car for the first time, now the second win followed. At both events Marcel Fässler/André Lotterer/Benoît Tréluyer were at the wheel of the victorious car with start number ‘1’.

Audi builds the most efficient sportscars – this was clearly visible at round four of the WEC. During the six hours of the race Marcel Fässler/André Lotterer/Benoît Tréluyer required only six pits stops with their hybrid car and thus two less than the second-placed Nicolas Lapierre/Kazuki Nakajima/Alexander Wurz who use another hybrid concept. The result is all the more remarkable because the triumphant Audi was awarded a stop-and-go penalty by the race director. The reason: Benoît Tréluyer was involved in an unfortunate accident with a GT car just before the end of the first third of the race. The car of the three Le Mans winners lost 32 seconds as a result, at the finish the winning margin was still 55 seconds.

In addition to the fourth race victory, Audi also has another reason to celebrate: the brand from Ingolstadt holds an unassailable lead in the WEC Manufacturers’ Championship. After four titles in the Rally World Championship between 1982 and 1984 as well as victory in the FIA Touring Car World Cup in 1995, Audi has once again won another World title. *

In contrast, the excitement in the drivers’ classification increases following a change of leaders: after their second win Fässler/Lotterer/Tréluyer head the standings for the first time this season. At the half-way stage they hold a small 4.5 point lead from former leaders Tom Kristensen and Allan McNish.

The Danish-Scottish duo was plagued by bad luck on their way to third place at Silverstone. The two Audi works drivers had to settle for third place in their Audi R18 ultra after having to make an unscheduled pit stop. Only a few minutes after McNish had taken over driving duties a slow puncture on the right rear forced him to make a tire change. As a result, the sportscar, powered by a conventionally powered V6-TDI engine, lost a lap early in the race and thus any chance of playing a bigger role in the intense battle of the concepts. The car still reached the finish only 19 seconds behind the second placed Toyota.

Audi starts the fifth round of the WEC in only three weeks time. Local matador Lucas di Grassi reinforces the Audi driver line-up as team mate to Allan McNish and Tom Kristensen.