Audi works team on the way to China

{{ activeItem() }}
Twitter
10/27/20
“MQ! always stands for innovation and surprises, and this spirit should be reflected in the new digital experience… https://t.co/JFYRXAHHH5
10/24/20
75 years of taking action for #peace, #humanrights and #sustainable development – happy birthday, @UN. We are proud… https://t.co/LPUwbLYMj5
10/23/20
Intelligent assistant for #electric driving – the #Audi #etron route planner. Once on the #road, you can rely on tr… https://t.co/mxwv0OgVUM
10/22/20
Get ready for @tristanharris: The co-founder at @HumaneTech_ and former Google Design Ethicist will share his knowl… https://t.co/4NHaJM7bj5
Audi on Twitter
YouTube
10/14/20 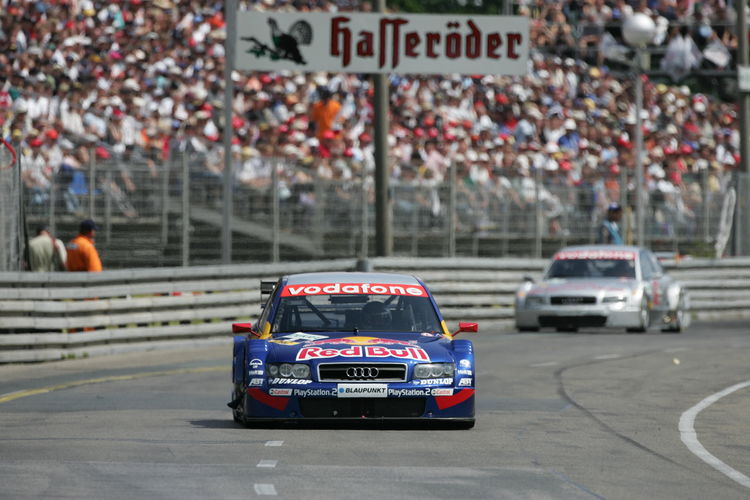 On 17th and 18th July the DTM will stage an invitation race in Shanghai. The two Audi works teams of Audi Sport Team Abt Sportsline and Audi Sport Infineon Team Joest will compete with a total of eight cars at the “East Race Festival” in the Chinese metropolis. Most of the DTM teams enter unknown territory in Shanghai, whereas for Audi it is not the first race in China: The legendary Audi quattro won the Hong Kong-Peking rally twice in succession in 1985 and 1986. Today, Audi is the leading automobile manufacturer in the premium segment in China; the A4 and A6 models for the Chinese market are produced at the Changchun factory.

Although no championship points will be awarded for each of the two 30 minute races in Shanghai, the Audi works team wants to make a good impression in front of the Chinese public. In addition to the six Audi DTM regulars (Christian Abt, Frank Biela, Mattias Ekström, Tom Kristensen, Emanuele Pirro and Martin Tomczyk) Rinaldo Capello and Peter Terting also start. The Italian driver drives an additional Audi A4 DTM looked after by the Joest team. “Star of Tomorrow” driver Terting drives one of last season’s Abt-Audi TT-R racers.

An additional Abt-Audi TT-R is in action in Shanghai as DTM race-taxi. Furthermore, two cars from past AUDI AG motorsport successes will be presented in China: The spectacular Audi 90 IMSA-GTO from the 1989 season and the Le Mans winning R8 sports car complete some demonstration laps together with an Audi A4 DTM, an Audi A4 Safety Car and the Audi Le Mans quattro concept car at the new Formula 1 circuit in Shanghai.

The DTM race will be held on a street circuit in the city centre. The first of the two races will be started on Sunday 18th July at 13:10 local time. ARD will broadcast live from China as of 8:30 A.M. The Chinese television stations Shanghai TV and CCTV 5 will probably also broadcast the DTM guest race live.

Mattias Ekström (Audi Sport Team Abt / Audi A4 DTM #5): “I’m doubly excited about Shanghai: Firstly, we get the chance to drive on another street circuit immediately after Norisring, which is what I particularly like. And secondly, after a couple of days in Sweden I noticed that a five week break from the DTM is simply too long for me. It’s the same whether we fight for points or not: Just like every other DTM race, I also want to win in Shanghai.”

Martin Tomczyk (Audi Sport Team Abt / Audi A4 DTM #6): “I have never competed in a race so far away from Germany. I’ve just seen the first photographs of the paddock under construction and the circuit, and can now hardly wait for take off to Shanghai. For the first time in the DTM every driver starts on a level playing field as nobody knows a single metre of the circuit. I’m interested to see who gets to grips with the circuit most easily.”

Christian Abt (Audi Sport Team Abt Sportsline / Audi A4 DTM #11): “Till now I was only in Asia during my Formula 3 times for the race in Macau. Shanghai is supposed to be a super city, which one has to have seen. Street circuits always suit my style, that’s why I’m looking forward to the race. As it is a non-championship race, I can drive without having to think about points or tactics, and show my skills.”

Tom Kristensen (Audi Sport Team Abt Sportsline / Audi A4 DTM #12): “In the past I spent several years in Asia and know exactly how enthusiastic the people are there about motorsport. It is fabulous to belong to the first people to compete in a race in Shanghai. It is a city full of contrasts, on the one hand high, modern skyscrapers and simple neighbourhoods on the other.”

Rinaldo Capello (Audi Sport Infineon Team Joest / Audi A4 DTM #22): “After six years of sports cars, I can hardly wait for my first touring car race. Obviously the switch from an Audi R8 to the A4 DTM is big. However, I have tested the DTM car and now believe that I know what the DTM is all about. That’s why I’m hoping for a good result in Shanghai.“

Peter Terting (Audi Sport Team Abt Sportsline / Abt-Audi TT-R #23): “I’ve made a seat fitting and completed the roll-out in the DTM car. It’s a great feeling, after the break, to be working with the DTM squad again – I feel a little like I did last year. Of course my goal in Shanghai is to make a good impression. But secretly I really hope to leave at least one A4 behind me.”

Emanuele Pirro (Audi Sport Infineon Team Joest / Audi A4 DTM #44): “I’m really looking forward to the race in Shanghai. I was in China four times last year with the Audi R8 and have since got to know and respect this interesting country. It is fabulous that we can compete in such a hard fought series like the DTM in such an up-and-coming city like Shanghai. I hope that I’m just as successful on the Chinese market as Audi is.”

Frank Biela (Audi Sport Infineon Team Joest / Audi A4 DTM #45): “I’ve always found new things motivating, that’s why I’m interested to see Shanghai and China. In general I’m a big fan of street circuits. However, it is extremely important to have a car that suits your driving style on street circuits. In the meantime, I know just how valuable every kilometre of experience in the DTM is. That’s why it was important that we were able to test after Norisring and learn a few things in the process. Now we’ll have to try and put them into practice.”

Hans-Jürgen Abt (Team Director Audi Sport Team Abt Sportsline): “Although this is ‘only’ an invitation race, we are preparing ourselves with the same level of professionalism that we do for every championship race. For the Audi brand, the race in this important market is one of the most significant events of the year, and whatever happens we want to make a good impression there. It’s a great feeling to have the privilege of breaking new ground for motorsport in Shanghai.”

Ralf Jüttner (Technical Director Audi Sport Infineon Team Joest): “As far as the temperature forecast is concerned, our test in Adria could prove to be good preparation, as it was also very hot there. However, the humidity in Shanghai will be even more extreme. The time and effort involved in the event organisation is also quite high, but I’m convinced that in spite of all the stress it will be a great experience to race in a city with 15 million inhabitants. It will be a gigantic spectacle. I can only hope that our cars return undamaged to Germany – as we drive the next DTM race two weeks later at the Nürburgring.”

Dr. Wolfgang Ullrich (Audi Motorsport Head): “Even if the race in Shanghai does not count towards the championship, it is however very important for Audi. China is one of the most important markets and we obviously want to make a good impression in front of the Chinese public – preferably with a victory. Apparently the circuit in Shanghai has very quick corners that should suit our A4 very well.”