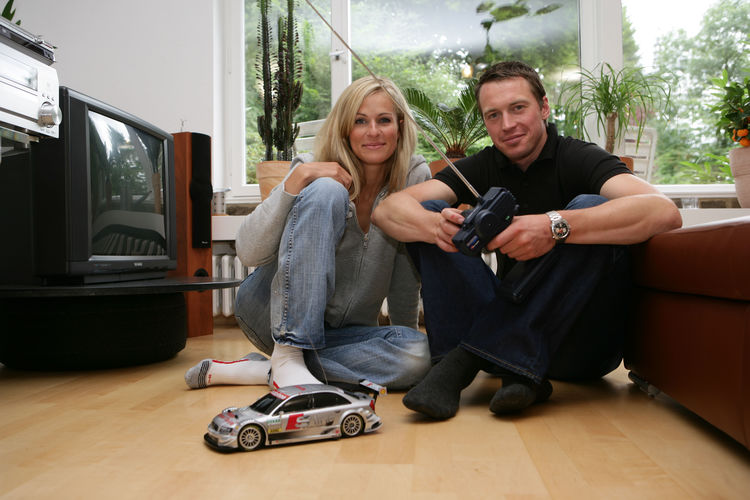 Whoever wants to pay Frank Stippler a visit at home does not have to worry about getting a detailed map. “Stippi? He lives down there”, shouts the neighbour over the garden fence while pointing with the right-hand down the hill. In a modest town like Bad Münstereifel everybody knows each other, and all the more so when the person in question is one of the town’s most famous sons: After making a guest appearance in the 24 Hour race last year, the 30-year-old Stippler is an official Audi “works” driver this season, and drives a 2004 championship winning Audi A4 DTM for Audi Sport Team Joest.

Although he now measures himself against the likes of world stars such as Heinz-Harald Frentzen or Mika Häkkinen, the passionate cyclist is still the same old “Stippi” from next door. He is more than a match for the ex-Former 1 drivers in the DTM – their star allures that occasionally come to light are nevertheless more than a little strange for the likeable man from the Eifel. Frank Stippler’s residence resembles a small castle: The spacious and captivating house full of nooks and crannies, which he shares with his parents, their dog Moritz and, for quite a while now, also his girlfriend Eve, lies on a slope overlooking the health resort with a population of almost 20,000. The close bond to motorsport does not escape the visitor's eye for a second. Whether it is the hall, kitchen or on the living room table, which, quite obviously, is made with a racing tyre: In every square metre of the house, trophies, models, posters, magazines, photographs or other mementoes bare testimony to Stippler’s passion for automobiles and horse-power.

The route to top class touring car sport was in no way whatsoever a gentle stroll for the man born and bred in Cologne. Indeed, for the former motor vehicle apprentice it was already perfectly clear at 16-years of age that his future should have something to do with four wheels. However, Stippler chose sit out the classic, but somewhat expensive route via karting. With his father’s help he built a Group H touring car and shortly after scored his first class win. A career in Porsche Cup racing followed, where, in 2003, Stippler became the first driver ever to pull off the stunt of winning both the national Carrera Cup and international Supercup championships.

Even though he steers a high-tech Audi A4 DTM touring car today, the passion for historic cars remains – no longer on track, but on the winding roads in the Eifel. It goes without saying that the 1969 Alfa Romeo Giula Sprint GT is unleashed on the many winding roads surrounding the Nürburgring – but only when the weather is good. That such a gem is not only fun but also involves a huge amount of work is no problem for Frank Stippler: Last year, in which he secured a seat in the “works” team after driving for Audi in the 24 Hour race around the Nordschleife, the qualified mechanic also finished his engineering degree.

Frank Stippler shares his fascination for historic cars and motorsport with his father, who is not only found dressed in a boiler-suit helping his son in the pits, but who also forms a strong foundation in his son’s career. It is not without good reason that Frank Stippler says: “One of the finest moments was when I could go to my father and say, ‘I’m an Audi works driver’, ten years after he had helped me enormously to make my break into historical motorsport”. Even today his father assumes responsibility for the day-to-day business and all the paperwork, so that his son has a clear head for his job as a “works” driver, his activities for quattro GmbH and taking care of personal sponsors.

While his father and girlfriend Eve Scheer – the actress and presenter who also competes on the track– keep their fingers crossed for him in the pit garage, the DTM is too nail-bighting for Stippler’s mother. Punctually on Sunday just before two o’clock she sneaks off to the large terrace overlooking the countryside and waits till the chequered flag falls. For this season’s race at the Nürburgring she plucked up enough courage to cast a glance at the television and watched the start “live”. Fresh air was again the order of the day even before her protégé had completed the first lap.