Audi with two cars in front at the Norisring 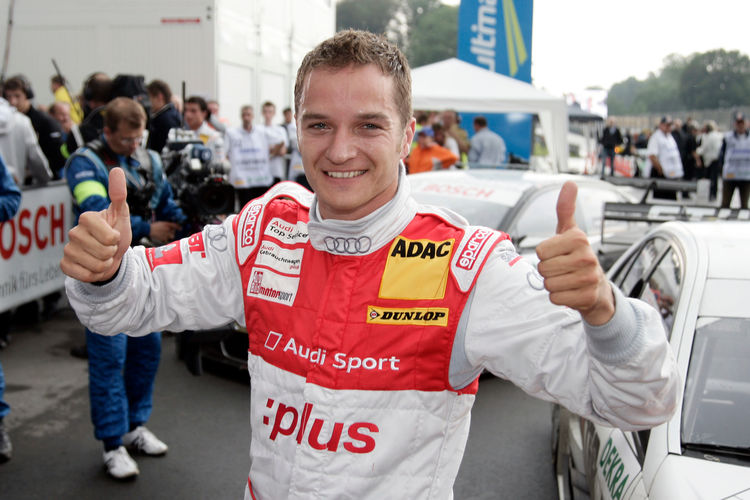 On Sunday, Audi will start to the season highlight at the Norisring with two cars in front: In a dramatic qualifying, title defender and leader of the standings Timo Scheider took the pole position in front of his teammate Mattias Ekström. This means that at Audi’s “home race” at the Norisring two Audi A4 DTM cars will be starting from the front row for the first time ever.

Ekström and Scheider, the DTM Champions in 2004, 2007 and 2008, did the best job of handling the track conditions on the 2.3-kilometer city street circuit that kept changing after a thunder shower. In the crucial “shoot-out” of the quickest four, Audi Sport Team Abt Sportsline opted for used slicks and hit the bull’s eye. On the track that was not completely dry yet, Scheider and Ekström, managed keeping the two Mercedes drivers Bruno Spengler and Gary Paffett at bay.

“We thought slicks that had been used for several laps might be slightly better in these conditions than new tires and that decision turned out to be the right one,” said a pleased Head of Audi Motorsport Dr. Wolfgang Ullrich. “After that, our guys simply drove two perfect laps. That’s a good starting base to finally clinch an Audi victory again at the Norisring tomorrow.”

For Audi, this is the first pole position at the Norisring since 2005 (Tom Kristensen) and the fifth in a row in the DTM. Timo Scheider will start to a DTM race from the top grid position for the first time since the race at Brands Hatch in August 2008.

“Today, it was easy to make the wrong decisions but we made the right ones,” said Scheider. “It’s fantastic taking the pole position for Audi here at the Norisring of all venues. I want to thank my race engineer Armin Plietsch for giving me exactly the right setup for these changing conditions.”

Katherine Legge, as well, showed an impressive performance: With grid position five, the Briton, who is familiar with city street races from her days in the Champ Car Series in the United States, managed the best qualifying result achieved by a woman in the history of the new DTM. In addition, she posted the fastest time in a year-old car.

For Tom Kristensen (9th), Mike Rockenfeller (12th), Martin Tomczyk (13th) and Alexandre Prémat (14th) on the other hand the qualifying was over as early as after the second of the four sessions. Oliver Jarvis (17th) was out after the first section.

Markus Winkelhock whose A4 was heavily damaged in a bizarre incident in free practice on Saturday morning was not able to participate in qualifying at all. At full speed, Winkelhock hit a manhole cover that had come loose on the start-finish straight. After the incident, practice had to be stopped for two hours before the track was opened again. Audi Sport Team Rosberg is doing everything within their means to repair the car in time for warm-up on Sunday morning.