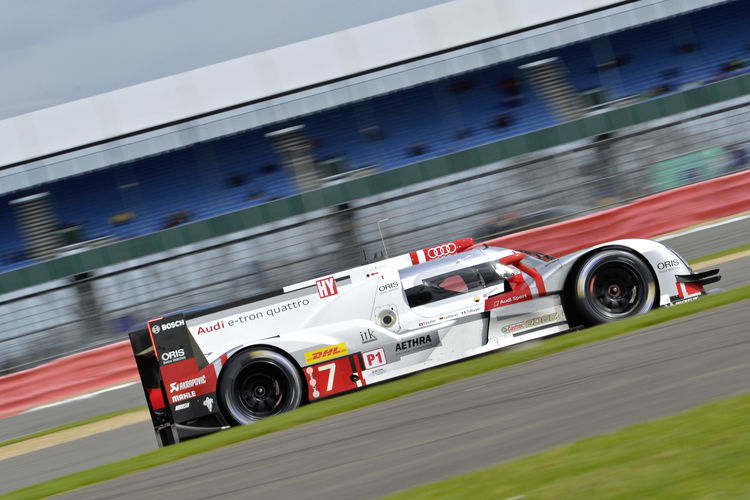 Audi Sport managed a dream start of the 2015 motorsport year. In the season opener of the FIA World Endurance Championship (WEC) at Silverstone, the Audi R18 e-tron quattro of Marcel Fässler, André Lotterer and Benoît Tréluyer took victory after a thrilling six-hour race in which the lead kept changing and was fiercely contested.

If the 6-hour race in the United Kingdom provided a foretaste of the season, motorsport fans can look forward to an exciting WEC year. Audi, Toyota and Porsche fought a three-way battle with numerous overtaking maneuvers and door-to-door fighting for positions from almost start to finish. When the checkered flag fell, the number ‘7’ Audi R18 e-tron quattro hybrid sports car was running in front and decided the race in its favor with a 4.610-second advantage. The sister car of Lucas di Grassi, Loïc Duval and Oliver Jarvis took fifth place following two unscheduled pit stops.

“Congratulations to Marcel, André and Ben, who delivered fantastic motorsport for six hours today,” said Head of Audi Motorsport Dr. Wolfgang Ullrich. “This victory is a dream start of the season and a great reward for the whole squad for the hard work last winter. At the same time, this success motivates us even more for the great challenges awaiting us the next few weeks. The weekend at Silverstone has also shown that we could be facing what may be the most thrilling and fiercely contested WEC season ever.”

At the beginning, events in the race did not seem to augur well for car number ‘7.’  As the correct gear could not immediately be engaged, Benoît Tréluyer, who had started from position five, lost a lot of ground and had to battle his way forwards again through half of the field on the first laps. After two and a half hours, André Lotterer took over driving duties from Marcel Fässler and 30 minutes later the lead in the race. “A perfect day for Audi and for our team,” said Lotterer. “We were under pressure from the first to the last lap and could not afford to slip. We managed to do this and the team did everything right at the pit stops and with the perfect strategy. Now, we’re going to take this momentum with us to Spa and to Le Mans.” The gripping duel between Marcel Fässler and Porsche driver Neel Jani across many laps in which the two Swiss overtook each other several times per lap, was particularly impressive.

For the number ‘8’ sister car, a top result seemed to be within reach as well. But two repair stops in which the rear bodywork had to be replaced following contact with a rival and the fixings of the front hood subsequently had to be fastened, cost Lucas di Grassi, Loïc Duval and Oliver Jarvis about seven minutes and, as a result, all chances of clinching a podium place. After starting from the second row, the Brazilian-French-British trio had to settle for fifth place. “A fantastic day for Audi, but obviously the three of us are somewhat disappointed,” said Oliver Jarvis. “Still, we have positive impressions: a thrilling race and the first victory for our new R18 e-tron quattro – this whets our appetite for the WEC season.”

Fans will not have to wait long for the next appearance of the Audi R18 e-tron quattro. In just three weeks from now (May 2) round two of the FIA World Endurance Championship will be held at Spa-Francorchamps (B). For Audi, the race on the famous circuit in the Ardennes marks a ‘dress rehearsal’ for the season’s pinnacle event, the Le Mans 24 Hours. To prepare for Le Mans, Audi Sport Team Joest  will be fielding the third hybrid sports car, designated as number ‘9,’ that will be driven by Filipe Albuquerque (P), Marco Bonanomi (I) and René Rast (D).