Skip to content
Please participate in our survey and help us improve the Audi MediaCenter. Thank you!
Go to survey
10/14/22
London/Neckarsulm
Technology 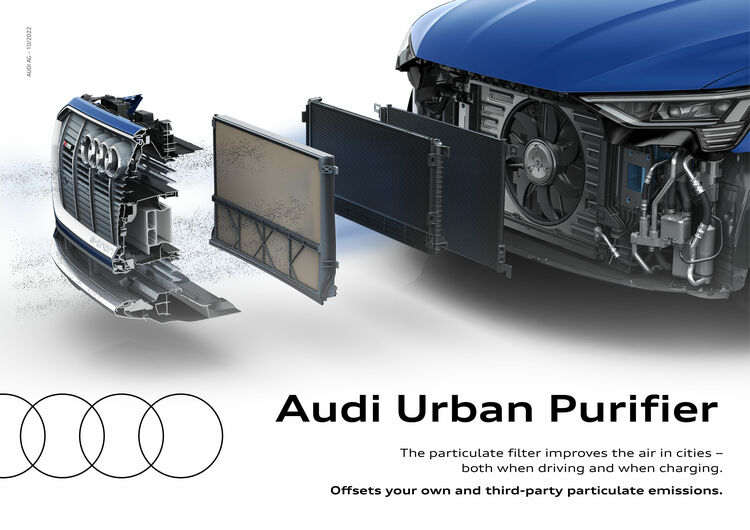 In a pilot project, Audi is working with supplier MANN+HUMMEL to develop a particulate filter for electric cars that collects particulate matter from the surrounding area. Both while driving and charging, it is to already help improve air quality in cities during a first pilot phase. The innovative technology will be demonstrated at the GREENTECH FESTIVAL in London.

Regardless of a vehicle’s drive system, 85% of fine dust in road traffic is caused by brake, tire, or road abrasion. The smallest dust particles, hardly noticeable to the naked eye, are only a few micrometers in size with a diameter of only 10 micrometers and can therefore be easily inhaled. In the past year, the World Health Organization (WHO) has recommended significantly lower particulate matter limits than in the past but according to experts, it would be impossible to comply with these new values in many urban areas in Germany.

Audi places sustainability at the heart of its activities and takes responsibility for the environment and society. The company strives to make production net-carbon-neutral1 and to reduce emissions where possible. Together with the supplier MANN+HUMMEL, Audi has now developed a filter for the front end that can collect particulate matter from its environment; it functions similarly to stationary systems that are already in use in some cities. The mobile version ensures not only are the car’s own particulate emissions absorbed, such as those of an Audi e-tron, but those of other vehicles can be absorbed as well – right where they are generated.

The pilot project was launched in 2020 and will run for a period of four years, Fabian Groh, Project Manager in Attachment System Development at AUDI AG, explains: “This particulate filter is an example of our pursuit of innovation for everyone’s benefit and a successful collaboration with specialized suppliers. We are already doing a lot today on our own initiative. We anticipate it will also become a legal requirement in the future.”

The filter is integrated into the vehicle’s existing airflow in front of the radiator so that only a few modifications to the car are necessary, keeping costs down. The filter element is controlled via the switchable cooling air inlet and its mechanical function is comparable to that of a vacuum cleaner. By a similar principle, the fine dust particles remain stuck in the filter and the air can still flow through it.

Thus far, the filter has been used in Audi e-tron test vehicles. While driving, it passively filters by means of the movement of the vehicle; air flows through the filter system, which captures even the smallest particles. Another possibility is filtering during stationary charging. A fan that is already built into every electric vehicle conveys ambient air through the radiator – the system takes advantage of this process and can thus actively filter the air flowing through it, using the fine dust filter, ensuring the smallest particles are absorbed, even when stationary. This is ideal for use in urban environments, where the particulate matter pollution is much higher than in rural areas.

The assessments conducted on the test vehicles were not only used to analyze the effectiveness of the filters, but also to determine whether the technology affects overall vehicle usage. After over 50,000 kilometers (31,068 mi.) of endurance tests on the Audi e-tron, the answer was clear: the filters have no negative effect on the operation of the electric vehicle, including on hot summer days or during fast charging.

The system is so effective that, depending on the usage scenario, the Audi e-tron particles are completely filtered out in a highly polluted city such as Stuttgart. In even more polluted cities fine dust emissions can be actively and passively absorbed by up to three vehicles in a typical customer scenario. To make the system even more efficient, Audi is working with MANN+HUMMEL to connect with existing sensors such as weather stations, plus they plan to develop a display logic in the vehicle, allowing passengers to determine when the system is active and how much has already been filtered.

Filter System with a High Proportion of Recyclates

The filter is easy to maintain and must only be replaced when the regular service interval has been reached. A lifecycle analysis of the entire filter system has shown that it will account for 14.9 kilograms (32.8 lbs.) of CO2 equivalents. Additionally, the filter itself consists of 15% recycled material and the entire system is 60% recycled.

More information, illustrations, and exhibits on the Audi Urban Purifier will be available at the GREENTECH FESTIVAL in London, October 13th and 14th.

1Audi understands net-zero carbon emissions to mean a situation in which, after other possible reduction measures have been exhausted, the company offsets the carbon emitted by Audi’s products or activities and/or the carbon emissions that currently cannot be avoided in the supply chain, manufacturing, and recycling of Audi vehicles through voluntary offsetting projects carried out worldwide. In this context, carbon emissions generated during a vehicle’s utilization stage, i.e. from the moment it is delivered to the customer, are not taken into account.