Skip to content
We are using cookies for a better user experience.
04/06/18
Neuburg a. d. Donau
Sport

Audi to race Rome for the first time with Formula E

{{ activeItem() }}
Twitter
09/21/21
Electrifying collaborations. Audi has teamed up with American rally and rallycross driver @kblock43. Together with… https://t.co/lx3ufgWERt
09/21/21
From the USA to Germany, we are welcoming an iconic driver to the Audi team. Get ready for a new type of high perfo… https://t.co/ah5piCTqmT
09/20/21
Experiencing progress and electrifying performance. The @FCBayern team joined us for an afternoon at the Audi drivi… https://t.co/tpL9flroBT
09/20/21
On the way to its debut in the Dakar Rally 2022. @audisport has tested the Audi RS Q e-tron for almost two weeks in… https://t.co/2RNJldizcI
Audi on Twitter
YouTube
09/21/21

Welcoming a legend to the Audi team

When a thrill-seeker meets electric icons of the past and future. United by a passion for high performance, we have teamed up with racer, drifter and record-breaker. Charged for an exciting journey, this is the start of new chapter of thrilling progress. #FutureIsAnAttitude #Audi #AudiSport #etron #RoadToDakar #Dakar2022 -------------------- *This vehicle shown here is the Rally Dakar vehicle that is not available as a production model.
09/20/21 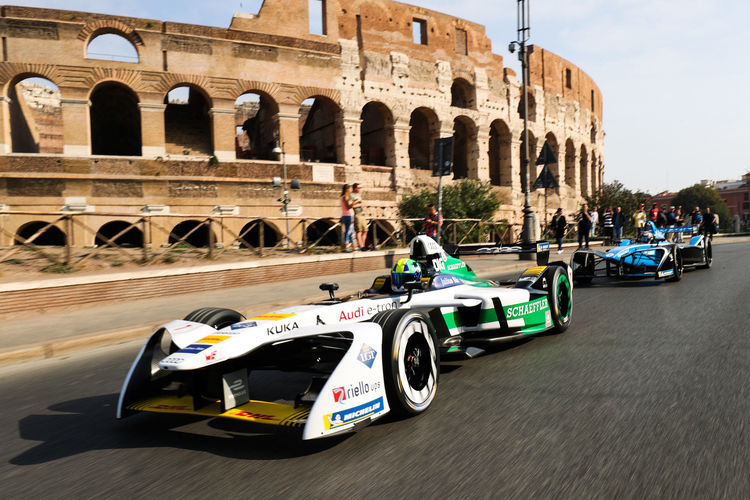 Formula E is arriving in Europe. On Saturday, April 14, the electric racing series will make its debut in the streets of Rome. The German Audi Sport ABT Schaeffler team with Daniel Abt and Lucas di Grassi wants to focus on further success in Italy’s capital city. Most recently, they scored victory in Mexico and a second place in Uruguay.

Asia, Africa, South and Middle America and now Europe: On its world tour, Formula E will stop in Rome for the first time. A race of 33 laps is to be covered by the drivers on the 2.860-kilometer city circuit that leads right through the “Esposizione Universale di Roma (EUR)” world fair district and along the spectacular “La Nuvola” convention center. It is the seventh race of a total of twelve this season. Following victory in Mexico and second place in Uruguay, Daniel Abt and Lucas di Grassi are traveling to the Eternal City highly motivated.

“Italy is like a second home for me. My grandparents were born there, I have an Italian passport and plenty of Italian blood running in my veins,” says the the reigning champion, di Grassi. “The track looks incredibly challenging: fast sections, slow sections, several overtaking opportunities – the fans are going to experience a real Formula E highlight.” The aim following the podium in Punta del Este is clear: “A look at the championship standings shows that we’ve got a lot to win and little to lose. I’m going to give my all to clinch my first victory this season and to make the many fans and guests of Audi proud.”

His teammate, Daniel Abt, is currently the best German in the overall standings. “A new city and a completely new circuit are always a real challenge for the drivers and engineers. It’s great that Formula E is now traveling to Europe with its very large fan community and huge interest,” says Abt. “As a racer, the last event in Uruguay with zero points is water under the bridge for me. Now I’m set on returning with my team to where we were in Mexico: on podium.”

For Team Principal Allan McNish, the season is only now really picking up momentum. “In the last two races, we found our old strength again and Daniel and Lucas were fighting at the front in qualifying and the race and that is exactly how we want to continue in Rome. But to be on the podium the whole team needs to have a fast and clean weekend because the intense Formula E race format punishes mistakes,” says the Scotsman. In addition, there is huge interest in the Italian premiere. McNish: “There will be a great amount of attention from fans, media and of course from Audi employees at this new and fascinating race in Rome. I am sure it will be a close, hard-fought race.”

Round seven of the 2017/2018 Formula E will start on Saturday at 4 pm, local time. In Germany, Eurosport will start airing live coverage at 3.45 pm (CEST). Around the globe, some 70 channels cover the Formula E races. A full list is available on the internet at www.fiaformulae.com.

What expectations is Lucas di Grassi traveling to Formula E’s opening round in Europe with? How has he prepared for the race in the country he calls his second home and what impressions did he gather in the first test of the next-generation Formula E car? The reigning champion will answer these and other questions during an Audi telephone press conference on

After dialing in, please enter access code 86633446 on the keypad of your phone.