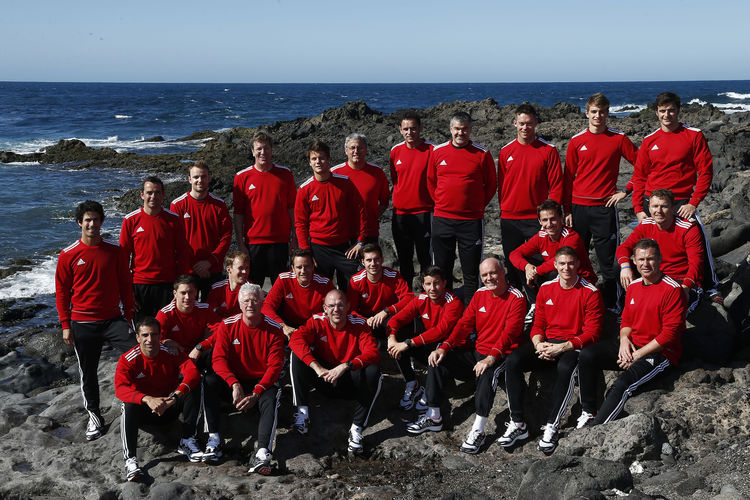 Every year, Audi Sport intensively prepares for the coming motorsport season with its race drivers and team management. This year, the team trained in Lanzarote for the first time.
Download PDF (151 KB)
Facebook
Twitter
LinkedIn
WhatsApp

Every year, Audi Sport intensively prepares for the coming motorsport season with its race drivers and team management. This year, the team trained in Lanzarote for the first time.

Sports, fun and games, plus the necessary serious side: Audi Sport’s teambuilding activity is far more than a fixture on the calendar of the race drivers, team directors and sporting management level. “We’ve been perfecting our joint team week for years,” explains Head of Audi Motorsport Dr. Wolfgang Ullrich. “A healthy mix of individual sports, team disciplines and theoretical units promotes an upbeat mood and the building of a cohesive team. Be it at Le Mans, in the WEC or in the DTM: A lot of the success would simply be impossible without a well-developed team spirit. Only a strong team stands its ground.”

Be it in stretching exercises for the morning warm-up or canoeing, mountain bike touring or beach volleyball, swimming or strength exercises, road biking or stand-up paddling: At temperatures of around 20 degrees centigrade, the Audi drivers proved their fitness and versatility from Tuesday to Saturday, accompanied by sports physician Dr. Christian John. “This year, the drivers again arrived well prepared for our joint week. They presented themselves in the type of physical and mental shape we like them to be in – starting with our 21-year-old newcomer Nico Müller through to our nine-time Le Mans winner Tom Kristensen, who is now 46 years old and in peak form just like his team-mates,” reports Dr. John, who has been Audi Sport’s team doctor for 31 years.

At the end of the week, the factory drivers prepared for future interview situations during a media training unit and demonstrated their professionalism in dealing with journalists as well. MotoGP racers Cal Crutchlow and Andrea Dovizioso, who are under contract with Audi’s subsidiary Ducati, joined them for this training unit that was held on Saturday and Sunday.