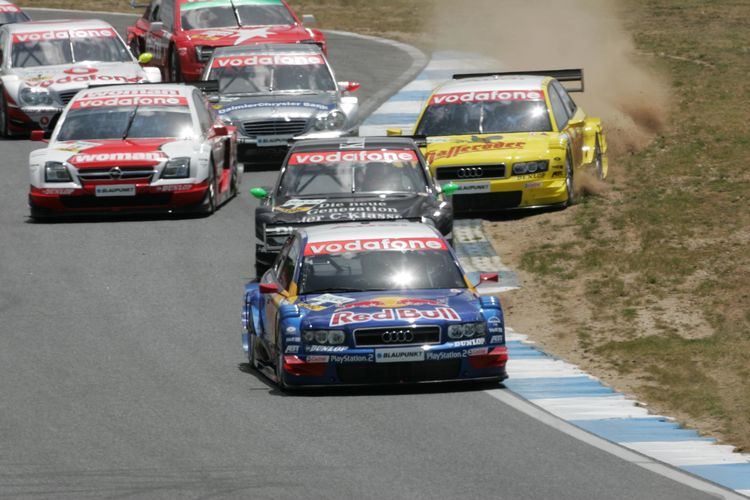 With a strong performance at Estoril (Portugal) Audi have taken the lead in the DTM manufacturers’ standings. In the second race of the new Audi A4 DTM Mattias Ekström, Martin Tomczyk and Tom Kristensen clinched second, third and fourth places respectively. Ekström, who had started from pole position, led the race until the first pit stop, then being held up by a slower competitor. This caused him to drop behind the ultimate winner, whom he followed like a shadow all the way to the finish line. 22-year-old Martin Tomczyk clinched his first podium position at Estoril. Following some communications problems with their pit crews, Christian Abt and Emanuele Pirro finished tenth and eleventh respectively, while Frank Biela finished 15th after a lap-1 collision.

Mattias Ekström (Audi Sport Team Abt / Audi A4 DTM #5)
2nd place (+ 0.652s)
“The Audi A4 was clearly the best car in the field today. That’s why my second place is a bit disappointing for me. I lost my lead due to a slower car, which actually had nothing to do with the battle at the front of the field. But we’re going to prepare ourselves for this type of tactics. After finishing third at Hockenheim and second at Estoril, my goal for the next race at Adria is absolutely clear.“

Martin Tomczyk (Audi Sport Team Abt / Audi A4 DTM #6)
3rd place (+ 3.898s)
“I’m very happy about my first podium position in the DTM. Everything was simply running like clockwork: my A4 was perfect, the two pit stops first class, and I drove a flawless race myself. I hope that this result has been the breakthrough for me to continue the series with equal success.”

Tom Kristensen (Audi Sport Team Abt Sportsline / Audi A4 DTM #12)
4th place (+ 5.101s)
“I had a mega start. Unfortunately, I wasn’t able to benefit from it. I was driving on the outside and my front wheel was touched slightly, forcing me to drive across the grass. My first two sets of tyres didn’t perform all that well, while the last set was perfect, and I was able to catch up with the front of the field. I want to thank my team and Audi: the A4 is a really good car.”

Christian Abt (Audi Sport Team Abt Sportsline / Audi A4 DTM #11)
10th place (+ 46.048s)
“I made no mistakes in the race and a place among the top five would’ve been possible. Unfortunately, I went into the pit lane prematurely, because we had some communications problems. I received a radio message that was obviously not meant for me – we need to investigate why this happened.“

Emanuele Pirro (Audi Sport Infineon Team Joest / Audi A4 DTM #44)
11th place (+ 46.981s)
“I had a good start and things were going well. Unfortunately, there was a misunderstanding between myself and my team before the first pit stop. As a result, I went into the pit lane one lap earlier than I should have and had to drive through the lane. The team definitely deserves better places than the ones we took in the qualifying session and the race at Estoril. On a positive note, aside from all this, my race was very good.“

Hans-Jürgen Abt (Team Director Audi Sport Team Abt Sportsline): “For my team, the result of today’s race is simply smashing: all four drivers are among the top ten, and two of them, Mattias and Martin, even clinched podium positions. I feel sorry for Christian, though. Hadn’t it been for his unfortunate pit stop, he’d surely have been fighting at the front of the field. I’m proud about Abt Sportsline now leading the DTM teams’ standings. That’s a great reward for all the hard work the boys have put in.”

Ralf Jüttner (Technical Director Audi Sport Infineon Team Joest): “Without the misunderstanding between Emanuele and ourselves, which was caused by an extremely poor radio connection, we could have again scored points today. That this didn’t happen hurts, especially since in the race Emanuelle was driving as quickly as the front runners. And, as far as Frank is concerned, we’ll certainly get to where Emanuele was today. Despite this result, we’re definitely seeing a positive trend.”

Dr Wolfgang Ullrich (Head of Audi Motorsport): “It was a thrilling race, which has clearly shown the cohesive strength of the team. We have achieved our primary goal of being able to win races in the DTM. Mattias drove a truly fantastic race and could have won. From my perspective, the crucial situation wasn’t completely ‘clean’, but such incidents do occur from time to time in motorsport, and you simply have to live with them. For me, it’s important that we, ourselves, remain fair. Congratulations also to Martin Tomczyk on his first podium finish in the DTM.“