Audi takes both top spots on grid at Russian premiere 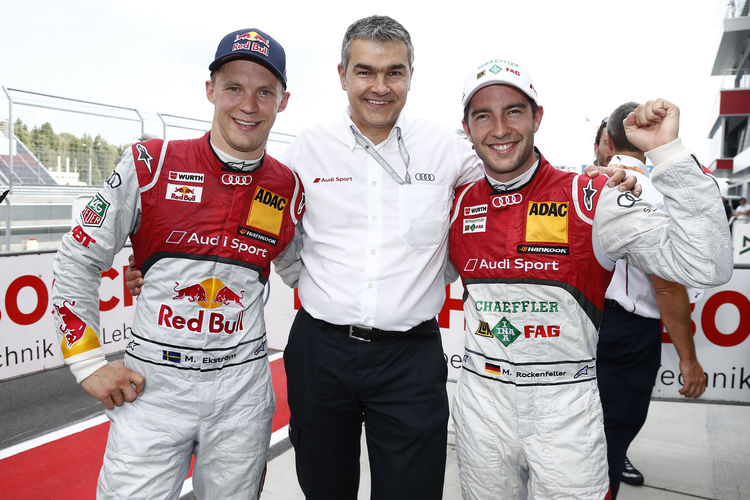 Audi is entering the first Russian race in DTM history with two cars on the front row. At the debut event at Moscow Raceway, Mike Rockenfeller and Mattias Ekström in their two Audi RS 5 DTM cars are starting from the front row (Sunday, from 13:15, CEST live on “Das Erste”).

As a matter of exception, the third section of qualifying on the 2.555-kilometer track of Moscow Raceway was the decisive one. The single timed laps of the top four had to be cancelled on short notice for safety reasons because the rescue helicopter was grounded. By setting the absolutely fastest time of the day (58.423 seconds), Mike Rockenfeller secured the top spot on the grid for the second time this season. For Audi, it was the 70th pole position in total in the DTM.

“Obviously, I’m very pleased to be in first place and starting from the pole position at the DTM’s premiere in Russia,” said Mike Rockenfeller. “My Audi RS 5 DTM was perfect today; Team Phoenix did a fantastic job. My pace was so good today that I’d have been confident to take first place in Q4 as well. We knew that qualifying here is very important but we already worked for the race as well. That’s why I’m hoping that our car will be running well in the race tomorrow too. Let’s see what the weather will do and what other surprises there’ll be in Russia…”

On taking grid position two, Mattias Ekström achieved his best qualifying result of the season so far. The Swede made the leap into the top four for the first time this year. His team-mate Jamie Green in fifth place just barely missed the top four in his Red Bull Audi RS 5 DTM.

“It’s great that at the Russian premiere of the DTM two Audi RS 5 DTM cars are on the front row,” commented Dieter Gass, Head of DTM at Audi Sport. “Our cars were running really well here right from the beginning. Naturally, the end of qualifying was a bit odd, but I think ‘Rocky’ and Mattias (Ekström) would have had very good chances of taking the front row in Q4 as well. Both were fast in all sessions and always running at the very front. With three cars in the top five and seven in the top 14 we’ve got a good overall starting base for tomorrow’s race. And with a view toward the Championship it’s obviously particularly pleasing to see Mike Rockenfeller start from the pole position and thus having the opportunity to extend his lead of the standings.”

The DTM premiere at Moscow Raceway starts at 15:30 local time (13:30 in Germany).  Fans around the world can watch the race live on the DTM’s new YouTube channel at www.youtube.com/dtmint. 39 TV channels in total air live DTM coverage in 141 countries. In Germany, ARD will start to broadcast live from Moscow on “Das Erste” at 13:15.