Skip to content
We are using cookies for a better user experience.
02/24/20
Neuburg a. d. Donau
Sports

{{ activeItem() }}
Twitter
04/09/20
The sporty spearhead of the product line: the #Audi #RS5. Both RS 5 models, Sportback and Coupé, just received an u… https://t.co/auQwOFKvDa
04/09/20
In 1980 we developed the legendary #quattro. 40 years later we electrified it. #quattro40 https://t.co/4nvVFFBrEb
04/08/20
From your living room right into the #Audi center - playing with different configurations has never been easier. Au… https://t.co/FUP5sR7dAR
04/08/20
A signal for #solidarity: Star violinist Lisa Batiashvili &amp; friends will give a concert on April 14 at 8 p.m (CEST)… https://t.co/QJoERW0iUq
Audi on Twitter
{{ activeItem() }}
Facebook
04/09/20
“It’s important for me to keep family close, I’m a family guy.” Away from the track, home for Robin Frijns is in Maastricht, Netherlands. Find out more in our DTM factory driver’s home story: >> audi.com/DTM #PerformanceIsAnAttitude #AudiTogether
04/08/20
New wallpapers: Our Audi RS 5 DTM is coming to your screens with our Audi Sport Teams: Abt Sportsline, Phoenix and Rosberg. >> audi.com/DTM #PerformanceIsAnAttitude #WallpaperWednesday
04/07/20
Travelling down memory lane with Audi Sport customer racing: Scroll though over ten years of race cars, from the original Audi R8 LMS all the way to our current line-up: GT3, GT2, GT4 and TCR. >> audi.com/GT3 >> audi.com/GT2 >> audi.com/GT4 >> audi.com/TCR #PerformanceIsAnAttitude
04/06/20
Nico Mueller recreating the sound of his Audi RS 5 DTM? See that and more in our latest #DriversDiary, as we catch up with him at home in Switzerland. >> audi.com/DTM #PerformanceIsAnAttitude #FourRingsChallenge #AudiTogether
Audi Sport on Facebook 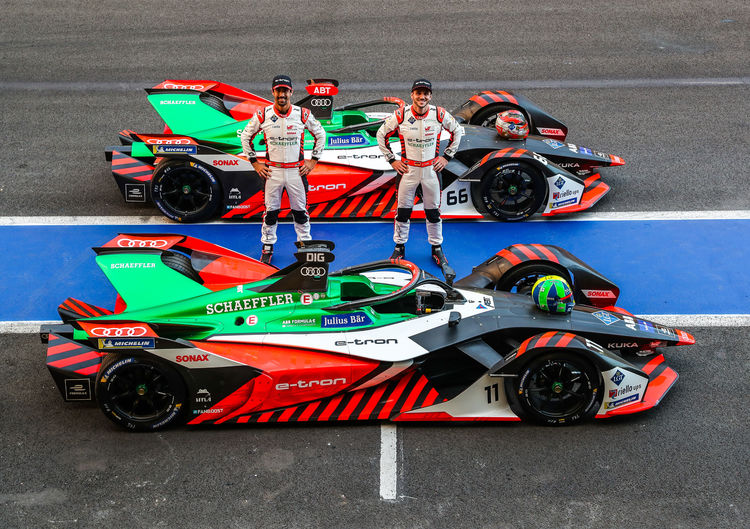 After appearances in the Middle East as well as South and North America, Formula E is now heading to Africa: On Saturday (February 29) Audi Sport ABT Schaeffler will start with its two drivers Daniel Abt and Lucas di Grassi at the fifth round of the purely electric single-seater series in Marrakesh (Morocco).

The most important news first: Daniel Abt is fit again after his accident in Mexico and ready for the next race in his Audi e-tron FE06. The German had crashed into the track barriers in practice after a communication problem of the software in his car and had to be checked in hospital before the race. “The days after the race were pretty tough, so I took a break from everything to recover completely,” says Abt. And now he's back in his old form: “I had really set my sights high for Mexico, which is one of my absolute favourite races – now I'm trying to make up for that at Marrakesh.”

Morocco made its first appearance on the calendar in the third season and was held in parallel with the 22nd United Nations Climate Change Conference in Marrakesh. The circuit at the gates of the fascinating North African metropolis is a mixture of permanent race track and public roads. Last season Audi Sport ABT Schaeffler experienced a difficult weekend. Lucas di Grassi and Daniel Abt qualified for the race outside the top 10. After the start they fought their way through the field and scored points finishing seventh and tenth. Lucas di Grassi had the fastest race lap. Both drivers have so far been denied a podium position in the only Formula E race on the African continent.

“We wanted to attack in Mexico, but after an extremely turbulent day for the whole team we were only able to limit the damage with Lucas’ sixth place. We have put that behind us and are now only focused on the race day in Marrakesh,” says Team Principal Allan McNish. “We have a strong team at home in Neuburg, in the garage at the track and in the cockpit and we know: if we put everything together from the first practice session, we can have both boys on the podium.”

Lucas di Grassi, who was the first Formula E driver to break the 750-point barrier in Mexico, is now fifth in the championship and only 15 points behind the leader of the standings. In the first four races the Brazilian has made up 31 positions on the track. “The championship is still young, we have four different winners so far, nothing has been decided. What’s important is that we score points even if we catch a less than perfect day,” says di Grassi. “My goal for Marrakesh is a better qualifying, despite the difficult first group. With a grid position in the top 10, anything is possible.”

The race in Marrakech starts on Saturday at 4 PM local time and runs as usual over 45 minutes plus one lap. As always, Eurosport will broadcast live. All international channels including the broadcast schedule can be found online at www.fiaformulae.com. Audi provides information from Formula E and from Morocco under the name AudiSport on Twitter, Facebook and Instagram.

In addition to the Audi Sport ABT Schaeffler factory team, the Envision Virgin Racing customer team is also hunting for points with the e-tron FE06 developed by Audi and technology partner Schaeffler. Sam Bird and Robin Frijns are in seventh place in the team classification after the first four races.

The day after the race, a Formula E rookie test will be held at the Marrakesh circuit. For Audi Sport ABT Schaeffler, the South African Kelvin van der Linde and Mattia Drudi from Italy will sit in the cockpits of the two Audi e-tron FE06.