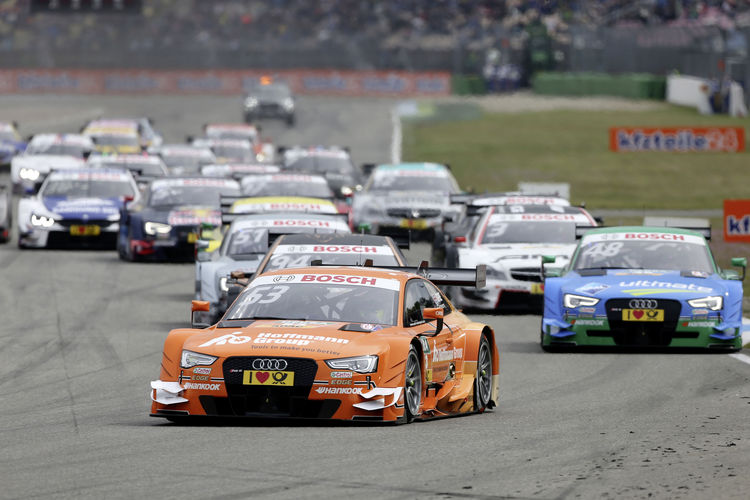 A brilliant season opener for Audi in the DTM: In the opening round at Hockenheim, Jamie Green (Audi Sport Team Rosberg) took a commanding victory after starting from the pole position. With four Audi RS 5 DTM cars in the top six, Audi left the strongest overall impression as well.

Jamie Green and his orange Hoffmann Group Audi RS 5 DTM were in a class of their own on Saturday. With a 0.116-second advantage, the Briton secured the pole position and set the pace across the 26 laps in the first of the weekend’s two races. Following a perfect start, he quickly pulled clear of his immediate rivals and would not lose his cool even when the safety car was deployed twice, which foiled his advantage in each of the two caution periods.

“I was fast even last year but was simply unfortunate in the races,” Green said following his first victory for Audi. “Today, everything went perfectly. I’m driving in the same team, have the same engineer and feel comfortable in my Audi RS 5 DTM. All I can say is I’m happy.”

In an action-packed first race in which the spectators saw thrilling duels, collisions and many overtaking maneuvers, only 16 of the 24 cars that had started saw the checkered flag. Mattias Ekström (Red Bull Audi RS 5 DTM) finished the race in twelfth place despite having suffered a puncture in contact with another car that forced him to make an unscheduled pit stop. Adrien Tambay (Playboy Audi RS 5 DTM) lost possible points as well due to tussles and an off-track excursion into the gravel trap. The Frenchman finished in 15th place.

For Timo Scheider (AUTO TEST Audi RS 5 DTM) and Miguel Molina (Teufel Audi RS 5 DTM) the race ended early. Both were entangled in collisions in the commotion of the starting lap and were forced to subsequently park their cars in the pits.

“I’m very happy about the successful season opener,” said Dieter Gass, Head of DTM at Audi Sport. “We delivered a very thrilling DTM race to the crowd which proves that the new race format is a step in the right direction. Obviously from Audi’s perspective it’s even more important that we’ve been able to make an initial assessment of where everyone stands and have seen that we did good work last winter. The Audi RS 5 DTM was the strongest car today and Jamie Green did the most impressive job of putting this on track. In the second half of the 2014 season he was already very fast. His first victory for Audi was practically in the air and simply overdue.”

Today, however, will not be a day for excessive partying at Hockenheim as the second race of the 2015 DTM is scheduled for Sunday, preceded by a warm-up and another qualifying session. ARD will start to air live coverage of the race two at 13.20 (local time).