{{ activeItem() }}
Twitter
09/28/20
Our innovative research project on bidirectional charging with the Hager Group incorporates electric cars into peop… https://t.co/eONYRc0FgG
09/28/20
The #future is #electric. August was a good month for electric and plug-in hybrid vehicles in the top 5 markets in… https://t.co/9fQUOZd5mQ
09/28/20
Congratulations, @FIAFormulaE! This achievement is another important step on our common path to the… https://t.co/HCGXlPt3QZ
09/26/20
When alternative is your first choice. #Audi #etronSportback https://t.co/a7n4YD9SLz
Audi on Twitter
YouTube
09/22/20 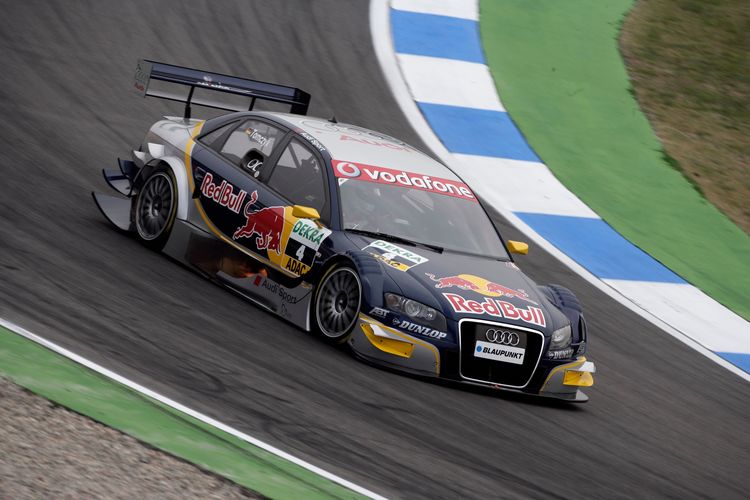 By setting two best times, Audi started to the eagerly awaited DTM finale at Hockenheim. In both tests on Friday, an Audi driver was running in front. In the morning, Martin Tomczyk in the Red Bull Audi A4 DTM of Audi Sport Team Abt Sportsline set the day’s best time (1m 33.825s). The candidate for the title from Rosenheim (Bavaria) beat the current qualifying record by more than half a second.

In the afternoon, as well, the 25-year-old climbed out of his Audi in extremely good spirits: in the second test, Tomczyk by far managed the best race simulation (‘long- run’) of all 20 drivers. This means that the third-placed in the standings, who won two of the last three DTM races, is well set for Saturday’s qualifying as well as for the race on Sunday.

That the Audi A4 DTM cars of the 2005 and 2006 model years have chances to score good results as well was proved by Mike Rockenfeller (Audi Sport Team Rosberg) and Markus Winkelhock (Futurecom TME): “Rocky” in last year’s A4 was the quickest in the afternoon. The Swabian set the third-best time in the first test. Altogether, the first test saw five and the second seven Audi A4 DTM cars make it into the top ten – including the leader of the standings Mattias Ekström (Sweden), who clocked the fifth-best time in the afternoon.

How strong the contenders truly are, however, will only become evident in the qualifying practice on Saturday (starting at 1:28 p.m. local time), which – like the race on Sunday – will be broadcast live on “Das Erste” by ARD.

Trackside interest is greater than ever: As early as on Friday, numerous fans started hunting autographs. For race day, more than 65,000 tickets were sold – a DTM record.

Dr Wolfgang Ullrich (Head of Audi Motorsport): “Although Friday isn’t a very conclusive day, it’s been a good start for us. Despite the low temperatures the track had pretty good grip and we achieved some very good results. In addition, Martin (Tomczyk) managed an outstanding long run in the second test. What counts now is that we apply what we learned on the track tomorrow.”

Martin Tomczyk (Red Bull Audi A4 DTM #4)
1st place / 4th place, 1m 33.825s
“Finally, a Friday that was perfect in every respect. Straight from the first lap everything fit. It feels good to know that we’ve already worked out a very good race set-up that only needs to be changed in terms of a few minor details. Now I can go to bed and get a good night’s sleep before we concentrate tomorrow morning on preparing ourselves perfectly for qualifying.”

Mike Rockenfeller (S line Audi A4 DTM #11)
8th place / 1st place, 1m 33.860s
“Of course being all the way up front is great – as a racer that’s where you’d always like to be! I’m very satisfied. The car was running perfectly, straight from the start. We got through our programme very well. Now we need to see whether this will be enough for us to clinch front positions on Saturday as well. I believe that we achieved the maximum with our car today. But this doesn’t earn us any points yet.”

Timo Scheider (Gebrauchtwagen:plus/Top Service Audi A4 DTM #8)
7th place / 2nd place, 1m 33.909s
“We did a lot of basic work again today. This afternoon, things were going really great, I was among the front runners, in second place. I’m quite satisfied already with the balance of my A4, but I’m still lacking a bit of top speed on the straight. But I’m optimistic that my boys will find out the reason for this.“

Mattias Ekström (Red Bull Audi A4 DTM #3)
13th place / 5th place, 1m 34.214s
“On the satisfaction scale this was a fair to middling Friday for me. Today we started with the set-up we used in the season opener and then gradually fed in all the experience we gained throughout the season – and that’s been quite a bit. My A4 is already 99 percent perfect – a little more fine-tuning for the long run and we’ll be sorted for the weekend.”

Alexandre Prémat (Audi Bank Audi A4 DTM #17)
16th place / 7th place, 1m 34.371s
“This wasn’t an easy day. Hockenheim is a difficult track. We need to make a few more changes to the car in order to have a chance to perhaps make it into the third qualifying section. The car’s handling is still too difficult. But I’m not disappointed because we collected a lot of valuable data. I hope Saturday will be better. We’ll do our best to ensure that.”

Markus Winkelhock (Audi A4 DTM #20)
3rd place / 8th place, 1m 34.337s
“At the Nürburgring I had a bout of gastrointestinal flue, and at Barcelona I was still feeling poorly. I’m glad now to be feeling comfortable in the car again. Basically, I get along fine with the Hockenheim circuit. In the first test I was third, but that has to be assessed realistically. In the second test I was in eighth place: We’re pretty well sorted. This time I’m clearly feeling the effect of new tyres, as opposed to Barcelona and the Nürburgring where this hardly wasn’t the case at the end.”

Tom Kristensen (Siemens Audi A4 DTM #7)
5th place / 10th place, 1m 34.478s
“It’s great to be back at Hockenheim. It’s a special place for me at which I had my serious accident at the beginning of the season. Even after several months I’m still feeling some slight effects of the crash – but they won’t keep me from giving all I’ve got to finish the DTM year the way it should have started: with a strong race and a top result.”

Lucas Luhr (Philips Audi A4 DTM #12)
19th place / 16th place, 1m 34.688s
“The day did not go well for me at all. Unfortunately, my car has way too much understeer. With the set-up something definitely went into the wrong direction. We need to resolve this now.”

Christian Abt (Playboy Audi A4 DTM #16)
12th place / 19th place, 1m34.777s
“We completed our programme whilst saving tyres in order to have new sets of tyres available on Saturday. We’ll cross off the Friday now. I’m eager to see the effects this will have on Saturday across the free practice and qualifying sessions.”

Vanina Ickx (Audi A4 DTM #21)
20th place / 20th place, 1m 35.851s
“There was nothing special today. The track was dry, conditions were good. Grip was surprisingly good. From the morning to the afternoon I improved by half a second. That’s okay but not enough.”

Hans-Jürgen Abt (Team Director Audi Sport Team Abt Sportsline): “I’m positively surprised: Despite the grand finale everyone is very relaxed and doing their job as professionally as always. We achieved a good result today because the long runs show us that our Audi A4 DTM has the speed that’s needed to be all the way at the front of the field here again. I’m more than satisfied with this Friday and now wish that we’ll secure a good starting base for the big showdown on Sunday based on this energy.”

Ernst Moser (Team Director Audi Sport Team Phoenix): “Both cars had balance problems and the drivers were complaining about heavy understeer. We have not managed to come up with optimum set-ups yet. We need to analyse the data and integrate the right things for Saturday, because there’s still a lot of work ahead of us.”

Arno Zensen (Team Director Audi Sport Team Rosberg): “For ‘Rocky’, we found a good set-up for qualifying, while for the race we still need to do some work. Normally, it was the other way around with us. With Lucas’s (Luhr) car I’m not satisfied at all. We need to take a closer look at that.”