Links
{{ activeItem() }}
Twitter
04/20/21
.@Aust_Motorsport will be returning to the 2021 ADAC @gtmasters with an Audi R8 LMS shared by Sebastian Asch and Da… https://t.co/PqpmEsZSh3
04/20/21
Yaco Racing will enter an Audi R8 LMS in the 2021 @gtmasters season. The #54 entry will be shared by Simon Reicher… https://t.co/Y8hOYlXwtk
04/20/21
Behind the scenes in the Audi Sport ABT Schaeffler Formula E garage. Team Principal @allanmcnish takes us for a tou… https://t.co/QzWDcEGZIs
04/20/21
“Valencia is an unusual @FIAFormulaE circuit: Quick, flowing, almost no tight corners and has lots of run-off.” –… https://t.co/y0ow7JDA6o
Audi Sport on Twitter
{{ activeItem() }}
Facebook
04/20/21
Behind the scenes in the Audi Sport ABT Schaeffler ABB Formula E garage. Team Principal Allan McNish takes us for a tour. The Valencia E-Prix takes place this week on April 24 and 25. >> audi.com/FormulaE #FutureIsAnAttitude #ValenciaEPrix
04/19/21
Well done to our customers for their success with all four models from Audi Sport customer racing this past weekend – highlighted by the race victories for the Audi R8 LMS GT2 at Monza. 🇮🇹 🇩🇪 🇭🇺 🇨🇳 >> audi.com/GT2 >> audi.com/GT3 >> audi.com/GT4 >> audi.com/TCR #PerformanceIsAnAttitude
04/19/21
Race week: 🇪🇸 ABB Formula E Valencia E-Prix double-header on April 24 and 25. >> audi.com/FormulaE #FutureIsAnAttitude #ValenciaEPrix
04/11/21
Not our day in Rome. Both Lucas Di Grassi and René Rast ended the race in the wall, Lucas through no fault of his own and an uncharacteristic error from René. We’ll repair the cars and come back stronger at Valencia in two weeks’ time. >> audi.com/FormulaE #FutureIsAnAttitude #RomeEPrix
Audi Sport on Facebook 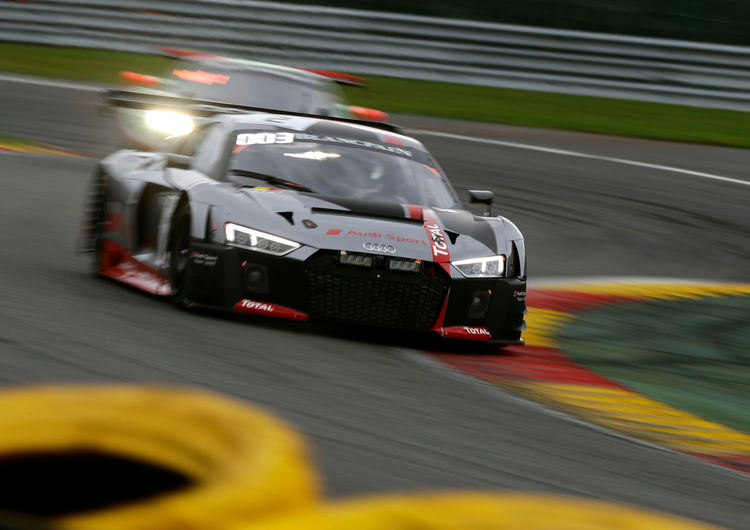 In the battle for its fourth overall victory in the 24 Hours of Spa on July 29 and 30, Audi Sport has achieved a good starting base. Audi Sport Team WRT secured the third-best grid position in a fiercely fought competition on the 7.004-kilometer roller coaster in the Ardennes.

Frédéric Vervisch in the super pole qualifying was the best Audi driver in the GT3 racing season’s pinnacle event. The 30-year-old Belgian drove the #2 Audi R8 LMS around the Ardennes circuit in 2m 17.630s, just 24 hundredths of a second off setting the best time. The second-fastest Audi driver was René Rast in the sister car from Audi Sport Team WRT. In the battle for the best grid positions, the German achieved sixth place. Austrian Clemens Schmid in the privately entered car of Team I.S.R. took position nine. As a result, Audi is the only manufacturer to have qualified in the top ten with more than one race car. No less than eight marques managed the leap into this group which is separated by only 0.774 seconds. Kelvin van der Linde (Audi Sport Team I.S.R.) in position twelve, Jamie Green (Belgian Audi Club Team WRT) in position 18 and Christopher Haase (Audi Sport Team Saintéloc) complete Audi’s line-up on the first ten rows.

“We’re facing one of the most thrilling editions of the 24 Hours of Spa,” says Chris Reinke, Head of Audi Sport customer racing. “The gaps were already extremely small in all the practice sessions on Thursday. The performances delivered by the ten marques in the final qualifying were very balanced. So, in that respect, we’re completely happy with grid position three and the other results. The drivers and teams are well prepared for the race because we’ve completed all our programs jointly in every respect.”

Thursday’s qualifying had already showed how close the competition was with 36 cars having qualified within one second of each other. The 20 fastest of them were within just 0.464 seconds and advanced into the super pole qualifying.