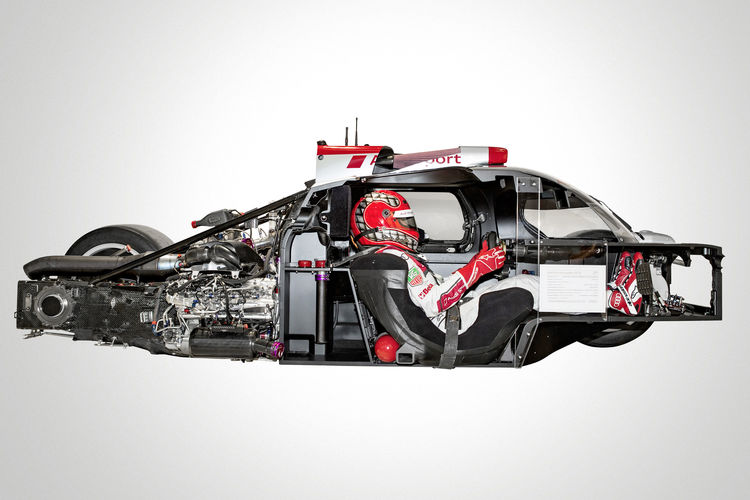 As the central chassis component, the monocoque supports the front axle, the front and lateral body parts and, since 2012, the hybrid system. The engine is directly connected to the rear.
Download PDF (165 KB)
Facebook
Twitter
LinkedIn
WhatsApp

Four more weeks until the Le Mans 24 Hours celebrates its 90th anniversary. Audi has set standards with its ultra-lightweight design in the area of the sports prototypes. In 15 years of development, the motorsport engineers have achieved best marks.

“In the space of 15 years, we’ve also achieved major progress in the area of ultra-lightweight design,” stresses Head of Audi Motorsport Dr. Wolfgang Ullrich. “Audi’s LMP sports cars have continually become lighter, stiffer, safer in crashes and more efficient. There is hardly another motorsport discipline in which the creativity of the engineers is rewarded as highly as it is with the Le Mans prototypes. Whether in terms of engineering design details or materials: many of the ultra-lightweight ideas from motorsport have the potential of positively influencing the development of Audi’s production models. Reducing the weight of the cars is the key to our successful future – in motorsport and in production.”

Even in its first LMP sports car – the 1999 R8R – Audi used a carbon fiber monocoque. Audi has significantly been reducing weight to this day:

-As the central chassis component, the monocoque supports the front axle, the front and lateral body parts and, since 2012, the hybrid system. The engine is directly connected to the rear. The monocoque thus transmits the torsional and bending forces which are introduced through the wheel suspensions, and absorbs the impact energies that are generated in accidents – in frontal or side crashes as well as in roll-overs.

-Although a closed cockpit requires the use of more material Audi has managed to cut the weight of the monocoque in half between 1999 and today, while surpassing all the safety and crash requirements of the FIA. Furthermore, Audi managed to again increase the torsional strength of the monocoque during this period of time despite the 50-percent reduction in weight. The comparison with a production car reveals interesting facts: with comparable torsional values, the weight of the carbon cell of the R18 only amounts to about a fourth of the weight of a body-in-white made of steel sheet.

-The torsional and bending stiffness of the cockpit can only be completely effective if the fully stressed assemblies of the engine and transmission provide the corresponding stiffness. The V6 TDI engine with a 120-degree cylinder bank angle is based on an innovative architecture of the crankcase: Underneath the main bearing, the crankcase is of a ladder frame design. The lateral suction port of the dry sump and the finning connect the bearing blocks with each other. In combination with the upper crankcase deck, this creates a stiff unit. The engine and the monocoque have nearly the same stiffness. This chassis design is complemented by the transmission housing. Since 2012, it has been made of a lightweight and stable full-carbon construction in which the mounting points for the rear axle are integrated. In addition, very light backstays from the monocoque to the transmission housing optimize the stiffness of the rear end.

-A chronological comparison illustrates the significance of the progress that has been made in ultra-lightweight design: The weight of a diesel engine, due to its design, exceeds that of a comparable gasoline engine in the two-digit percentage range. At the same time, the Audi R18 e-tron quattro, since 2012, has been accommodating a hybrid system including a motor at the front axle. Still, the basic weight of the race car is below the minimum of 915 kilograms. Ballast weight is used to improve the set-up. The 1999 R8R, with a gasoline engine and without a hybrid system, weighed almost exactly 900 kilograms and hardly offered any latitude for ballast.

-Numerous smaller solutions have been accompanying the major steps. The carbon fiber gas pedal in the Audi R10 TDI already saved a few hundred grams of weight compared with an aluminum version. The lithium-ion battery that was used for the first time in the 2009 R15 TDI even proved to be seven kilograms lighter than a lead storage battery.