Skip to content
We are using cookies for a better user experience.
08/25/19
Suzuka/Neuburg a. d. Donau
Sport 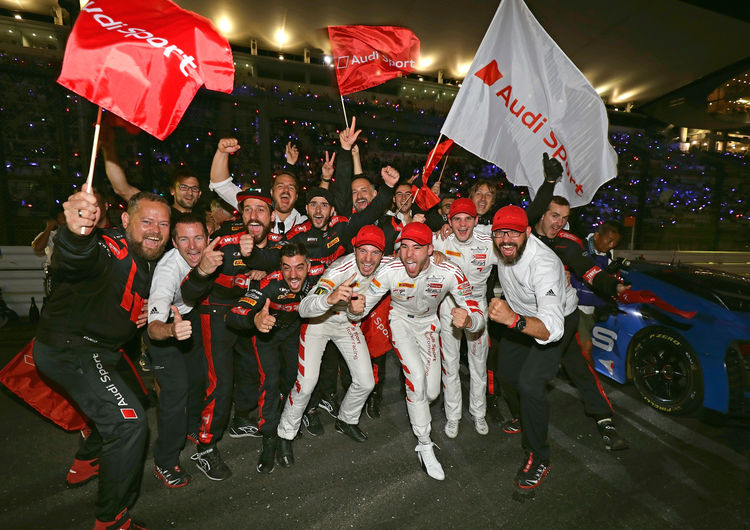 Jubilation in Japan: Kelvin van der Linde/Dries Vanthoor/Frédéric Vervisch celebrated victory in the 10 Hours of Suzuka, which makes for high suspense in the title race of the world’s only GT3 racing series before the finale in November. Frédéric Vervisch, in third position, is now only six points off the top spot. Christopher Haase/Christopher Mies/Markus Winkelhock were running in second position until the last hour of racing before dropping back to seventh due to a delayed refueling stop.

“By clinching victory in Japan, Audi Sport Team WRT as well as the drivers delivered an impeccable performance in this crucial phase of the championship,” says Chris Reinke, Head of Audi Sport customer racing. “As a result, following a difficult start to the season, we put ourselves in the best possible position.” In the early phase, the number 25 nogaro blue Audi R8 LMS, whose color and number are reminiscent of Audi’s first RS model 25 years ago, held its ground in third position. While several strong rivals lost their chances early due to accidents and penalties, Audi Sport Team WRT avoided making any mistakes. Strong lap times by all three drivers and tactically clever moves, for instance during caution periods, meant that the Audi that had started from second position was permanently leading from the third hour of racing on.

Audi Sport Team Absolute Racing with car number 125 established itself in the group of the front runners in the second half of the race, too. Consequently, the Germans Christopher Haase, Christopher Mies and Markus Winkelhock, who had started from seventh position, on the challenging Grand Prix circuit in Japan improved once more compared with the qualifying sessions. Up until the tenth hour of the race, they were running in second before refueling during the last pit stop took too long and caused the team to drop to seventh position. As a result, three different brands and four different driver teams have won the first four rounds of the Intercontinental GT Challenge. A third team celebrated a finish after ten tough hours of racing as well: the local Audi Team Hitotsuyama with Alessio Picariello, Richard Lyons and Ryuichiro Tomita, following an early drive-through penalty and a slow puncture, crossed the finish line in 17th position.

The fourth racing event of the Audi Sport R8 LMS Cup held as part of the supporting program, in which the best in the standings have moved closer together before the finale as well, and launches of RS models by Audi Japan on the local market rounded out the impressive appearance by Audi Sport customer racing in front of 51,000 enthusiastic spectators in Japan.

Now the worldwide endurance racing fans can look forward to a thrilling title decision. For the first time, the Intercontinental GT Challenge will visit Africa this year. The 9-hour race at the circuit of Kyalami on November 23 will decide if Audi, after two victories in the drivers’ and three in the manufacturers’ classifications since 2016, will be able to claim its sixth title in this racing series.