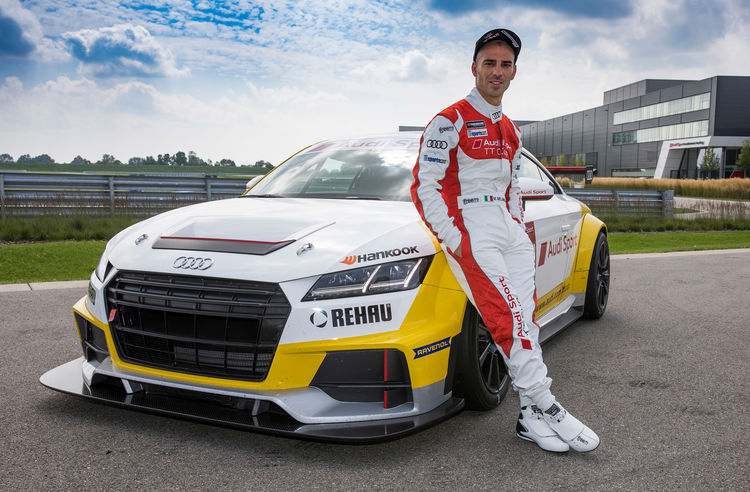 The spectators of the Audi Sport TT Cup at the Nürburgring can look forward to three well-known guest drivers, including two world champions from other disciplines.

From world champions to a YouTube star: Three prominent guests will enrich the grid at the fifth round of the 2017 Audi Sport TT Cup. Aviation stunt pilot Matthias Dolderer, motorcycle world champion Marco Melandri and online video producer Felix von der Laden will all compete at the Nürburgring from September 8 to 10. Dolderer first flew alone at the age of 14, won the German Ultralight Flying Championship at 20 and last year clinched the title in the Red Bull Air Race World Championship. Marco Melandri was the youngest motorcycle world champion of all time in the 250-cc class in 2002, and has taken 20 victories in the Superbike World Championship to date, in which he currently competes for the Aruba.it-Racing Ducati team. The 23-year-old Felix von der Laden has more than three million subscribers to his YouTube channel. The car lover’s first preview video report of the Audi Sport TT Cup already has more than 450,000 views.

Victory for Audi customer team in Hungary: The fourth race weekend of the Blancpain GT Series Sprint Cup in Hungary was a complete success for Marcel Fässler and Dries Vanthoor. The Swiss-Belgian driver duo won the qualifying race and the main race at the Hungaroring in an Audi R8 LMS from Belgian Audi Club Team WRT. The second victory of the season was not the only thing to celebrate for team principal Vincent Vosse: the Dutch-British combination of Pieter Schothorst/Jake Dennis reached third in the qualifying round and went on to take second in the race just 0.570 seconds behind the winners. Belgian Audi Club Team WRT has now taken the lead of the team rankings for the first time this year with a 13-point advantage before the season finale at the Nürburgring in three weeks’ time. Fässler/Vanthoor have climbed from eighth to third place on the drivers’ rankings and now sit just four points off the top of the table.

Podium in Le Castellet: The Optimum Motorsport team took its third podium result of the season in the GT3 class of the Le Mans Cup. The British driver combination of Flick Haigh/Joe Osborne finished third in an Audi R8 LMS at Le Castellet in southern France. The team and the drivers now both occupy third in each ranking with two rounds remaining.

Rookie title for Audi customer: The Audi customer racing team Car Collection Motorsport celebrated a title win in the 24H Endurance Series. After 24 race hours, Max Edelhoff, together with his teammates, reached third place in the A6 Amateur class in an Audi R8 LMS at the season finale in Portimão, winning the title for the best junior driver.

Two victories in TCR China: Chu Han Huang won two races of the TCR China. The Chinese prevailed in Shanghai in an Audi RS 3 LMS from the New Faster team in the third round. Teammate Andy Yan completed a New Faster 1-2 victory in the first race with second place, whilst also finishing third in the second race.