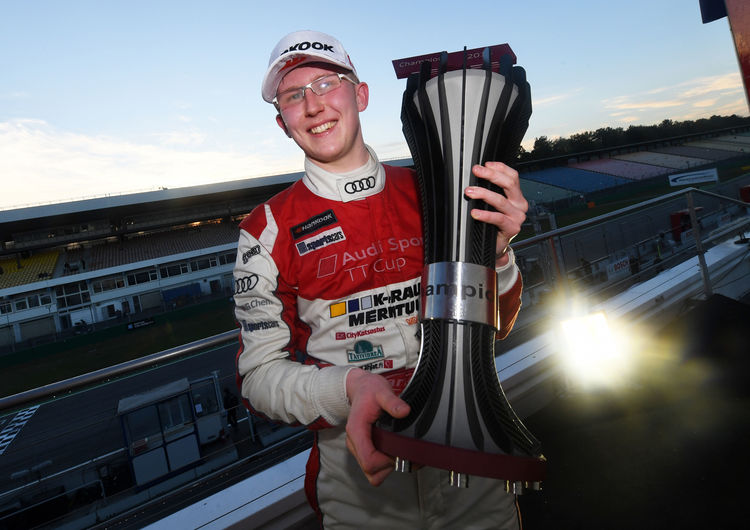 Joonas Lappalainen secured the title in the Audi Sport TT Cup season finale at the Hockenheimring. In the last race, the Finn, who is only 18 years old, came in third place, trailing Dennis Marschall and Nicklas Nielsen, and relegated the German Marschall and Nielsen from Denmark to positions two and three in the overall classification. Still, Nielsen had good reason to celebrate, too. The newcomer in the Audi one-make cup, on achieving two second places, claimed victory in the rookies’ classification.

Joonas Lappalainen celebrated the greatest success in his still young career with Finnish composure. Mellow Lappalainen drove to win the title. The Finn, who in 2015 claimed fourth place overall, was one of only three drivers this season to see the checkered flag in each event, mounting the podium eleven times in 14 races and deciding four of them in his favor. As the overall winner, the 18-year-old will receive a promotion and support in the customer sport program of Audi Sport customer racing worth 150,000 euros.

“In Joonas Lappalainen, the 2016 Audi Sport TT Cup has a deserving champion,” says Project Leader Philipp Mondelaers. “He showed consistently strong performances throughout the season and made no mistakes. Still, it was a balanced battle through to the last race, as we had an even stronger field of drivers this year than in our inaugural season of 2015.” This is underlined by the fact that four drivers still had title chances before the season finale – even including two rookies, Nicklas Nielsen and Sheldon van der Linde.

So, it was between Nielsen and van der Linde that the thrilling duel for the title in the juniors’ classification ensued at the Hockenheimring. In the end, the Dane Nielsen had the stronger nerves. The 19-year-old came in second place twice, bumping the South African van der Linde from the top spot of the rookies’ ranking. “Our talents with an average age of just over 21 years delivered 14 tremendous races, proving that they’re destined for greater things,” says Chris Reinke, Head of Audi Sport customer racing. “The Audi Sport TT Cup is the perfect way to enter the motorsport world at Audi.”

While the 2016 season ended at the Hockenheimring as part of the DTM’s supporting program, the search for international talents for the coming season is in full swing. 78 young talents from 17 countries have applied for the 2017 Audi Sport TT Cup to date. The registration form for the Audi one-make cup is available online: http://www.audi-motorsport.com/de/en/tt-cup.html