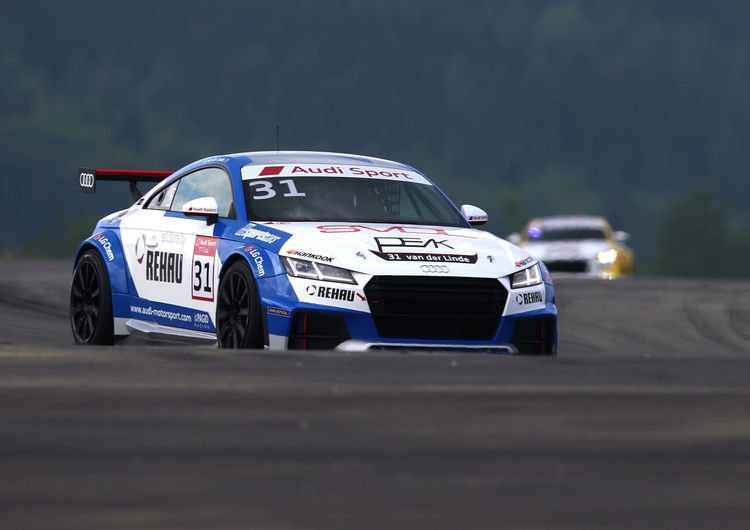 Following its visit to the 24-hour race at the Nürburgring, the Audi Sport TT Cup is back on familiar ground. As part of the DTM’s supporting program one race each on Saturday, June 25 and on Sunday, June 26, will be held in the Audi one-make cup at the Norisring.

The race weekend at the challenging city street circuit in Nuremberg has special significance for the organizational team of the Audi Sport TT Cup. It is the home round for the brand with the four rings and promises to deliver gripping motorsport again. “Last year, the spectators saw two thrilling races with many fantastic duels,” says Project Leader Philipp Mondelaers. “Only the rain on Saturday put a slight damper on the mood. Hopefully, the whole weekend will be dry this year.”

With three victories in four races the South African Sheldon van der Linde is the dominant campaigner at the moment. Two drivers are lurking behind the 17-year-old overall leader: Dennis Marschall, who finished last season in third place, and Joonas Lappalainen from Finland. Having clinched podium places at Hocken­heim and at the Nürburgring, both drivers have demonstrated their ambitions for the title. Now, they are set on taking advantage of their experience from the Audi Sport TT Cup’s inaugural season on the 2.3-kilometer high-speed track. “The Norisring is a great circuit requiring a lot of discipline. As there are practically no run-off areas the track commands high concentration of the field,” says Chris Reinke, Head of Audi Sport customer racing.

In the guest entrants’ classification, Bundesliga coach Michael Henke will be battling for victory. The 59-year-old’s career includes stints as assistant coach of Borussia Dortmund and FC Bayern München. Since 2013, Henke has been active in this role at FC Ingolstadt.

Events at the Norisring will kick off on Friday, June 24, with free practice at 15:50. The 30-minute qualifying session will start on Saturday, June 25, at 8:30, followed by the first race at 16:20. Race two will be held on Sunday at 15:00. Both races will be streamed live at www.audimedia.tv. Free TV channel SPORT1 will be airing full-length coverage of the rounds on Saturday starting at 19:15 and on Sunday starting at 18:30.

While the third in a total of seven race weekends is coming up in the 2016 Audi Sport TT Cup, the search for talents for the coming season is already under way. The application form for participation in the 2017 Audi one-make cup is available online at www.audi-motorsport.com/de/en/tt-cup.html.