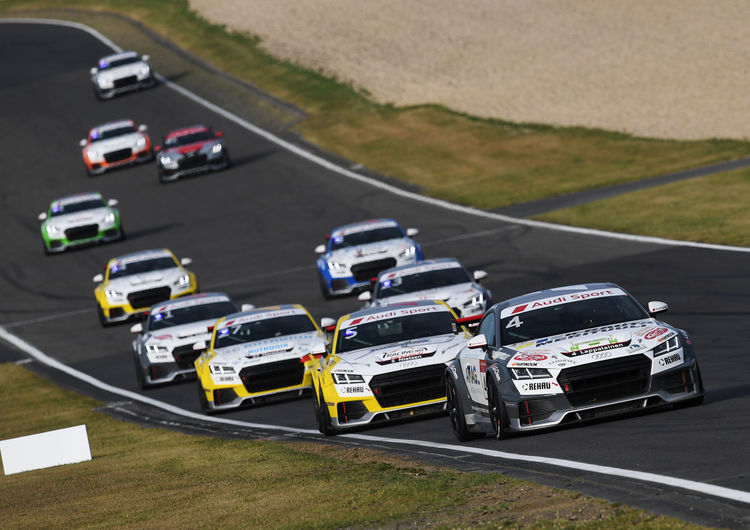 The question of who is going to win the title in the Audi Sport TT Cup may already be decided at the Hungaroring. On the sixth of seven race weekends, two stars from the FIM Superbike World Championship (WorldSBK), Chaz Davies and Xavier Forés, will be on the grid as guest entrants. The races in the Audi one-make cup will be held as part of the DTM supporting program on Saturday, September 24, and on Sunday, September 25.

The 2016 Audi Sport TT Cup is on the finish straight. On the penultimate race weekend of the season, Joonas Lappalainen may claim the new champion’s title early. Following his two victories at the Nürburgring, the 18-year-old Finn has 197 points, giving him a 17-point advantage over the runner-up, Dennis Marschall (D/180). Nicklas Nielsen (DK) and Sheldon van der Linde (ZA), with 166 and 163 points respectively, still have realistic chances of succeeding Jan Kisiel as well. The Pole crowned himself in the Audi Sport TT Cup last year.

Project Leader Philipp Mondelaers looks forward to the premiere in Hungary: “This race weekend is a very special one for us. After Zandvoort, Budapest is our second foreign visit this season. The Hungaroring is a very challenging track which our young talents don’t know yet. The battle in the overall classification is extremely thrilling and I look forward to two tremendous races with a large crowd in the open-air grandstands, especially as our plant in Győr, where the Audi TT is produced, is just barely a two hour’s drive away.”

In the guest entrants’ classification, two stars from motorcycle racing will be pitted against each other at the Hungaroring. Chaz Davies (GB) and Xavi Forés (E) are currently riding the Ducati 1199 Panigale R in the Superbike World Championship. Davies became Supersport World Champion in 2011 and subsequently switched to the WorldSBK. There the 29-year-old Welshman has celebrated 13 victories to date and is currently ranking in third place. 30-year-old Forés was European Superstock 1000 Champion in 2013 and winner of the 2014 IDM Superbike Championship. “In the past, a number of motorcycle racers proved that they’re fast on four wheels as well,” says Chris Reinke, Head of Audi Sport customer racing. “I’m sure they’re going to deliver a fantastic show and fight a fair battle against our permanent entrants.”

The race weekend at the Hungaroring will start with free practice at 14:35 on Friday, September 23. Qualifying will start at 11:30 on Saturday, followed by the first 30-minute race at 16:20. On Sunday, at 11:45, round two across the same distance will conclude the weekend.

Both races will be broadcast by live streaming at www.audimedia.tv on the web and via the “Audi Media TV” SmartTV-App. This allows viewers around the globe to watch the Audi Sport TT Cup live on television via Samsung, LG, Amazon Fire and Android TV. SPORT1 will provide live coverage of round one on Saturday starting at 16:00 (CEST) on free-to-air TV. Delayed coverage of race two will begin on Sunday at 16:00.

While the title race in the 2016 Audi Sport TT Cup is entering the crucial stage the talent search for the next season has already begun. The application form for the 2017 Audi one-make cup is available online: www.audi-motorsport.com/de/en/tt-cup.html