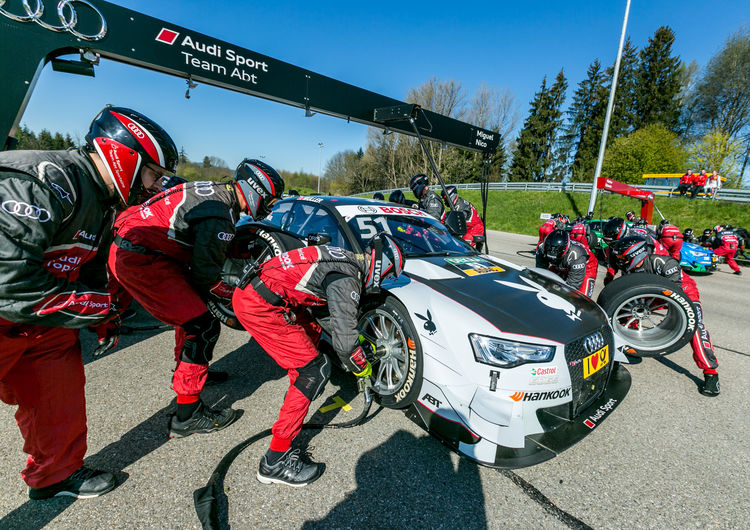 Audi Sport did its homework. The eight Audi drivers are in perfect shape. And the Audi Sport teams are ready for the new DTM season that begins at Hockenheim this weekend as well.

When the race trucks of the teams start heading for Hockenheim this Wednesday, the Audi Sport teams, Abt Sportsline, Phoenix and Rosberg, are looking back on some intensive weeks. Following the DTM pre-season tests at the beginning of April, all eight Audi RS 5 DTM cars were completely dismantled once more. Every part was checked before the race cars consisting of some 4,000 single parts were assembled again and fitted with the race engines for the 2016 season.

ABT Sportsline has been active for Audi Sport in the DTM since 2004. Phoenix and Rosberg have been competing in the popular touring car series for the four rings since 2006 and thus for more than ten years as well. Still, all three teams have optimized their processes for a DTM weekend once more last winter, analyzed data for hours on end, and invested in their technical equipment.

“In the DTM, even the smallest details matter,” says Hans-Jürgen Abt, Team Director of Audi Sport Team Abt Sportsline. “We optimally prepared and are all fired up to clinch another DTM title for Audi – it would be our sixth one.”

ABT is the DTM master of quick pit stops, and for good reason. The choreography of the tire change which, ideally, takes less than three seconds and involves 13 mechanics is practiced in Kempten several times a week. Before the first race weekend, the squad practiced nearly 800 pit stops and spent many hours in the outfit’s own gym.

Anyone having to lift a DTM wheel weighing some 20 kilograms or control a power wrench at a speed of 18,000 revolutions per minute to loosen the wheel nut with a force of 2,000 newton meters has to be in top physical shape. That’s why Audi Sport Team Rosberg has its own gym at which a fitness coach trains the mechanics twice a week. The team from Neustadt an der Weinstraße is proud of a DYI pit stop simulator based on a Piaggio van sporting the look of the Audi RS 5 DTM and nicknamed “Marianne.”

“We enlarged our engineering office last winter,” says Arno Zensen, Team Director of Audi Sport Team Rosberg. “By hiring new employees, we received new impulses and have optimized our work and quality processes. Plus, we purchased new equipment that makes even more precise measurements possible and saves time – this is particularly important in view of the DTM’s current format.”

The people at Phoenix Racing in Meuspath looked for optimization potential in winter as well. The result is a leaner structure with shorter decision-making processes. “We’re in a better position than we were last year,” Ernst Moser, Team Director of Audi Sport Team Phoenix, is convinced. In recent days and weeks, his squad spent a lot of time internalizing the processes of a DTM weekend and to correctly interpret the most recent changes to the regulations.

“We have strong teams and all of them are able to win races and the championship,” says Dieter Gass, Head of DTM at Audi Sport. “Teamwork is a very important factor. We constantly exchange information and every team has access to the data of all eight cars. In view of the extreme competitiveness in the DTM, that’s our key to success.”