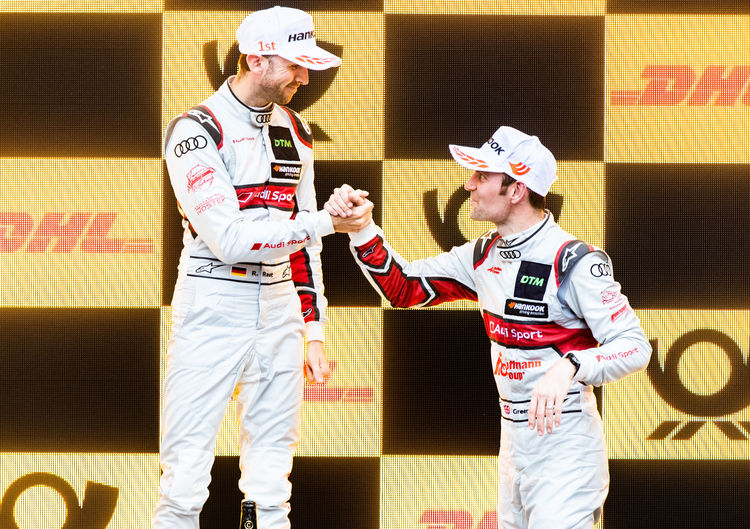 With a dominant victory by René Rast on Sunday and a strong comeback by Jamie Green, Audi Sport Team Rosberg captured the lead in the DTM teams’ classification at Zolder (Belgium).

“It was an incredibly tough weekend,” said Team Director Arno Zensen. “Our guys worked like crazy. René was incredible once again. But I was at least equally happy to see Jamie back in contention.”

Green most recently won a DTM race in October 2017 and since then achieved no podium finish anymore. Following sixth place in the first race on Saturday, the Briton, on Sunday, managed to bump BMW driver Sheldon van der Linde from third place on the last lap. “From ninth on the grid, the result today was a pleasant surprise,” said Green. “After the last season that was difficult for me the podium feels very good.”

René Rast secured a spot on the front row of the grid on both days, so scoring a total of four additional points at Zolder. On Saturday, he was short of clinching pole position by only 42 thousandths of a second, and only by six on Sunday. However, in the first race, Rast was among the drivers whose plans were thwarted by a safety car deployment. Rast had to make his mandatory pit stop after the restart, so dropping out of the points.

Due to a damaged intercooler, his team replaced the engine of his Audi RS 5 DTM overnight as a precaution. “The guys worked up until the early morning hours,” said Rast. “Even so, my car was immediately perfect again in qualifying on Sunday.”

In the race, Rast scored a dominant victory from second position on the grid in spite of a safety car period. For Rast, it marked the twelfth DTM triumph in total and the eighth in the last ten races. In addition, he is the first driver to have achieved two victories in the DTM’s new turbo era.