{{ activeItem() }}
Twitter
02/28/20
Race times and broadcast schedule for the @FIAFormulaE Marrakesh E-Prix. The lights go green tomorrow at 15:04 CET/… https://t.co/nYCze406G0
02/28/20
Good morning from Marrakesh. Preparing for Shakedown (14:00 CET) &amp; FP1 (16:45). @Daniel_Abt &amp; @LucasdiGrassi have b… https://t.co/OAurEpFLxO
02/27/20
Utilizing the sun: @LucasdiGrassi visited the very impressive Noor Power Station near Ouarzazate, Morocco. The worl… https://t.co/bsfs63yoPZ
02/27/20
Welcome to Marrakesh. Continuing to get ready today. A slight change this week: Shakedown &amp; FP1 will take place tom… https://t.co/oLwoGCzSC6
Audi Sport on Twitter
{{ activeItem() }}
Facebook
02/26/20
On track in Africa this week: the 2020 ABB Formula E Marrakesh E-Prix in Morocco on Saturday, February 29. >> audi.com/FormulaE #PerformanceIsAnAttitude #MarrakeshEPrix
02/24/20
He’s a busy man: from Mexico to Monza, Kempten and all the way back home to Switzerland (... even some gardening). Catch up with Nico Mueller in our latest #DriversDiary to find out what he has been up to this past week. >> audi.com/DTM #PerformanceIsAnAttitude #DTM
02/21/20
We’re always searching for technology to shape the future: Before the ABB Formula E Mexico City E-Prix, Daniel Abt and Lucas Di Grassi had a look at an exciting company developing artificial trees. >> audi.com/FormulaE #PerformanceIsAnAttitude #MexicoCityEPrix
02/17/20
Another week, another new episode of our #DriversDiary of Audi DTM factory driver Nico Mueller. Follow his week to find out what he was up to in Mexico City. >> audi.com/DTM #PerformanceIsAnAttitude #DTM
Audi Sport on Facebook 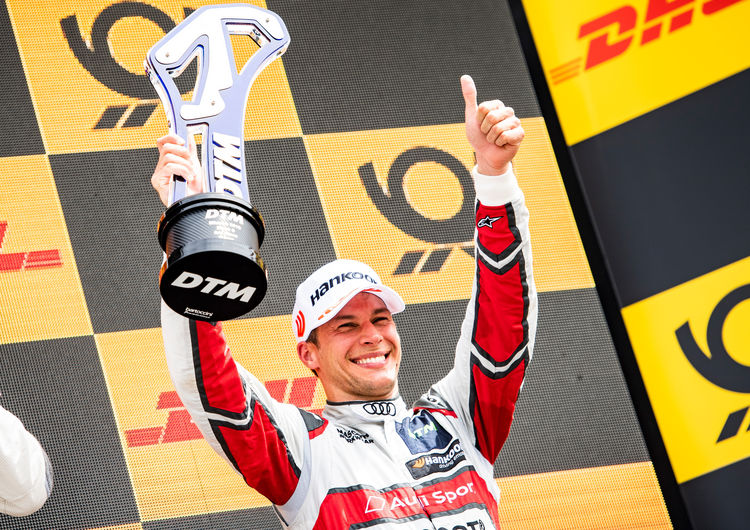 Last year, Loïc Duval clinched his first pole position in the DTM at Misano. And this time, the Frenchman again showed a strong performance right from the beginning at the circuit on the Adriatic Coast. “On Saturday, we were consistently fast in free practice, in qualifying and in the race,” said Duval after taking third place in the first race. “I feel that this podium is deserved, considering our performances this weekend. Without the safety car, it might even have turned into a second place.”

On Sunday, Duval was again in contention for a podium before being handed a drive-through penalty for contact with Robin Frijns. “That ruined my race,” said Duval. “We were very strong again today. It would have at least turned out to be podium, maybe even victory. Instead, my series of dark Sundays continued.”

Mike Rockenfeller came sixth on Saturday and tenth on Sunday. In the second race, “Rocky” pitted as early as after one lap because a safety car deployment seemed possible following an accident of Marco Wittmann. “Unfortunately, the safety car didn’t come,” said Rockenfeller. “It was a gamble that didn’t pan out because driving the entire race on one set of tires is extremely difficult at Misano. In the end, I finished tenth even though I was already running in eighth after a good start.”

“Loïc, like last year, was very strong here,” said Team Principal Ernst Moser. “It’s a shame that he had contact with Robin on Sunday, because he could have finished on the podium in both races. For Mike, the way things went this weekend wasn’t optimal. Even so, he scored points twice.”

At Misano, Team Manager Dirk Theimann celebrated his 65th birthday, for which the team presented him on Sunday morning with a special seat and a cake. A second cake, in media-effective style, landed in the face of the birthday child. The “culprit”: Mike Rockenfeller.