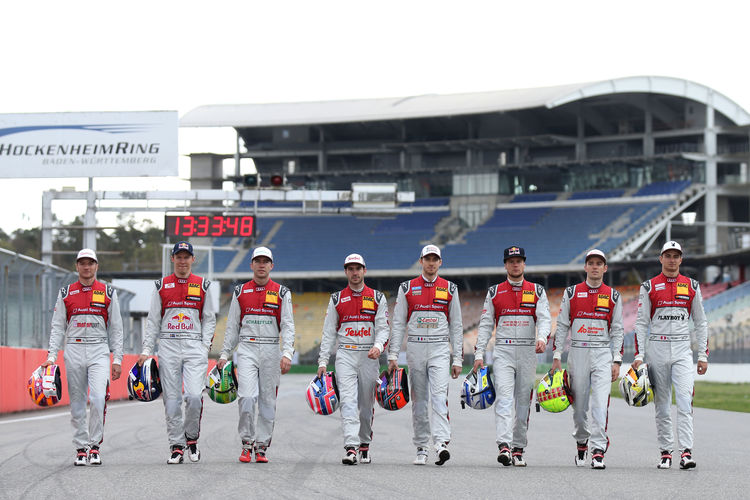 Following a long winter break, racing will finally start in earnest again for Audi Sport’s DTM squad next weekend. The Hockenheimring in Baden-Wuerttemberg will be hosting the first two races of the new DTM season on May 7 and 8.

Following 202 race-free days, not only DTM fans are simmering with excitement before the season opener. “At Audi Sport, we’re excited to see what effects the fine-tuning of the regulations will have as well,” says Dieter Gass, Head of DTM at Audi Sport. “The winter was long, but productive. We’re expecting an extremely close field.”

In recent months, Audi, BMW and Mercedes-Benz, together with the DMSB umbrella organization and the series’ marketer, ITR, intensively worked on delivering even more exciting races and action to the DTM spectators. That is why Gass is expecting an all the more challenging season “in which you can’t afford to lose sight of any detail or have a bad patch if you want to win the title.” The title is Audi Sport’s designated aim.

With ten victories in a total of 18 races, the Audi RS 5 DTM was the car to be beaten last season. The tally of the four rings at Hockenheim is impressive as well. Five victories in succession were celebrated by Audi on the Grand Prix circuit in Baden-Wuerttemberg. In the 2015 finale, the brand even achieved a one-two-three triumph. “Our aim is to pick up where we left off last year in a similarly powerful way,” says Dieter Gass. “We prepared ourselves well and had four productive test days at Hockenheim in early April, among other things. But: everyone knows how close the competition is in the DTM. We’re only going to see the relative strengths in qualifying on Saturday.”

That is the moment Audi driver Mattias Ekström is looking forward to with eager anticipation as well. “Even after 15 DTM years, the first qualifying session of the season is really special,” says the Swede who will be tackling a double commitment next weekend. In addition to the DTM, the two-time DTM Champion is going to compete in the round of the FIA World Rallycross Championship that will be attracting additional fans to Hockenheim.

Clearly, the DTM is Ekström’s top priority. The Audi factory driver knows how important a perfect start to the season is in the DTM. It’s not only about beating the competitors from BMW and Mercedes-Benz. He is also challenged to win against seven other strong Audi drivers – first and foremost Jamie Green. The Briton was the Audi driver with the best points score last season and won two of the four DTM races at Hockenheim as well. In addition, Miguel Molina, Edoardo Mortara, Nico Müller, Mike Rockenfeller, Timo Scheider and Adrien Tambay are set on mounting the top step of the podium this season, too.

Which Audi driver is running in what position during the race can now be seen on LED displays in the rear side windows of the Audi RS 5 DTM models. When the color of the digits switches from green to red, the driver can no longer flatten the rear wing angle, as the number of so-called DRS activations is limited for the first time this season – to an activation on 13 laps in race one on Saturday, May 7 (start at 16:00 CEST) and to 29 laps in the longer second race on Sunday, May 8 (start 14:30 CEST).

ARD will start to air live coverage of the season opener on Saturday at 15:35 (CEST) and of the second race on Sunday at 14:15 (CEST) on “Das Erste.” SPORT1 will be showing a one-hour summary each evening. In many other countries, the DTM can be watched live on television or on the DTM’s YouTube channel as well. Under the #DTMHockenheim hashtag, the races can be followed in social media. Tickets for the DTM season opener are available online at www.audi-motorsport.com.