Skip to content
We are using cookies for a better user experience.
12/02/19
Neuburg a. d. Donau
Sports

Links
{{ activeItem() }}
Twitter
07/01/20
35 days until the #ABBFormulaE season 6 restart in Berlin and we are testing at the @Lausitzring_de:… https://t.co/7z74QDNVtO
07/01/20
Congratulations on the signing of @Daniel_Abt for the @FIAFormulaE races in Berlin, @NIO333FormulaE. Daniel often p… https://t.co/dZ9eFAZt2n
06/30/20
Season highlights: @rccoracehome. 10 races with thrills, spills, banter and more together with our @DTM factory dri… https://t.co/DYsgJv0Vdd
06/29/20
The second @rccoracehome PlayStation 4 is up for grabs this week: Our 6 @DTM factory drivers signed 3 Limited Editi… https://t.co/aAN8GJsPZ2
Audi Sport on Twitter
{{ activeItem() }}
Facebook
06/30/20
10 races with thrills, spills, banter and more: Looking back on the first season of the RCCO #RaceHome charity racing series with our DTM factory drivers competing for a good cause. #RaceHome #AudiTogether #etron #StayHome #PerformanceIsAnAttitude #RaceAtHome
06/29/20
From the virtual RCCO #RaceHome season finale, to picking up his new ride and racing at the Green Hell – a fun week for Nico Mueller in his latest #DriversDiary. >> audi.com/DTM >> audi.com/GT3 #RaceHome #AudiTogether #etron #StayHome #PerformanceIsAnAttitude #RaceAtHome -------------------- Audi RS 6 Avant: Combined fuel consumption in l/100 km: 11,7 (20.1) – 11,5 (20.5); combined CO2 emissions in g/km: 268 (431.3) – 263 (423.3); Information on fuel consumption and CO2 emissions as well as efficiency classes in ranges depending on the tires and alloy wheel rims used. // www.audi.com/dat
06/25/20
“That was the car I really loved to drive. I felt really confident in the new A4.” Together with Mattias Ekström, we’re looking back on the era of the Audi A4 DTM – the car that scored 5 DTM drivers’ titles for us. >> audi.com/DTM #PerformanceIsAnAttitude #AudiTogether
06/24/20
The first season of the RCCO #RaceHome charity racing series is in the books. Check out our race highlights and broadcast from WeatherTech Raceway Laguna Seca: >> bit.ly/2Vb03ww #RaceHome #AudiTogether #etron #StayHome #PerformanceIsAnAttitude #RaceAtHome
Audi Sport on Facebook 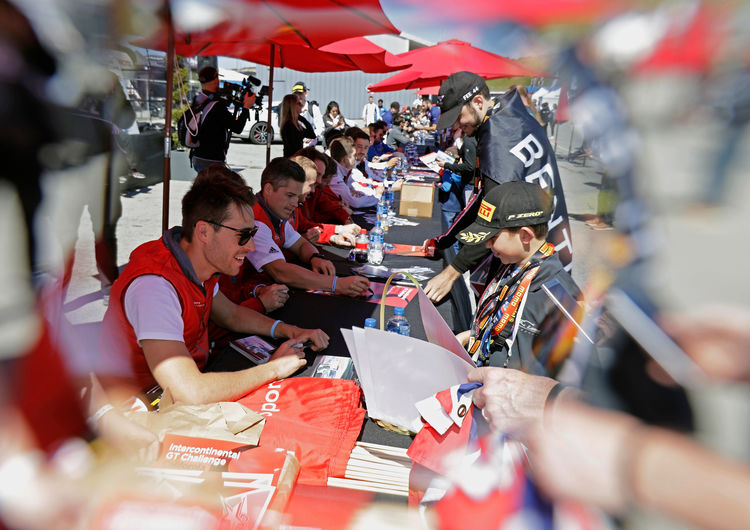 Audi’s GT driver lineup previously encompassed ten drivers. Now, the Italian Mirko Bortolotti and the Swiss Patric Niederhauser are complementing the squad. 29-year-old Bortolotti from Trento in Northern Italy is a former Formula One test driver and has won championship titles in the Italian Formula 3, the Eurocup Mégane Trophy, the Blancpain GT Series and the Blancpain GT Endurance Series. Niederhauser hails from Münsingen in the Swiss canton of Bern, is 28 years old, continued his career in single-seater racing and in LMP2 race cars after having won a championship title in the Italian Formula Abarth, has been driving GT race cars since 2015 and celebrated his biggest success this year: as the teammate of Audi Sport driver Kelvin van der Linde he won the ADAC GT Masters in an Audi R8 LMS from HCB-Rutronik Racing. “A warm welcome to both drivers. They’re a perfect complement to our team,” says Chris Reinke, Head of Audi Sport customer racing. “Mirko has been a professional race driver for many years and for Patric this promotion is a nice reward for the title success in Germany. There’s no doubt in our minds that Mirko and Patric are a great fit for us in terms of personality and racing.”

Audi Sport continues to have its previous ten GT experts on board: Mattia Drudi (I) in his first season with Audi in 2019 showed excellent performances in the Silver Cup of the Blancpain GT Series. Rahel Frey (CH) has won six GT3 races in her career so far and served as a mentor in the Audi Sport Seyffarth R8 LMS Cup, among other things. Christopher Haase (D) and Christopher Mies (D) have won the Blancpain GT Series, the FIA GT3 European Championship, the Nürburgring 24 Hours and many other competitions in an Audi R8 LMS. Frank Stippler (D), Pierre Kaffer (D), Dries Vanthoor (B) and Frédéric Vervisch (B) can include this year’s victory with Audi in the Nürburgring 24 Hours on the list of their biggest successes. Markus Winkelhock has celebrated five overall 24-hour race victories and is the 2017 Intercontinental GT Challenge Champion. Kelvin van der Linde (ZA) is a two-time winner of the ADAC GT Masters and another former Nürburgring winner.

In the 2020 season, Audi Sport customer racing will contest strategic events in the Intercontinental GT Challenge including the Spa 24 Hours, the Nürburgring 24 Hours and in the FIA GT World Cup in Macau. In addition, the Audi Sport drivers will compete in national and international programs of the numerous customer teams.