Skip to content
We are using cookies for a better user experience.
05/14/18
Neuburg a. d. Donau
Sports

Links
{{ activeItem() }}
Twitter
02/27/20
Welcome to Marrakesh. Continuing to get ready today. A slight change this week: Shakedown &amp; FP1 will take place tom… https://t.co/oLwoGCzSC6
02/26/20
BWT Mücke Motorsport returns to the ADAC @gtmasters in 2020 with two Audi R8 LMS entries: Audi R8 LMS #25: Mike B… https://t.co/33QnHvEGut
02/26/20
Click on the picture: All of the info that you need for this week’s @FIAFormulaE Marrakesh E-Prix at Circuit Intern… https://t.co/4RyvSddlQE
02/25/20
The current Fanboost standings: P10 @Daniel_Abt &amp; P13 @LucasdiGrassi. Help our drivers by voting online &gt;&gt;… https://t.co/uQBWFHEgbO
Audi Sport on Twitter
{{ activeItem() }}
Facebook
02/26/20
On track in Africa this week: the 2020 ABB Formula E Marrakesh E-Prix in Morocco on Saturday, February 29. >> audi.com/FormulaE #PerformanceIsAnAttitude #MarrakeshEPrix
02/24/20
He’s a busy man: from Mexico to Monza, Kempten and all the way back home to Switzerland (... even some gardening). Catch up with Nico Mueller in our latest #DriversDiary to find out what he has been up to this past week. >> audi.com/DTM #PerformanceIsAnAttitude #DTM
02/21/20
We’re always searching for technology to shape the future: Before the ABB Formula E Mexico City E-Prix, Daniel Abt and Lucas Di Grassi had a look at an exciting company developing artificial trees. >> audi.com/FormulaE #PerformanceIsAnAttitude #MexicoCityEPrix
02/17/20
Another week, another new episode of our #DriversDiary of Audi DTM factory driver Nico Mueller. Follow his week to find out what he was up to in Mexico City. >> audi.com/DTM #PerformanceIsAnAttitude #DTM
Audi Sport on Facebook 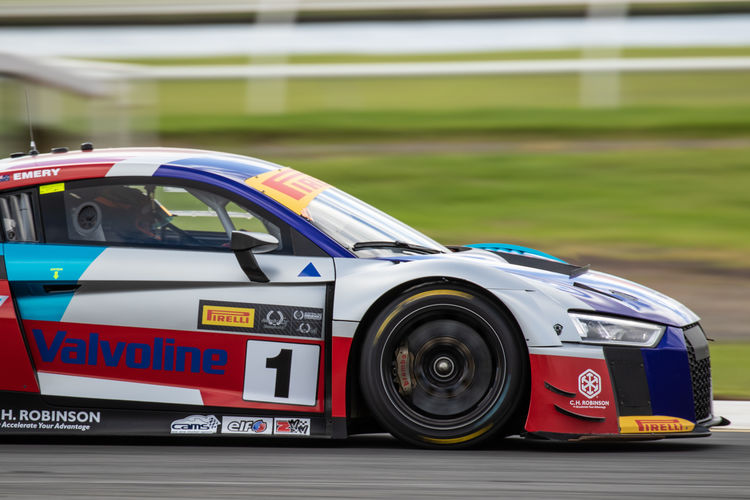 Victories in Australian GT racing: Tony Bates and Geoff Emery shared the victories on the third race weekend of the Australian GT Championship at Sandown. Bates won race two in the Audi R8 LMS. Emery decided race three in his favor and took second place in race one. In the Trophy classification, Nick Kelly prevailed in both of the first two races, and Rio Nugara in race three. Both campaigners relied on an Audi R8 LMS ultra.

Two victories in China: In the China GT opener, the Audi customer teams proved unbeatable. Round one at Zhuhai was won by Xu Jia/Alessio Picariello in an Audi R8 LMS, third place went to Cai Huibang/David Chen. In race two, Wang Liang/Will Bamber and Cai Huibang/David Chen celebrated a one-two result for Audi.

Podium in Asia: In the second event of the Blancpain GT Series Asia, Martin Rump/Franky Cheng achieved a podium result. The driver duo in the Audi R8 LMS of Absolute Racing clinched third place in race one on the track at Buriram in Thailand. The Estonian and the Chinese are now sharing fourth place in the drivers’ standings.

New owner: The Audi R8 LMS with which Audi Sport Team Land won the Nürburgring 24 Hours in 2017 has a new owner. The Montaplast company acquired the race winner from Audi Sport customer racing. CEO Christian Stulz took over the GT3 sports car in its original condition at the Nürburgring on May 12 in the presence of Michael-Julius Renz, Managing Director of Audi Sport GmbH.

Two race wins at the Nürburgring: Bhurit Bhirombhakdi in the German debut of the Audi Sport R8 LMS Cup won both races in the Eifel. In race two, the race driver from Thailand benefited from an accident in which Yasser Shahin and Andrew Haryanto were involved. Although Haryanto in fourth place saved his lead of the standings Bhirombhakdi has now reduced his deficit to the Indonesian to eight points. In addition, Bhirombhakdi secured a coveted prize. As the best driver in the second event of the Audi Sport R8 LMS Cup he has a sure place in the cockpit of an Audi R8 LMS in the 2019 24 Hours of Spa. Andrew Haryanto and Carsten Tilke completed the podium in race one. In race two, Sun Jingzu from China and Carsten Tilke, once more, mounted the podium. The German Stefan Wieninger won the GT4 classification in both rounds, trailed by Carlos Checa. In his active career in professional motorcycle racing, the Spaniard was Superbike World Champion and thrilled the fans in the Eifel with a successful performance in Audi’s GT4 sports car. Subsequently, he did a formation lap on a Ducati in front of the field of the 24-hour race.

Three trophies in Australia: The Audi R8 LMS GT4 raced in the Australian GT Championship on the third championship weekend on the circuit at Sandown. Victor Zagame clinched second place in race one and third place in the following two races.