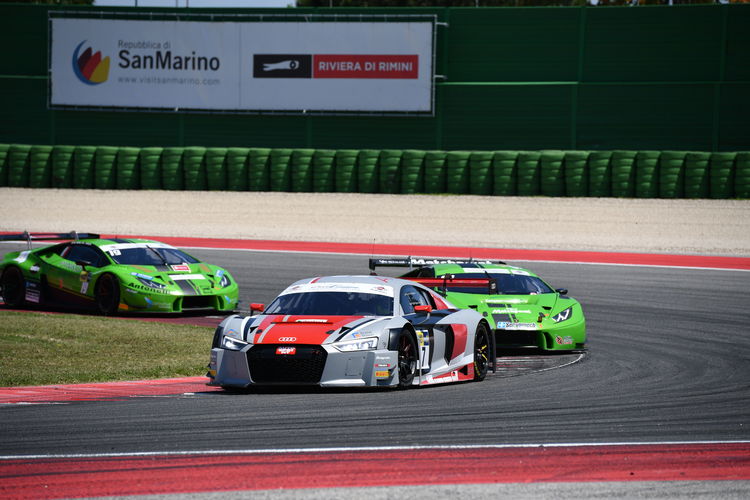 From tenth place to second place: Bar Baruch with guest entrant Jamie Green has achieved his most successful weekend for Audi Sport Italia in the Italian GT Championship to date. On the third race weekend at Misano, the driver from Israel shared the cockpit of the Audi R8 LMS with British Audi factory driver Jamie Green who had clinched pole position for race one. The duo won this round with a 7.7-second advantage. Baruch started race two from position five on the grid. As Green, due to the previous victory, had an additional 15-second wait during the driver change as required by the regulations, he resumed the hunt in position seven and advanced to third place. As a result, Bar Baruch managed the leap from tenth to second place in the drivers’ standings, separated from the top spot by only five points.

Trophies in Pearl River Delta: On the second race weekend of the Circuit Hero Series in China, the Audi teams celebrated success. Adderly Fong from Hong Kong won the first race in an Audi R8 LMS from Zun Motorsport at Zhuhai. Second place went to Audi privateer Julio Acosta and third to Italian Max Wiser in another R8 LMS. In the GTC class, Audi privateer David Chen clinched second place ahead of his brand colleague Shaun Thong. In race two, Max Wiser managed a strong start from position three. He took the lead and went on to celebrate the first victory of Team TSRT in this series this season. Julio Acosta again secured second place while Fong finished third. In the GTC classification, Shaun Thong as the best Audi driver clinched second place.

Marcin Jedliński unbeatable in home round: Marcin Jedliński on the third race weekend of the FIA CEZ at Poznań, won all three races in an Audi R8 LMS. The Polish Audi privateer decided the endurance race in his favor as well as the two sprint races. The Czech Richard Chlad and his son, Richard Chlad jr., finished the endurance race in second place in an Audi R8 LMS ultra. Additionally, Chlad jr. placed second in both sprints. Stanisław Jedliński completed the result in the second sprint to an Audi podium lockout: The Polish race driver in his Audi R8 LMS clinched third place.

Two victories in Scandinavia: Jan Brunstedt managed a perfect second race weekend in the Swedish GT Championship. The JB Motorsport team principal and driver on the circuit of Anderstorp, South Sweden, won both races in an Audi R8 LMS ultra and is now runner-up in the standings.

Three podium places in Australia: In round three of the Victorian State Circuit Racing Championships at Winton, Ryan How was the best of the three Audi drivers in the field. In each of the three races, How took third place in an Audi R8 LMS.

First victory in the STCC: On the second race weekend of the Scandinavian Touring Car Championship (STCC), an Audi driver celebrated a victory for the first time. Tobias Brink from Team Brink Motorsport in an Audi RS 3 LMS won race two at Anderstorp with a 1.9-second advantage.

Two successes in China: The Audi RS 3 LMS was unbeatable on the second race weekend of the Circuit Hero Series in China. At Zhuhai, in race one, Filipe Souza from Macau won the TCR class with an advantage of one tenth of a second ahead of Billy Lo. In round two, victory again went to Souza after the provisional winner, Billy Lo, received a penalty for jump-starting and dropped to fourth position.

Next hill-climb success: Luis Nunes remains unbeaten in his class in Portuguese hill-climb racing. On the fourth of eight race weekends of the Campeonato de Portugal de Montanha, the Rampa de Santa Marta round, the Portuguese in an Audi RS 3 LMS decided Division 4 of the touring cars in his favor, marking his fourth consecutive victory this season.

Podium in Italy: Plamen Kralev in an Audi RS 3 LMS clinched a trophy in the TCR Italy. The Team Kraf Racing privateer driver from Bulgaria had started from sixth place at Misano and advanced to position three in race one.

Traveling to Portugal with victory: Jean-Karl Vernay is traveling to round five of the WTCR – FIA World Touring Car Cup as the best Audi driver. The Frenchman is ranked in position four of the table and before the race at Vila Real is particularly motivated. Since his second victory this season at Zandvoort on May 21, he has clinched another success in an Audi RS 3 LMS: The 30-year-old pro won TCR Europe round five at Spa. A special feature is awaiting Vernay and his two fellow Audi Sport drivers Gordon Shedden and Frédéric Vervisch as well as Audi privateers Nathanaël Berthon, Denis Dupont and Aurélien Panis on the city street circuit in Portugal: The regulations prescribe a “Joker Lap.” The normal direction of traffic in a circle that is part of the city circuit is on the right-hand side but must be driven once on the left by all drivers in each race.