Skip to content
We are using cookies for a better user experience.
03/19/21
Neuburg a. d. Donau
Sport 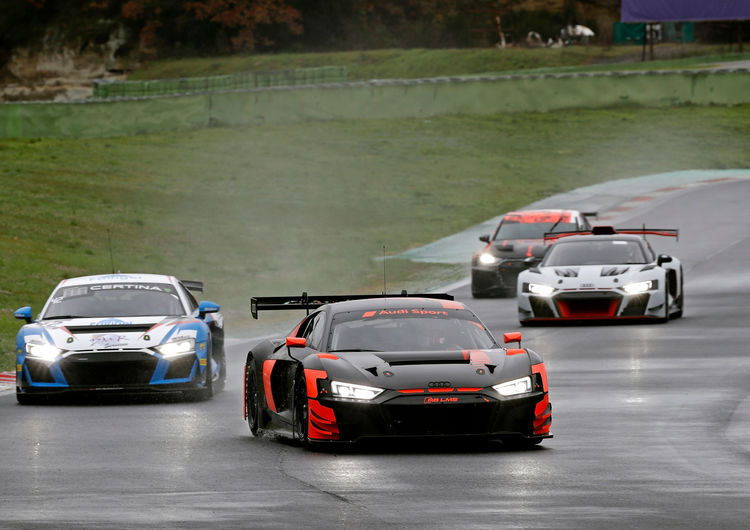 Following last year’s first event at the Lausitzring and a date at Portimão, Audi Sport customer racing organized a joint test with customer teams for the third time. On the Vallelunga circuit north of Rome, up to 13 race cars with the four rings were on the road for three days. The test days served to prepare for the European season after teams in America, Asia and Australia have already clinched their first trophies since January.

“The positive response from teams from five countries is pleasing and confirms the concept of a joint test that we intend to offer in the future as well,” says Chris Reinke, Head of Audi Sport customer racing. In changeable weather on a wet but also completely dry track, the drivers of the customer teams as well as of Audi Sport customer racing sat behind the steering wheel. Christopher Haase, Patric Niederhauser and Nico Müller drove the two GT3 race cars from Audi Sport. Mattia Drudi was at Vallelunga as driver coach for Audi Sport Italia. Kelvin van der Linde and Mike Rockenfeller worked with ABT Sportsline for the 2021 DTM season, Markus Winkelhock with Saintéloc Racing for the GT World Challenge Europe. The French team, as defending champions in the FFSA GT4 France, also had two Audi R8 LMS GT4 cars in Italy. The Swiss team Capricorn had come to Vallelunga with a first-generation Audi R8 LMS. PK Carsport from Belgium was also the first customer team on site to enter the new GT2 European Series with an Audi R8 LMS GT2. Finally, new signing Nathanaël Berthon and Frédéric Vervisch continued Audi Sport’s test program with the second-generation Audi RS 3 LMS.

“While the customer teams completed their own programs and achieved productive results, our program included set-up runs with the GT3 sports cars. In the process, we completed a total of 1,250 test kilometers and gained interesting insights in changing weather conditions,” said Stefan Gugger, Project Manager Audi R8 LMS GT3. On April 3–5, Saintéloc Racing will start into the FFSA GT4 France season at Nogaro. Two weeks later, the GT World Challenge Europe and the GT2 European Series will start at Monza. From April 30 to May 2, Audi Sport Italia will contest the season opener in the Italian GT Championship and two weeks later the ADAC GT Masters will begin at Oschersleben. A season highlight for Audi Sport is the Nürburgring 24 Hours from June 3 to 6. The brand is aiming for its sixth overall victory there while the new Audi RS 3 LMS will make its race debut in the FIA WTCR at the same event. The new DTM season starts for the Audi teams ABT Sportsline and Rosberg at Monza from June 18 to 20. In addition, numerous Audi Sport customers contest various other series in Europe and all over the world.