Skip to content
We are using cookies for a better user experience.
06/10/19
Neuburg a. d. Donau
Sports 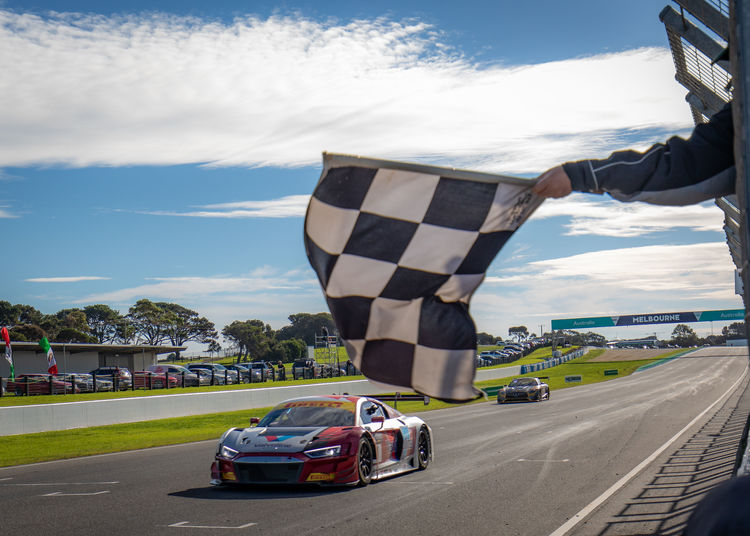 The Audi R8 LMS proved its class in the Australian GT Championship, in the ADAC GT Masters and in the Thailand Super Series. Victories in the TCR Europe, the ADAC TCR Germany and the GT4 America top off a successful weekend of Audi Sport customer racing.

Third Audi victory in Australia: For the third time, an Audi R8 LMS was unbeatable in the current season of the Australian GT Championship. Geoff Emery, who had previously celebrated a sprint victory, scored his first endurance racing success on the third race weekend of the series. Last year’s champion shared the cockpit in Team Valvoline with Garth Tander at Phillip Island. After three hours of racing, the Australian driver duo won with a 22-second advantage. As a result, Emery is also the new leader of the standings.

Lead of the standings thanks to fightback from eighth to a podium finish: Team HCB-Rutronik Racing as Audi Sport’s best customer team clinched a trophy on the third race weekend of the ADAC GT Masters. From eighth on the grid, Kelvin van der Linde/Patric Niederhauser in race two at the Red Bull Ring improved to third position. In an attack six laps before the end, Swiss privateer Niederhauser snatched the podium from Sven Barth who was driving in front of him. The reward for this effort: Kelvin van der Linde and Patric Niederhauser retain the lead of the standings and are entering the two-month summer break of the ADAC GT Masters with a ten-point advantage. HCB-Rutronik Racing is leading the teams’ classification as well.

Front runners in Thailand: Henk Kiks/Daniel Bilski on clinching their second victory this season in the Thailand Super Series took the lead of the standings. Their success on the circuit at Buriram was hard-fought: Kiks in the most recent evolution of the Audi R8 LMS, after spinning in the early stage, dropped to position 15. The Dutchman immediately fought back to eighth place before turning the car over to his teammate, Daniel Bilski. The Australian forcefully stormed forward and won the second race with more than a 22-second advantage. The day before, Team B-Quik Racing had already clinched a trophy: Martin Rump from Estonia and Sandy Stuvik from Thailand had achieved third place in an Audi R8 LMS ultra.

Successful home round: In round three of the FIA CEZ at Poznaň, the Audi customer teams clinched two one-two results in the sprint races. Team Olimp Racing from Poland won both races with Marcin Jedliński in an Audi R8 LMS ahead of Czech Richard Chlad junior in another Audi. In the one-hour endurance race, Marcin Jedliński scored another victory, while Richard Chlad jr./Dan Skalicky took third place.

Second victory of the season in New Zealand: After Neil Foster/Jonny Reid with Team IMS had already decided the opening round in the North Island Endurance Series in their favor they were successful again on the third race weekend. On the race track at Hampton Downs, the local driver duo won the three-hour race in an Audi R8 LMS with a one-lap advantage. A second customer team clinched a trophy as well: Jon and Dan Udy in another Audi R8 LMS achieved third place.

Victory for Rearden Racing: Team Rearden Racing scored its second victory this season in the GT4 America West racing series. After Jeff Burton/Vesko Kozarov in an Audi R8 LMS GT4 had previously been victorious in the opening event at Austin they were successful again at Sonoma. On the third race weekend, the driver duo won the first round with an advantage of 0.457 seconds. In round two, the two Americans crossed the finish line in third position of the GT4 America West.

Plenty of variety in the Audi Sport Seyffarth R8 LMS Cup: The second weekend of the one-make cup saw two new faces on the top step at the podium ceremony. The first race at Misano was dominated by Leonard Hoogenboom. The Dutchman in an Audi R8 LMS GT4 had started from pole position and went on to clinch a dominant victory with a 19-second advantage. Second place went to Robin Rogalski, third to Rudolf Rhyn. The second race belonged to Stefano Comini. After the Swiss had previously battled for the top spots in round one, but then had to sit a drive-through penalty, he perfectly converted his pole position in round two. He was leading the race and was briefly put under pressure by Hoogenboom, who, due to a driving mistake, though, slipped off the tarmac and thus had to give up his attack. At the finish, Rudolf Rhyn again followed Comini and Hoogenboom in third position. Robin Rogalski, with an eight-point advantage, remains leader of the standings after three of seven events.

Leader of the standings thanks to best performance this season: Antti Buri on the third race weekend of the ADAC TCR Germany in Austria achieved his personal best performance this season. The Finn from Team LMS Racing improved from seventh on the grid to third position in the first race. In the second race, he stormed to the top spot from fourth on the grid in an Audi RS 3 LMS. His third victory this season means that the 30-year-old privateer has now taken the lead of the standings as well. Buri currently ranks 13 points ahead of last year’s champion Harald Proczyk. René Kircher recorded his best result this season as well. The up-and-coming driver from Team Hella Pagid Racing One in an Audi RS 3 LMS scored third position on Sunday as his first podium finish this year. In the juniors’ classification, he is now in the third spot, just three points off the leader of the standings.

First victory this season in the TCR Europe: Gilles Magnus celebrated his first race victory in an Audi RS 3 LMS. The Belgian from Team Comtoyou Racing had entered race one from pole position in his home round at Spa. Following a nice battle with Santiago Urrutia in an Audi RS 3 LMS of Team WRT, Magnus claimed victory with a one-and-a-half-second advantage ahead of his fellow Audi driver from Uruguay. In the standings, Magnus is ranked as the runner-up with a 13-point deficit after three of seven events.

Guest entry in the FIA WTCR: Antti Buri will augment the field in the WTCR – FIA World Touring Car Cup at the Nürburgring. The Finn has been regularly contesting the ADAC TCR Germany with the LMS Racing customer team since 2016. Since 2017, he has been relying on the Audi RS 3 LMS in which he has won five races to date, three of them this season. He is currently the leader of the standings in the German racing series. Buri is intimately familiar with the Nordschleife of the Nürburgring. He has contested the 24-hour race there twice, having won the TCR class last year. Further TCR class wins in 12- and 24-hour races complete his track record. The 30-year-old race driver from Turku is the first Finn in the FIA WTCR and continues a family tradition under the banner of the four rings: his father was active in rally racing with Audi as far back as in the eighties.

First podium in Australia: The Audi RS 3 LMS posted its first podium result in the TCR Australia on the second race weekend. Newcomer Hamish Ribarits in the field of 18 entrants finished round two at Phillip Island in third place for the Melbourne Performance Centre.