Skip to content
We are using cookies for a better user experience.
11/12/18
Neuburg a. d. Donau
Sports 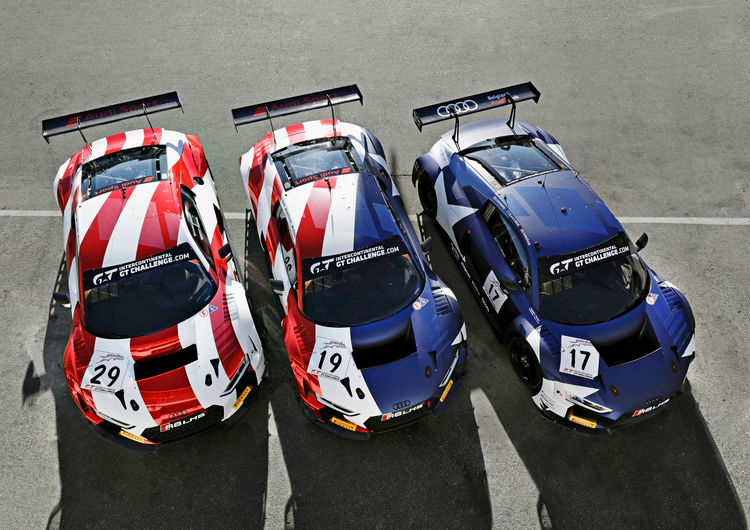 On the grid around the world: Audi Sport customer racing will continue two successful programs in 2019. The fourth consecutive year will see at least two Audi R8 LMS GT3 cars at each round of the Intercontinental GT Challenge. In the manufacturers’ classification, Audi, after three victories in succession, will be challenged to successfully defend the title. In the drivers’ classification, the coveted trophy is to return to Neuburg an der Donau in 2019. The worldwide racing series featuring one endurance race per continent will encompass five events for the first time in 2019. In addition to the previously known rounds at Bathurst (Australia), Laguna Seca (USA), Spa (Belgium) and Suzuka (Japan), South Africa will make its first appearance on the calendar. In addition, Audi Sport customer racing has confirmed its participation in the Nürburgring 24 Hours. Audi Sport commits to the touring car category worldwide as well. In 2019, the Audi RS 3 LMS will again compete in the WTCR – FIA World Touring Car Cup that debuted this year as the highest-caliber international racing series for TCR touring cars. Audi Sport Leopard Lukoil Team, Audi Sport Team Comtoyou and Comtoyou Racing with Audi Sport drivers Gordon Shedden, Jean-Karl Vernay, Frédéric Vervisch and privateers Nathanaël Berthon, Denis Dupont and Aurélien Panis have clinched 15 podium finishes in the 2018 season to date, including four victories. Before the finale in Macau next weekend, all drivers combined have scored a total of 757 points in the Audi RS 3 LMS.

First new-generation Audi R8 LMS delivered: The first customer to have received the evolution of the Audi R8 LMS is Team Attempto Racing. Team Principal Arkin Aka took over the most recent evolution of the successful GT3 race car from Chris Reinke, Head of Audi Sport customer racing, in Neuburg an der Donau. In its first season with Audi Sport customer racing, the outfit based in Hanover achieved third place in the Blancpain GT Series Sprint Cup with Kelvin van der Linde/Steijn Schothorst in September.

Calendar for 2019 announced: Even before the 2018 season’s finale, the Audi Sport R8 LMS Cup has finalized all the key dates for 2019. The one-make cup that will continue to be open exclusively to privateers in season eight will contest ten sprint races spread across Australia, China, Japan and Malaysia. Like last year, the season will kick off on the street circuit of Adelaide that was visited most recently by more than 270,000 spectators. In Zhuhai and in Shanghai, the Cup will race in front of a Chinese audience. In Japan, the Audi Sport R8 LMS Cup will take place as part of the supporting program of the 10 Hours of Suzuka, a round of the Intercontinental GT Challenge. For the finale, the one-make cup, like this year, will visit the circuit at Sepang in Malaysia. In addition to the existing generations of the Audi R8 LMS GT3 and the GT4 version of the race car, the new evolution will be on the grid as well. Prizes in 2019, besides an edition version of the Audi R8 for the overall winner, will include a cockpit for the three drivers in the 2020 event of the 10 Hours of Suzuka. The GT4 winner of the series will compete in 2020 in the SIC 888 endurance race at Shanghai. Additional prizes complete the attractive offering in which amateurs with guidance by pros are able to optimize their skills in the cockpit, in preparation and in data analysis.

Two podium finishes in Spain: Two Audi customers returned from the fifth and final round of the Campeonato de España de Resistencia at Barcelona with trophies. Daniel Díaz-Varela and Manel Cerqueda in an Audi R8 LMS GT4 achieved second place in the C3 class and position two in the overall classification. The driver duo from Baporo Motorsport had to admit defeat by only 0.304 seconds. Team SPV Racing in another Audi R8 LMS GT4 completed the podium: The Swedes Frederik Danner/Per Anderson finished third after two hours of racing.

Second place in America: In the Michelin IMSA SportsCar Encore at Sebring that was held as a single event for the first time, GMG Racing scored a podium result in the GT4 class. Jason Bell/Andy Lally/James Sofronas shared an Audi R8 LMS GT4 in the four-hour race and crossed the finish line in Florida in second position.

Two victories at Vallelunga: In the 6 Hours of Rome, the team of Mariano Costamagna celebrated a class victory in an Audi RS 3 LMS. Marco and Mariano Costamagna, Gianluigi Ghione and Roberto Olivo won the Silver Cup at Vallelunga. The same event saw another victory of an Audi customer team in the Endurance 2.0 competition in which TCR race cars were exclusively eligible to compete. Enrico Bettera won the two-hour race with an advantage of 1m 36s in an Audi RS 3 LMS of Team Pit Lane Competizioni.