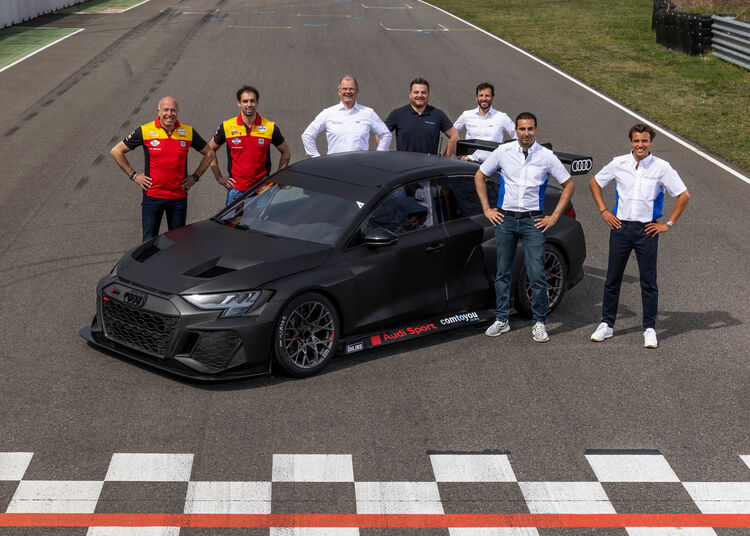 The Audi RS 3 LMS gen II is about to enter its second season in the FIA WTCR. The newly designed touring car made a strong debut in this racing series in 2021 with one title and four runner-up finishes in the standings. Currently, Comtoyou Racing, as a team from the WTCR’s very beginning, is preparing for its fifth season in the most prestigious and toughest worldwide TCR racing series together with Audi Sport customer racing. The season kicks off on May 7 and 8 at the Pau street circuit in France.

“We want to continue the successful streak of the Audi RS 3 LMS in 2022,” says Chris Reinke, Head of Audi Sport customer racing. “Three race wins, twelve podium places, four times first on the grid, six fastest laps and the contribution of these successes to the ‘TCR Model of the Year’ convey a clear message. With Comtoyou Racing as a reliable and competent partner, we are banking on continuity.” Since the FIA WTCR was held for the first time in 2018, team owner Jean-Michel Baert and team manager François Verbist and the squad from Waterloo, south of the Belgian capital Brussels, have so far brought the Audi RS 3 LMS to the grid in each of the 92 races.

The 32-year-old French Audi Sport driver Nathanaël Berthon, who did valuable development work for Audi’s new TCR model in addition to his racing season in 2021, brings three years of experience from the FIA WTCR. For the first time, 22-year-old junior driver Gilles Magnus is part of the Audi Sport driver squad. The Belgian won a selection competition of the Belgian automobile club RACB at the brand’s headquarters in Neuburg in 2018. In 2020, he was the winner of the rookie classification of the FIA WTCR and the best Trophy driver in 2021. Likewise, he was the only privateer driver to achieve an overall victory in a WTCR race in the previous year.

Popular with fans and media alike, Dutchman Tom Coronel is driving an Audi RS 3 LMS for the third year in a row, with which he also contests the TCR Europe in parallel to the FIA WTCR. He claimed the first trophy for the Audi RS 3 LMS gen II in Spain last year and was second best privateer driver behind Magnus at the end of the year. This month, Coronel celebrated his 50th birthday and is entering his 33rd motorsport season. He forms the Comtoyou DHL Team Audi Sport driver team with Nathanaël Berthon.

Mehdi Bennani returns to Jean-Michel Baert this year. In 2020, the race driver from Morocco won the TCR Europe in an Audi with Comtoyou Racing and already competed in the FIA WTCR in 2018 and 2019. The 38-year-old race driver brings many years of international experience with him and is registered for Comtoyou Team Audi Sport alongside Gilles Magnus.

The 2022 FIA WTCR season kicks off on May 7 and 8 at the equally picturesque and challenging Pau circuit in the Pyrenean foothills of southwestern France. The tradition-steeped street circuit is part of the calendar for the first time. The innovations for the 2022 season in the WTCR include a modified points system with new incentives for the qualifying which is divided into three parts to further intensify the competition. Likewise, there are now higher point totals for the first sprint race. In the second sprint, the first ten competitors line up in reverse order of the qualifying result. This guarantees plenty of variety in the races: Last year, no fewer than twelve different drivers managed to win in the course of 16 races.

The teams and drivers in the 2022 FIA WTCR