Skip to content
We are using cookies for a better user experience.
02/11/19
Neuburg a. d. Donau
Sport

Audi Sport ABT Schaeffler shoots for the hat-trick in Mexico 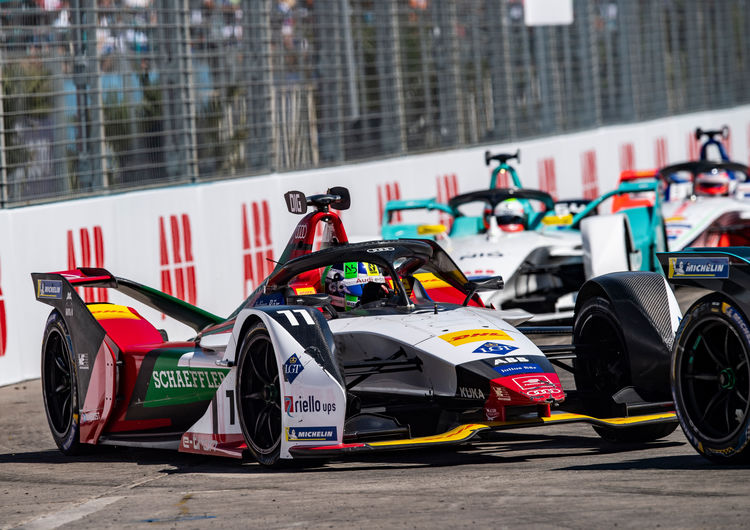 There are not many tracks that Daniel Abt and Lucas di Grassi have such fond memories of as the one in Mexico: Both drivers of the Audi Sport ABT Schaeffler team have previously celebrated victories here and have set their sights on claiming the top spot again at the next round on Saturday (February 16).

The previous two rounds in Mexico City numbered among the most spectacular races that Formula E has seen to date – and at both events, Audi drivers took the spoils: In 2017, Lucas di Grassi, on delivering a masterful performance of driving skill and strategy, pulling off a sensational victory despite a collision on lap one to replace his rear wing. A year later, from fifth on the grid, Daniel Abt went on to celebrate his first ever triumph in Formula E, which also marked the first success of a German in the fully electric racing series.

“Needless to say, it’s a great feeling for the whole squad to return to a venue with so many good memories,” says Team Principal Allan McNish. “However, that doesn’t mean that we’re now preparing ourselves any less. Just the opposite: We made good progress in Santiago and saw how fast our Audi e-tron FE05 is. That’s exactly what we want to build on in Mexico to get us onto the podium again.”

Formula E will race on the 2.093-kilometer Autódromo Hermanos Rodríguez circuit for the fourth time. It is the only permanent race track of the season and the drivers love the circuit – particularly due to the very special atmosphere in the stadium filled with thousands of spectators. “The Mexican fans are simply amazing and the atmosphere in the stadium is unique – we can even hear the fans cheering in the grandstands during the race,” says Daniel Abt.

For the German, the season finally began for good on clinching his first podium, including the fastest race lap in Santiago. “The trophy was a sweet reward for all of the hard work done by the whole squad the weeks before but, above all, it whets our appetite for more,” says Daniel Abt. “Mexico will always have a special place in my memories, because that’s where I scored my first Formula E victory. We know that we’re able to repeat such a success if we pull off a perfect day.”

Lucas di Grassi demonstrated his class in Santiago on setting a fabulous time in the Super Pole qualifying, but ultimately went home without any points after several penalties. “Even though I ended up empty-handed, we learned a lot in Santiago. The most important message is that we’re able to win races,” says the Brazilian. “Mexico is a track that suited us well in recent years. Although the cards have been completely reshuffled this season and the competition is fiercer than ever before, we’ll continue to work hard on improving ourselves. With an impeccable race day we can be in contention for the top spot.”

With one victory and three additional podium finishes the e-tron FE05, which has been jointly developed by Audi and technology partner Schaeffler, is the most successful car in the field after three races. Besides the Audi Sport ABT Schaeffler factory team, the Envision Virgin Racing customer team with Sam Bird and Robin Frijns also races with the Audi e-tron FE05. Following Bird’s first victory this season in Santiago, the team is heading both the teams’ and drivers’ standings.

For Audi, the Mexican round marks one of the highlights on the calendar off the track as well: The brand is expecting nearly 1,000 guests, many of whom will get a taste of the new models during an Audi driving experience event at the facilities of Autódromo Hermanos Rodríguez.

The fourth round of the Formula E season in Mexico will start at 4 PM local time (11 PM CET) and, as always, lasts for 45 minutes, plus one lap. Eurosport will air live coverage from Mexico City. All international channels including broadcast schedules can be found online at www.fiaformulae.com.

Basic Information: Audi in Formula E 2018/2019
Video: Daniel Abt and Lucas di Grassi look ahead to the race in Mexico City