Audi RS 5 DTM before start of the season

{{ activeItem() }}
Twitter
09/23/21
MEDIAINFO: 100 days to go until the Dakar Rally: A race against time for Audi Sport &gt;&gt; https://t.co/tNLOfBm45l… https://t.co/xsF4kkNwxL
09/23/21
[1/2] Good luck to the Audi teams: 🇪🇸 @GTWorldChEu Sprint Cup finale at @CircuitValencia 🇩🇪 NLS @vln_de at… https://t.co/vv3SZUrN78
09/21/21
From the USA to Germany, we are welcoming an iconic driver to the Audi family. Get ready for a new type of high per… https://t.co/9jxN8IZset
09/21/21
MEDIAINFO: Welcome! Audi electrifies with U.S. star Ken Block &gt;&gt; https://t.co/8LMhH7KPDe #FutureIsAnAttitude… https://t.co/5G1CPyZm0c
Audi Sport on Twitter
{{ activeItem() }}
Facebook
09/23/21
Under the skin of our new Audi RS Q e-tron. T-100 days until the start of the 2022 Dakar Rally. >> audi.com/Dakar #FutureIsAnAttitude #RoadToDakar #Dakar2022 #RSQe-tron -------------------- This vehicle shown here is the Rally Dakar vehicle that is not available as a production model.
09/21/21
Racer, drifter, progressive thinker. There is a new face on the block who is ready to redefine high performance. Meet the newest member of our team now >> at.audi/KenBlock #FutureIsAnAttitude #Audi #AudiSport #etron -------------------- This vehicle shown here is the Rally Dakar vehicle that is not available as a production model.
09/20/21
Electrifying and exhilarating. Our partners at FC Bayern München got to experience the Audi RS e-tron GT* with a memorable afternoon at the Audi driving experience center at Neuburg an der Donau. Driving change never looked so fun. Discover more at >> at.audi/fcb-meets-e-tronGT #AudixFCB #FutureIsAnAttitude #etronGT #emobility -------------------- *Power consumption, combined*: 20.2–19.3 kWh/100km (NEDC); 22.5–20.6 kWh/100km (WLTP)CO₂ emissions, combined*: 0 g/km Closed roads/professional drivers,instructors present / do not copy.
09/20/21
Audi Sport Italia is on top of the standings in Italy thanks to another victory with the Audi R8 LMS. Adding to the success was a second overall GT3 triumph in China, a DTM Trophy win with the Audi R8 LMS GT4 and podiums for the Audi RS 3 LMS in four countries – just some of the highlights. Well done to our customers! 🇮🇹 🇨🇳 🇳🇱 🇩🇪 🇳🇴 🇪🇸 🇭🇷 >> audi.com/GT3 >> audi.com/GT4 >> audi.com/TCR #PerformanceIsAnAttitude
Audi Sport on Facebook 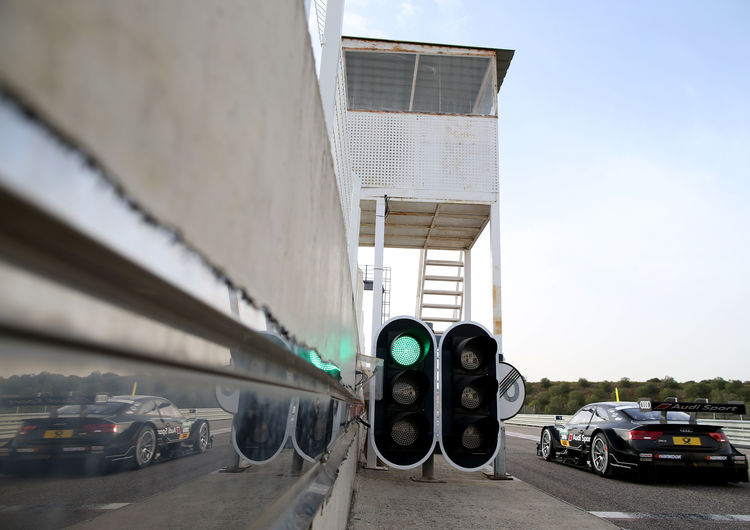 Two and a half months before the first race of the new DTM season, the winter break is over: Mattias Ekström and Jamie Green are performing important tests with the Audi RS 5 DTM at Monteblanco, Spain, this week.

The number of test days is heavily limited in the DTM, with only one more pre-season test scheduled before the season opener at Hockenheim on May 7. Consequently, the three days near Seville are particularly valuable for the Audi Sport test team. “The test at Monteblanco offers the only opportunity to check the effectiveness of the ideas our engineers worked out in winter before we pass them on to our teams,” says Dieter Gass, Head of DTM at Audi Sport.

During the Hockenheim pre-season test from April 4 to 8, all eight Audi drivers together with their teams will have the opportunity to prepare for the new season at the wheel of their race cars. In contrast, only two test versions of the Audi RS 5 DTM and two drivers have been deployed to Monteblanco. “Obviously, all our drivers would like to drive in Spain as well,” says Gass. “But to achieve optimum test results, we prefer to use only one driver per car.” Selected for the test were the two best-placed drivers of the past season, Jamie Green and Mattias Ekström.

In terms of technology, the Audi RS 5 DTM has not changed compared with last year – as changes are prohibited by the regulations. Detailed improvements, however, are possible – and they existed even with a car that won ten of the 18 DTM races last year. “We concentrated on discovering and analyzing weak points in order to tackle any area in which we can still make some adjustments,” says Gass. “This was primarily focused on reliability and fine-tuning work for race tracks on which we were not so strong last year.”

Now Jamie Green and Mattias Ekström are tasked to verify the results of the fine-tuning work on the race track. While Ekström participated in the DTM Young Driver Test at Jerez in early December as a reference driver, Green is taking the wheel of the Audi RS 5 DTM for the first time again since his victory in the DTM finale at Hockenheim in October.