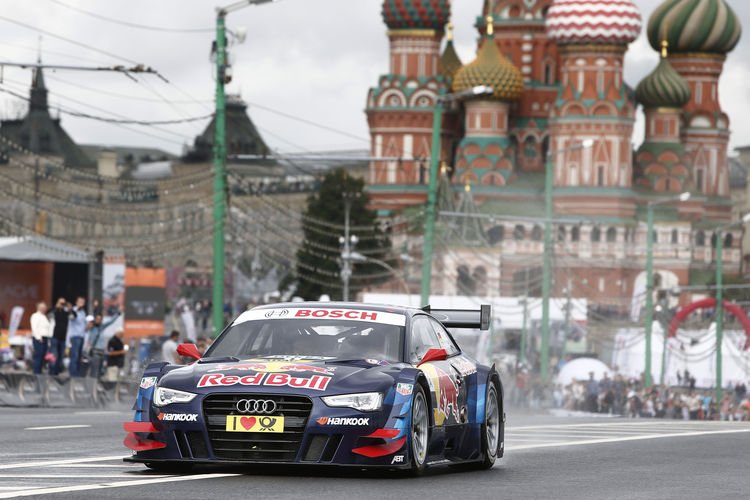 Audi drivers visited Moscow on several occasions in the past few months to promote the DTM visit, which gave them the opportunity to intensively experience the enthusiasm of the fans on location. Now the race is just around the corner: From August 2 to August 4, the Audi RS 5 DTM and leader of the standings Mike Rockenfeller are making their race debut in Russia.

The DTM’s premiere in Russia is a calculation with many unknown quantities. None of the drivers has ever competed in a race at Moscow Raceway and the track layout with a length of only 2.555 kilometers has never been used by any racing series at all. Consequently, there is no experience available with respect to set-up or strategy on the third-shortest circuit featured on the 2013 DTM calendar. How fast the Audi Sport Teams Abt Sportsline, Phoenix and Rosberg and their drivers will be able to adjust to the new challenge will be a key success factor.

An Audi driver – Mike Rockenfeller – is traveling to Russia as the leader of the standings. The German has scored points in each race so far, claimed victory at one round and, at the beginning of the second half of the season, has a two-point advantage over the reigning Champion Bruno Spengler. The DTM has not experienced a season as thrilling and hard to predict as 2013 in a long time, with five different winners in the first five races – a tally like this at the season’s midpoint was last seen six years ago.

Before heading for Moscow, the Audi squad has another date on its agenda. The German Motorsport Federation (DMSB) has scheduled the court session to hear the appeal of Mattias Ekström’s exclusion from the fifth round of the season at the Norisring for July 30. The Swede had initially won the city street race in Nuremberg but was subsequently excluded due to an alleged breach of parc fermé rules. Audi Sport Team Abt Sportsline immediately appealed this decision.

Tickets for all DTM races of the 2013 season are available at www.audi-motorsport.com/dtm. Fans in many countries of the world can watch qualifying and the race live on the DTM’s new YouTube channel at www.youtube.com/dtmint live. A total of 39 TV channels air live DTM coverage in 141 countries.

Dieter Gass (Head of DTM): “The race in Moscow marks the DTM’s start into a new adventure. I think all the teams and drivers are looking forward to the experiences to be gained in Russia. The Moscow Raceway is new territory for everybody. We’re racing on a track layout there that has never been used before. The track is very short and, at first glance, doesn’t offer a lot of opportunities to use DRS, so achieving an optimum result in qualifying will be particularly important.”

Hans-Jürgen Abt (Team Director Audi Sport Team Abt Sportsline): “Moscow is a great challenge for all of us. After the weekend at the Norisring, our team is traveling to Russia with huge motivation and is naturally aiming to up the ante. Nobody knows the track – maybe that’s a small advantage for the seasoned campaigners, three of whom are part of our squad.”

Ernst Moser (Team Director Audi Sport Team Phoenix): “It feels nice to be traveling to Russia with Mike (Rockenfeller) as the leader of the standings. We don’t know what’s awaiting us there, so it’ll be a bit of an adventure. But we’ve packed a certain basic set-up in our bags that we’ll be fine-tuning in practice.”

Arno Zensen (Team Director Audi Sport Team Rosberg): “We don’t know the country, the city or the race track. So it’ll be a new experience and a challenge we’re very much looking forward to.”

Filipe Albuquerque (28/P), Audi Financial Services RS 5 DTM #6 (Audi Sport Team Rosberg)
• Is contesting a GRAND-AM round at Indianapolis before the weekend in Moscow
•    Did the third-fastest pit stop of the race in Nuremberg
“After the race at the Norisring, I’m traveling to Moscow with optimism. In practice and qualifying, we found our speed again and on the new track in Russia want to continue exactly where we left off.”

Mattias Ekström (35/S), Red Bull Audi RS 5 DTM #11 (Audi Sport Team Abt Sportsline)
•    Visited Moscow in February together with Edoardo Mortara
•    Contests the Spa 24 Hours in an Audi R8 LMS ultra on the weekend before Moscow
“On my first visit to Moscow I could tell how enthusiastic the Russian fans are about motorsport and particularly the DTM. The 24-hour race is the perfect way for me to gear up for a weekend that has a lot of unknown factors. I normally cope well with that, so my aim for Moscow is clear: victory.”

Jamie Green (31/GB), Red Bull Audi RS 5 DTM #12 (Audi Sport Team Abt Sportsline)
•    As a big bicycle racing fan, intensively watched the Tour de France
•    After the DTM race in China and vacations in the USA and Turkey, is leaving Western Europe only for the fourth time
“I’ve never been to Russia before and am looking forward to this trip with the DTM family. We’ve had a lot of continuity on our calendar for years, so it’s great getting to know a new track again for a change. Nobody has driven there before, so everybody will be starting with the same chances. I’m going to take a close look at the track on location and then give everything to finish at the far front of the field.”

Miguel Molina (24/E), Audi RS 5 DTM #20 (Audi Sport Team Phoenix)
•    Is receiving the original graphics with the RS 5 logo again on his RS 5 DTM
•    Has his main residence where others spend their vacation: in Lloret de Mar
“I’m very much looking forward to the race in Moscow. It’s a bit like the visit to Shanghai three years ago when nobody knew what to expect either.”

Edoardo Mortara (26/F/I), Playboy Audi RS 5 DTM #5 (Audi Sport Team Rosberg)
•    Together with Mattias Ekström visited Moscow in February
•    Is contesting a GRAND-AM round at Indianapolis before the weekend in Moscow
“The race will be a great challenge for all of us. We’re arriving at Moscow with the same opportunities. I’m wishing for us to be just as competitive there as we last were at the Norisring.”

Mike Rockenfeller (29/D), Schaeffler Audi RS 5 DTM #19 (Audi Sport Team Phoenix)
•    Before the race, promoted the DTM at  Moscow City Racing
•    Extended his lead of the standings at the Norisring to two points
“I’ve had the opportunity to get to know the country and the people a bit before the event. I’m looking forward to the race and excited to see if our RS 5 DTM will feel comfortable on the short track. It’s the first race in a long time at which everybody is starting from scratch – that makes it a thriller.”

Timo Scheider (34/D), AUTO TEST Audi RS 5 DTM #23 (Audi Sport Team Abt)
•    Visited Moscow at the beginning of July for a press conference and autograph session
•    Most recently, celebrated three birthdays – his mother’s, son’s and brother’s – within the space of one week
“Considering the amount of misfortune I’ve had in the first half of the season it can now just be followed by a huge string of fortune, preferably starting right in Moscow if it were up to me. A new track, a new challenge, the same opportunities for all of us – that sounds like an exciting weekend for fans and drivers.”

Adrien Tambay (22/F), Audi ultra RS 5 DTM #24 (Audi Sport Team Abt)
•    Is planning a sightseeing tour of Moscow around the race weekend
•    Is only contesting his second DTM season and is the youngest driver in the Audi team
“A new race track can be beneficial for a young driver because nobody’s got an advantage based on experience. I’d like to use this opportunity and force my luck a bit. It’s high time to start scoring some points.”

* All statistics are provisional and subject to the decision of the appeal by the sport tribunal on the exclusion of Mattias Ekström at the Norisring.

The DTM is running at Moscow Raceway for the first time.