Skip to content
We are using cookies for a better user experience.
04/29/19
Neuburg a. d. Donau
Sport

Audi RS 3 LMS with victories in Germany, America and Japan

Links
{{ activeItem() }}
Twitter
03/05/21
.@abtmotorsport is returning to the @DTM in 2021 with two Audi R8 LMS entries. The driver line-up includes two Audi… https://t.co/NEgKa5fmQB
03/04/21
Wishing good luck to all of the Audi teams racing this week: 🇺🇸 @GT4America at @RaceSonoma 🇺🇸 @gt_america_ at… https://t.co/8Il0DLQdlH
03/02/21
Team Rosberg will run two Audi R8 LMS entries in the 2021 @DTM season. The team’s line-up includes Audi Sport drive… https://t.co/28Jii1M4dW
03/01/21
Wishing a happy birthday to Audi Sport driver @weerts_charles. &gt;&gt; https://t.co/lBfInLStG8… https://t.co/AvDY6qdG5B
Audi Sport on Twitter
{{ activeItem() }}
Facebook
02/27/21
We are saddened to hear the news about the passing of Hannu Mikkola, a longtime friend of Audi Sport and the World Rally champion with Audi in 1983. We send our sincere condolences to his family and friends.
02/26/21
Strong pace for the Audi e-tron FE07 in Diriyah: Fourth place for René Rast and Lucas Di Grassi moved forward seven places to ninth. Both cars in the points and tomorrow we race again. >> audi.com/FormulaE #FutureIsAnAttitude #DiriyahEPrix
02/25/21
Audi Sport ABT Schaeffler in the 2021 ABB Formula E World Championship. First-ever Formula E night races coming up on Friday and Saturday at 20:03 local time (18:03 CET). Broadcast info >> fiaformulae.com/watch #FutureIsAnAttitude #DiriyahEPrix
02/24/21
Three E-Prix so far in Diriyah since 2018 with our highlight in 2019: Lucas Di Grassi on the podium with a runner-up finish. Aiming for more this week in the first two night races in ABB Formula E history, February 26–27. >> audi.com/FormulaE #FutureIsAnAttitude #DiriyahEPrix
Audi Sport on Facebook 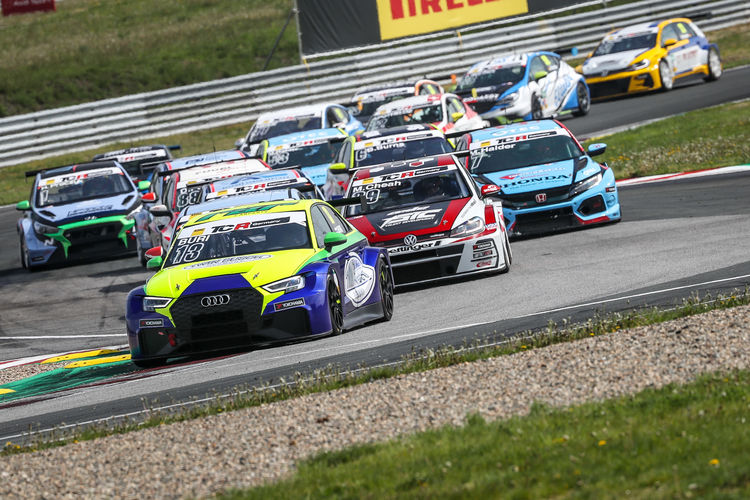 In 2019, the Audi RS 3 LMS, the 2018 TCR Model of the Year, continues its winning streak by customers in international racing series. As well as at the season opener in Germany, the TCR touring car was victorious in a sprint race in America and an endurance race in Asia.

Strong kickoff in Germany: Team LMS Racing started the 2019 ADAC TCR Germany season with a triumph. From third on the grid in race two, Antti Buri clinched victory in an Audi RS 3 LMS. In a gripping duel, he kept immediate rival Mike Halder at bay in Oschersleben and crossed the finish line with an advantage of seven tenths of a second. For Buri, this marked the sixth race win in the ADAC TCR Germany. As a result, the Finn is ranked in third place of the standings after the first of seven race weekends.

First victories in the TC America: On the third race weekend, an Audi Sport customer team celebrated the first two victories this season in the TCR classification of the TC America. On the 5.2-kilometer circuit in Virginia, Michael McCann Jr. in an Audi RS 3 LMS from McCann Racing prevailed against the competition in race one with a clear advantage of 8.8 seconds. In the second race, his teammate, Britt Casey Jr., won with a 4.0-second advantage.

One-two in Japan: The Audi RS 3 LMS remains unbeaten in the Super Taikyu Series. As before in the season opener, the customer teams again scored a one-two in the TCR category in the second race at Sugo. This time victory went to Team BRP Audi Mie with Yuya Oota/Takeshi Matsumoto/Takuro Shinohara. After three hours of racing, Team DreamDrive with Takuya Shirasaka/Shozo Tagahara/Naoto Takeda followed them across the finish line by a gap of only 6.8 seconds.

Excellent debut by Gilles Magnus: Belgian Gilles Magnus, who won the Volant TCR 2019 race driver selection competition of the Belgian automobile club RACB at Audi Sport in Neuburg last winter, thrilled both the fans and his team in his maiden race in the TCR Europe. In an Audi RS 3 LMS of Comtoyou Racing, he had entered the race in sixth place of the 37-strong field in changeable weather at the Hungaroring. In a spectacular race on a wet track with many excursions of his rivals he improved to second place due to his accomplished control of the car. He saw the checkered flag only 1.6 seconds behind the winner. As a result, Gilles Magnus is the leader of the TCR Europe standings after the first of seven events.

Successful return to the Nordschleife: Team Møller Bil in round three of the VLN Endurance Championship for the first time this year competed on the Nürburgring again. As in the past, Atle Gulbrandsen/Kenneth Østvold/Håkon Schjærin were candidates for a podium finish right away. The Norwegian driver trio piloted the Audi RS 3 LMS to second place in the TCR classification after four hours of racing.

Thrilling season opener: The Audi Sport customer teams started the new ADAC GT Masters season at Oschersleben with a total of three podium finishes. Team HCB-Rutronik Racing, which had been promoted from the DMV GTC to the ADAC GT Masters, was instantly the second-best team in the field of 31 entrants. The Swiss Patric Niederhauser and Audi Sport driver Kelvin van der Linde with a 3.6-second gap finished runners-up in race one. Just four seconds behind them Jeffrey Schmidt and Audi Sport driver Christopher Haase from Team BWT Mücke Motorsport saw the checkered flag in third position, having fought back from seventh. In the second race, Ricardo Feller and Audi Sport driver Dries Vanthoor scored position two for Montaplast by Land-Motorsport after having started from fourth on the grid. Feller/Vanthoor are now tied on points with Niederhauser/van der Linde in second place of the standings, separated from the top spot by just two points.

Second place on Nordschleife: Team Giti Tire Motorsport by WS Racing in an Audi R8 LMS GT4 clinched a trophy at the Nürburgring. In round three of the VLN Endurance Championship, Tim Breidbach/Bernd Hoemberg/Thomas Leyherr in poor weather conditions scored second place in the SP8 class among six entrants.