Skip to content
We are using cookies for a better user experience.
06/03/19
Neuburg a. d. Donau
Sport

Links
{{ activeItem() }}
Twitter
09/23/21
MEDIAINFO: 100 days to go until the Dakar Rally: A race against time for Audi Sport &gt;&gt; https://t.co/tNLOfBm45l… https://t.co/xsF4kkNwxL
09/23/21
[1/2] Good luck to the Audi teams: 🇪🇸 @GTWorldChEu Sprint Cup finale at @CircuitValencia 🇩🇪 NLS @vln_de at… https://t.co/vv3SZUrN78
09/21/21
From the USA to Germany, we are welcoming an iconic driver to the Audi family. Get ready for a new type of high per… https://t.co/9jxN8IZset
09/21/21
MEDIAINFO: Welcome! Audi electrifies with U.S. star Ken Block &gt;&gt; https://t.co/8LMhH7KPDe #FutureIsAnAttitude… https://t.co/5G1CPyZm0c
Audi Sport on Twitter
{{ activeItem() }}
Facebook
09/23/21
Under the skin of our new Audi RS Q e-tron. T-100 days until the start of the 2022 Dakar Rally. >> audi.com/Dakar #FutureIsAnAttitude #RoadToDakar #Dakar2022 #RSQe-tron
09/21/21
Racer, drifter, progressive thinker. There is a new face on the block who is ready to redefine high performance. Meet the newest member of our team now >> at.audi/KenBlock #FutureIsAnAttitude #Audi #AudiSport #etron -------------------- This vehicle shown here is the Rally Dakar vehicle that is not available as a production model.
09/20/21
Electrifying and exhilarating. Our partners at FC Bayern München got to experience the Audi RS e-tron GT* with a memorable afternoon at the Audi driving experience center at Neuburg an der Donau. Driving change never looked so fun. Discover more at >> at.audi/fcb-meets-e-tronGT #AudixFCB #FutureIsAnAttitude #etronGT #emobility -------------------- *Power consumption, combined*: 20.2–19.3 kWh/100km (NEDC); 22.5–20.6 kWh/100km (WLTP)CO₂ emissions, combined*: 0 g/km Closed roads/professional drivers,instructors present / do not copy.
09/20/21
Audi Sport Italia is on top of the standings in Italy thanks to another victory with the Audi R8 LMS. Adding to the success was a second overall GT3 triumph in China, a DTM Trophy win with the Audi R8 LMS GT4 and podiums for the Audi RS 3 LMS in four countries – just some of the highlights. Well done to our customers! 🇮🇹 🇨🇳 🇳🇱 🇩🇪 🇳🇴 🇪🇸 🇭🇷 >> audi.com/GT3 >> audi.com/GT4 >> audi.com/TCR #PerformanceIsAnAttitude
Audi Sport on Facebook 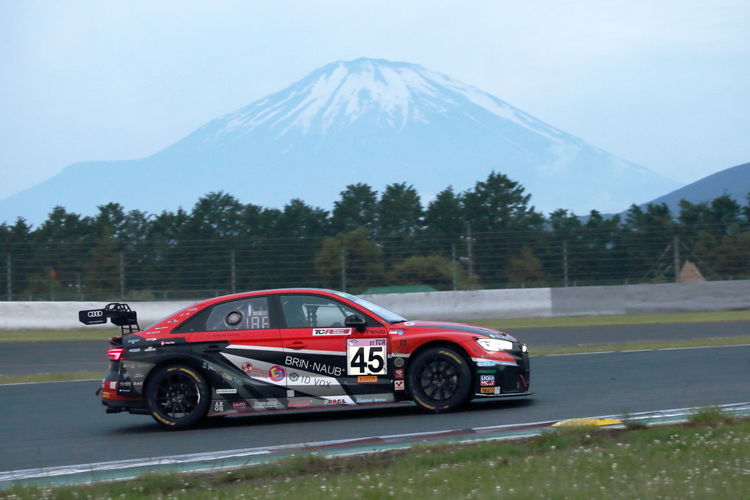 The Audi RS 3 LMS is experiencing its best season in Japan and remains unbeaten in the third consecutive race in the TCR category of the Super Taikyu Series.

Dominant appearance in Japan: The Audi RS 3 LMS is currently the measure of all things in the Japanese Super Taikyu Series. Following victories at the first two events, Audi Sport customer racing’s touring car also scored a class win in the season’s most challenging race. In the Fuji 24 Hours, Team DreamDrive took the lead in the seventh hour of racing. Naoto Takeda, Takuya Shirasaka and Shozo Tagahara won with a three-lap advantage after one day and one night. For the Audi RS 3 LMS, this marked the second consecutive class win within eyeshot of Mount Fuji after Audi Team DreamDrive Noah decided this competition in its favor in the TCR class a year ago.

Third Audi victory in Canada: Jean-François Hevey on the second race weekend of the Canadian Touring Car Championship at Calabogie won the TCR classification in the first race in an Audi RS 3 LMS. It was the third victory this season for Team M1GT and the customer racing touring car from Germany. Travis Hill from TWOth Autosport in third position claimed another podium finish for Audi. In the second race, Matthew Taskinen finished third as the best Audi privateer. Travis Hill is now in the top spot of the standings, level on points with Honda driver Gary Kwok. Jean-François Hevey after two of five events is ranked in third position.

Three podium finishes at Anderstorp: Team Brink Motorsport that fields three Audi RS 3 LMS cars in the TCR Scandinavia again went home with trophies from the second race weekend. In race one, Andreas Wernersson clinched second place in an Audi RS 3 LMS, ahead of Tobias Brink. In the second race, Tobias Brink finished runner-up, claiming his best result so far this season. Now, after two of seven events, both have scored 64 points in their classification, only four points off the top spot. In the teams’ classification, Brink Motorsport has netted the most points for the second time in a row, so having increased its advantage to 17 points.

Perfect weekend for Anthony Liu: In round three of the Audi Sport R8 LMS Cup, Anthony Liu from China won both races at Shanghai from pole position. In the first heat, the privateer from Absolute Racing had briefly lost the lead after the start. He dropped to fourth position, but before the end of lap one fought back to first in spite of 20 kilograms of ballast on board and went on to achieve a clear advantage. Alex Au from Hong Kong took second place while third went to last year’s champion Andrew Haryanto from Indonesia. 30 kilograms of ballast did not prevent Liu from dominating the second race, too. As a result, the Chinese also secured a slot in the “Road to Suzuka” program that provides the best Cup drivers with an opportunity to participate in the Suzuka 10 Hours in 2020. Alex Au again finished the race runner-up. Angelo Negro from Italy, on claiming third position, managed a strong debut weekend in the Audi R8 LMS Cup. In the GT4 category, Sheng Yanwen won both races. Australian Yasser Shahin continues to lead the standings ahead of Alex Au and Tony Bates. Anthony Liu advanced to position four following his successes at Shanghai.

Parker Thompson unbeaten: On the second race weekend of the Canadian Touring Car Championship, there was no getting around Parker Thompson once again. As in the season opener, the Canadian from Ontario scored victory in both races on the circuit at Calabogie in an Audi R8 LMS GT4 fielded for him by Team Speedstar Motorsport. Thompson is now leading the standings with a 50-point advantage.