Skip to content
We are using cookies for a better user experience.
07/05/21
Neuburg a. d. Donau
Sport

Audi returns to the “Big Apple” with Formula E 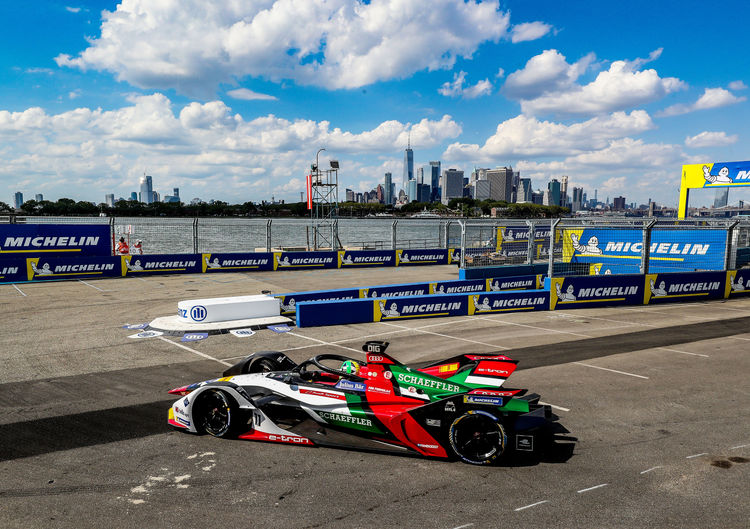 Formula E is back in the “Big Apple”, New York: This weekend (July 10/11), the all-electric racing series will host two races on the street circuit in the heart of Brooklyn. The championship is more fiercely contested than ever before ahead of the tenth and eleventh rounds of the season. Audi Sport ABT Schaeffler is within striking distance in both the drivers’ and teams’ standings.

Audi Sport ABT Schaeffler sets the benchmark in New York in terms of podium finishes (three) and fastest race laps (three) and has already won the race once, with a 1–2 victory. In addition, the German squad has the best memories of the city, where Audi celebrated the teams’ title with a fabulous recovery during the final two races of 2018. These previous results are however only statistics, because Formula E in its seventh season is as unpredictable as never before: in the drivers’ standings, the top six are separated by only 13 points, while in the teams’ standings, the top five driver pairings are separated by just 14 points. René Rast is currently fourth in the drivers’ standings.

“A look at the standings shows how close everything is. After nine races, everyone is pretty much still in the game,” says Team Principal Allan McNish. For him, it’s all the more important to establish the team in the top group and put them in the best possible position for the season’s final phase. “Literally every point counts this season and it’s precisely with this mindset of fighting for every single point that we’re going into the two races in New York.”

Lucas di Grassi and René Rast also want to take the momentum and positive energy from Mexico with them. The Brazilian-German duo recently managed a sensational 1-2 victory in Puebla, after having started from eighth and ninth on the grid. “New York has always been good to us,” says di Grassi, who won in Brooklyn in 2018 and celebrated the teams’ championship on the podium one day later. “The success in Mexico was good for all of us and has given us confidence. Now, we want to clinch the next victory for Audi in New York.”

For di Grassi’s teammate René Rast, the Brooklyn circuit is new territory, which is also the case with many of the tracks in his first full Formula E season. “I’ve never been to New York before, so I’m very curious about the city and all of its flair,” says Rast. “I only know the track from the simulator, but even then, it feels very exciting. Our goal now, of course, is to repeat the success from Mexico.”

For the fourth time, the venue for the two races is located in the Red Hook neighborhood in New York’s Brooklyn borough, which overlooks the skyline of Manhattan. The track runs right along the shore of Upper New York Bay, which separates Manhattan and Brooklyn. The circuit in New York, in the middle of midsummer, is merciless with its length of 2.320 kilometers and its hairpin turns. “We’re expecting hot temperatures, very high humidity and, on top of that, we’ll be starting on a track that doesn’t forgive the slightest mistake,” says Allan McNish.

As with all of the remaining race weekends in London and Berlin, two races will be held in New York. The start times: 16:30 local time (22:30 CEST) on Saturday and 13:30 local time (19:30 CEST) on Sunday. All of the international broadcasters, including broadcast times, can be found online at www.fiaformulae.com.

In addition to the Audi Sport ABT Schaeffler factory team, the Envision Virgin Racing customer team will also be chasing points with the e-tron FE07 that was developed by Audi. This season, Nick Cassidy and Robin Frijns are racing for the British squad which, like Audi Sport ABT Schaeffler, has been a member of the Formula E family since the first race in 2014. Envision Virgin Racing has already won three races in New York. With two podium finishes this season, Frijns is currently ranked in second overall in the drivers’ standings.