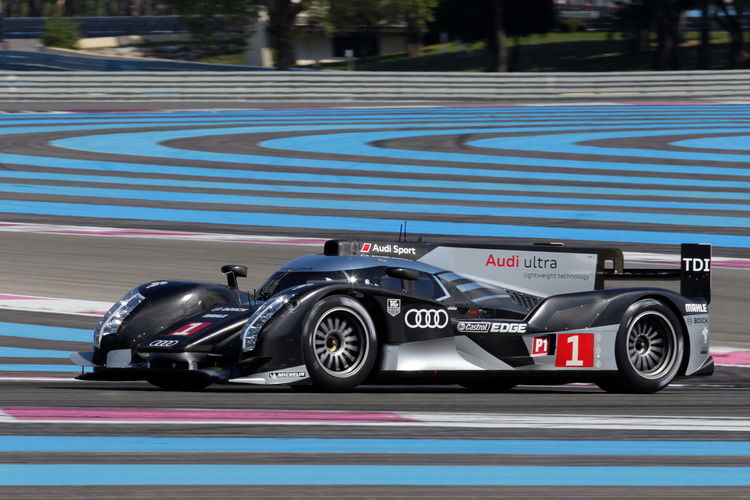 Lightweight design expertise expressed visually: This is the principle under which Audi enters the famous 24 Hours of Le Mans this year. The three Audi R18 TDI cars, which join the grid for the French endurance classic on June 11/12 and which make their first public appearance over the Easter weekend at the Le Mans test day, perfectly embodies – also visually – Audi’s core expertise in lightweight technology.

The livery of the three Audi Sport Team Joest Audi R18 TDI cars is dominated by puristic carbon fiber. The car of last year’s Le Mans winners carrying start number “1” even runs in the characteristic black of the extremely light and, at the same time, high-strength material, which also plays an increasingly important role in the development of new production cars.

The R18 TDI is a particularly authentic ambassador for the company’s lightweight  technology which will be bundled by the term ‘ultra’ in the future. “Lightweight design is a very important factor at Le Mans because a light car is also always a more efficient car,” says Dr. Wolfgang Ullrich. This year, it is of even greater significance since the regulations stipulate smaller engines producing less power – for the Audi R18 TDI this means over 540 hp (397 kW).

Although there is a minimum weight of 900 kilograms for LMP1 cars at Le Mans, the target is to produce a car weighing significantly less than this limit in order to optimize the weight distribution with the help of ballast and to lower the center of gravity as much as possible.

“With the R18 TDI every component was optimized logically with regard to weight,” stresses Martin Mühlmeier, Head of Technology at Audi Sport. “The same applied to the chassis and the bodywork, the gearbox and the engine. We scoured the car for every superfluous gram.”

The carbon monocoque produced in a single-piece, for which a highly complex manufacturing process was developed and which is an impressive proof of the company’s lightweight design expertise, is not only revolutionary for a Le Mans sports car. The same applies for the bodywork which was lightened by 40 kilograms between the first and second version. “Such a consequent lightweight design is a high technical challenge,” says Christopher Reinke, Technical Project Leader at Audi Sport.

The V6 TDI engine in the R18 TDI is about 25 percent lighter than the V10 TDI engine in its predecessor. “On one hand through downsizing, but also to a certain extent because we explored completely new directions and chose an unusual engine concept,” explains Ulrich Baretzky, Head of Engine Development at Audi Sport.

The new six-speed gearbox, which has a high amount of carbon-fiber composite material, and the complete LED headlights also help to save weight. It was also possible to omit the electric cooling of the light-emitting diodes in the headlights commonly found in production cars. Because the gearshift is no longer activated pneumatically but rather electrically, the R18 TDI requires no more pneumatic system. Optimized airflow through the cockpit should make air-conditioning redundant.

“The Audi R18 TDI is equipped with many innovative solutions,” says Head of Audi Motorsport Dr. Wolfgang Ullrich proudly. “It was built for regulations specifically targeting future technologies – and with the background enabling these technologies to be introduced into road going cars in the future. This is what makes sport prototypes so interesting for Audi. That we will now see the first impact of Audi ultra lightweight technology at Le Mans demonstrates just how motorsport and production line development go hand in hand at Audi. I’m convinced that ultra will be mentioned in one breath with terms like quattro or TDI in a few years.”