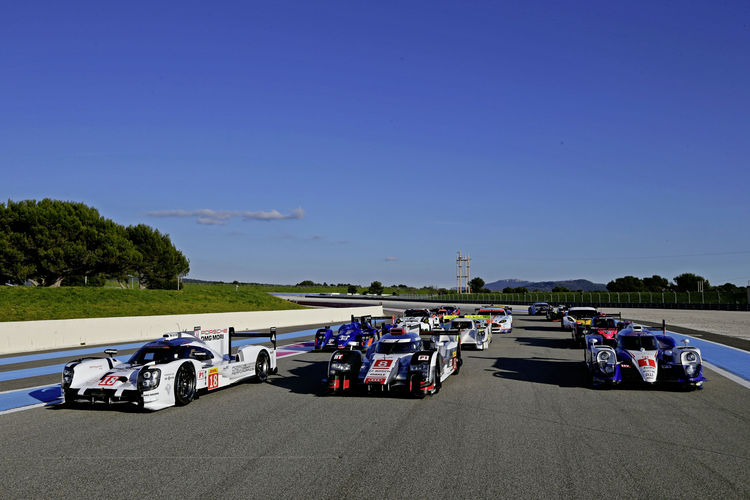 Audi is ready for the 2015 FIA World Endurance Championship (WEC). On Sunday, April 12, at Silverstone in the UK, the chase begins for the World Championship title that Audi won in 2012 and 2013. With two new R18 e-tron quattro cars and six successful drivers, Audi Sport Team Joest will be battling for the first victory in the new season.

A newly designed hybrid sports car, some 10,000 test kilometers, an Audi teambuilding and fitness camp in February and an initial meeting of the teams at the official FIA WEC Prologue on the last weekend in March: “Audi is ready for the 2015 season. It’ll be tougher this year than ever before,” says Head of Audi Motorsport Dr. Wolfgang Ullrich. “At the Prologue at Le Castellet, we met with our opponents for the first time in the 2015 season and were able to see that everyone is thoroughly prepared – even though nobody put their cards on the table there. Our aim is to win again at Silverstone, like we did in 2012 and 2013.”

There, the spectators witnessed the racing premiere of a new generation of the Audi hybrid sports car. The combination of a V6 TDI engine with e-tron quattro hybrid drive is more powerful and more efficient than ever before. The two-fold amount of energy – four megajoules – is available in the electric drive system while the diesel engine delivers an output of more than 410 kW (558 PS). Combined with clearly improved aerodynamics and new developments in the chassis, the Audi R18 e-tron quattro runs faster than before but uses even less fuel.

Plenty of diversity is awaiting the drivers at Silverstone. The circuit on the former airfield used to be famous for its high speeds. Now, numerous narrow sections complement the track configuration, resulting in an unusual combination that forces the engineers to make compromises in setting up the cars. A comparison: The R18 e-tron quattro runs through turn four called ‘The Loop’ in first gear at a little less than 80 km/h whereas it achieves more than 270 km/h in the ‘Maggots’ section in seventh gear. The drivers have to shift up into a higher gear 18 times and downshift again 18 times per lap – which amounts to 36 gear changes around the 5.891-kilometer track.

The 2012 Silverstone winners, Marcel Fässler/André Lotterer/Benoît Tréluyer (CH/D/F), will be entering the race in car number 7 on Sunday at 12.00, local time. They have won the Le Mans 24 Hours three times and were World Endurance Champions in 2012. A year later, Loïc Duval (F) decided this title in his favor together with his then team-mates Tom Kristensen and Allan McNish. He is sharing car number 8 at Audi with Lucas di Grassi (BR) and Oliver Jarvis (GB), who will be competing in his home round at Silverstone. Jarvis lives in Burwell just 130 kilometers away from the race track and is contesting his first full FIA WEC season.

In the season opener, Audi will be racing in an important growth market. With approximately 158,800 deliveries, the company recorded an 11.8 percent increase in sales in the United Kingdom compared with the previous year. In the past ten years, the brand even doubled its deliveries there. Within Europe, the United Kingdom is Audi’s second-largest market following the German domestic market.

In total, Audi’s LMP race cars have clinched five victories at Silverstone, two in the FIA WEC and three in other sports car racing series between 2004 and 2008. In addition to the WEC victory – accounting for 24 points in the Championship – the race this year will be about winning the Tourist Trophy as well. The tradition-steeped British motorsport trophy has been awarded since 1905.