Skip to content
We are using cookies for a better user experience.
09/28/20
Neuburg a. d. Donau
Sport 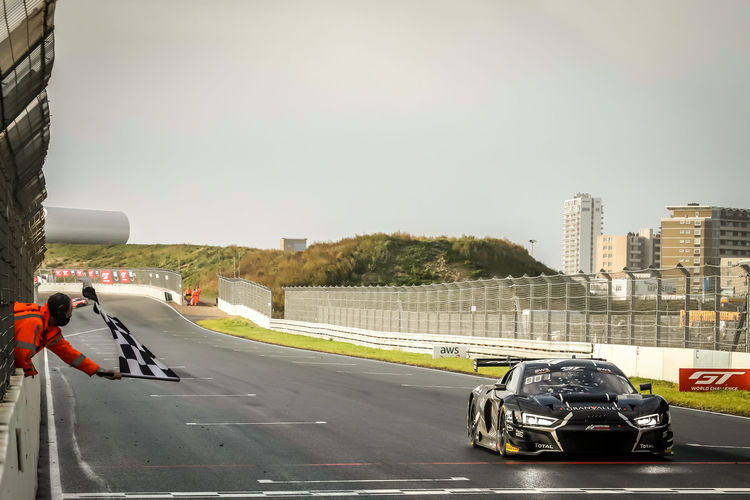 The Belgian Audi Club Team WRT celebrated its second victory of the season in the GT World Challenge Sprint Cup at Zandvoort and remains at the top of the standings. The Audi RS 3 LMS contributed to a successful weekend of Audi Sport customer racing with a total of four wins worldwide.

Victory and podium finishes at Zandvoort: The third of four rounds of the GT World Challenge Europe Sprint Cup was tailor-made for Audi Sport’s customer teams. On the wet track at Zandvoort, Ryuichiro Tomita had decided to drive on rain tires in the Audi R8 LMS of Belgian Audi Club Team WRT before the first race. The Japanese driver, who started from third place, thus overtook his two front runners, who had been on slicks, right after the start. At half time, the Asian handed over his car to Kelvin van der Linde. The South African extended his lead to more than 30 seconds and celebrated his first victory of the season in the sprint race series with his teammate. Audi Sport driver van der Linde has thus taken the lead in the overall standings of the GT World Challenge, which includes both sprint and endurance races. The Belgian Audi Club Team WRT has also extended its lead in the team classification. Audi Sport drivers Dries Vanthoor/Charles Weerts, who also drive an Audi R8 LMS from Belgian Audi Club Team WRT, continue to lead the sprint table. Simon Gachet and Steven Palette completed the success in the first race with third place overall for Saintéloc Racing. The two Frenchmen and their team remain championship leaders in the Silver Cup classification of the sprint racing series before the finale. Saintéloc Racing won another cup on the North Sea coast. On his 33rd birthday, Audi Sport driver Christopher Haase achieved second place overall together with Arthur Rougier in the second race.

Series of successes continued: Uwe Alzen continues to set the pace in Spezial Tourenwagen Trophy. On the fourth race weekend of the clubsport racing series, the racer in the Audi R8 LMS also remained unbeaten at the Sachsenring. In both qualifying sessions, the 53-year-old ex-professional had secured pole position. In the first sprint he gained a 1.6 second lead over Tobias Schulze, in the second race he crossed the finish line 18.3 seconds ahead of the Nissan driver. Thus the private driver and his Spirit Race Team Uwe Alzen Automotive won all eight sprints in the current season.

Class victory in Virginia: On the sixth race weekend of the American Trans-Am racing series, an Audi privateer won in his class. At the Virginia circuit, Ken Thwaits in the Audi R8 LMS ultra won the XGT class.

Class success in the Eifel: The Giti Tire Motorsport by WS Racing team won its class at the Nürburgring 24 hours despite several setbacks. The Audi R8 LMS GT4 of Kari-Pekka Laaksonen/Kristian Jepsen/Jan Sørensen/Roland Waschkau touched a guardrail in the rain during the initial phase. During the race interruption in the night, the team repaired the suspension damage of the production-based GT sports car. An effort that was worth it: On Sunday, the team won the SP 8 class after the retirement of an opponent and thus improved by one position compared to last year.

Two podium places in Mid-Ohio: The Audi customer team CarBahn with Peregrine Racing contested two races at the sixth race event of the IMSA Michelin Pilot Challenge in Mid-Ohio for the first time this season. Last year’s champions Tyler McQuarrie/Jeff Westphal took second place in the Audi R8 LMS GT4 after two hours of racing on Saturday. The next day they were again on the podium in third place.

Trophies in Monza: On the third race weekend of the GT Cup Open Europe series in Monza Baporo Motorsport achieved two podium finishes. Daniel Díaz-Varela/Manel Cerqueda finished second in both 50-minute races in the Audi R8 LMS GT4. They have thus extended their lead in the amateur standings to 15 points and are second overall.

Two victories for Maximilian Paul: At the third round of the Audi Sport Seyffarth R8 LMS Cup Maximilian Paul celebrated his third and fourth consecutive victory at Assen. From fourth place on the grid, the German managed a perfect drive, while the drivers in front made mistakes. Kris Heidorn, who started from pole position, lost the lead to Swiss Lucas Mauron as early as on the first lap before the new leader was turned around by Heidorn shortly afterwards. When Heidorn, who was then again in the lead, made a mistake, Maximilian Paul took the lead and finally won ahead of Lucas Mauron and Kris Heidorn. In the second sprint on the Dutch track, the finish was in exactly the same order. After three of four events, Tim Reiter leads the overall Cup standings with 112 points ahead of Tom Spitzenberger and Maximilian Paul.

Double success in Mid-Ohio: Two customer teams from Audi ended up in front in the sixth and seventh rounds of the IMSA Michelin Pilot Challenge in the TCR class. For the first time this season, the touring and sports car series held two races in one weekend. In the first two-hour race, James Vance/Max Faulkner and their team FASTMD with Speed Syndicate were 8.5 seconds ahead. Third place went to Gavin Ernstone/Jon Morley from Road Shagger Racing in another Audi RS 3 LMS. The second, also two-hour race was won by Ernstone/Morley. Third place went to Michael Johnson/Stephen Simpson of JDC-Miller MotorSports, who also drove an Audi RS 3 LMS.

Audi Team Hitotsuyama in front in TCR Japan: Takuro Shinohara made perfect use of his opportunities in the third round of TCR Japan in Okayama. Starting second in each race, the young driver in the Audi RS 3 LMS won by three seconds on Saturday and almost six seconds on Sunday. He thus extended his lead in the race series’ Saturday’s classification to 24 points. In the Sunday standings, he is runner-up, only two points behind the top of the standings. In the team classification, Audi Team Hitotsuyama is already 22 points ahead of its best rival after three of six events.

Double championship lead in the FIA WTCR: After the second race weekend of the FIA WTCR, Comtoyou Racing leads two classifications with its private drivers. On the Nordschleife of the Nürburgring, Tom Coronel in the Audi RS 3 LMS was the best driver in the Trophy classification as fifth overall in the first race. The Dutchman increased his lead over Alfa driver Jean-Karl Vernay by four points to ten. Gilles Magnus, who drives another Audi RS 3 LMS of the Belgian Audi customer team, won the rookie classification in the first race and now has a 16-point lead in the standings for young drivers.

Podium and lead of the standings: Team Comtoyou Racing is still ahead in two classifications after the third round of TCR Europe. In the first race at Monza, Nicolas Baert in an Audi RS 3 LMS improved from eighth on the grid to third place. The Belgian is thus the new runner-up in the overall standings at the halfway point of the season. He also leads the Yokohama Trophy ahead of his Moroccan teammate Sami Taoufik. Jean-Michel Baert’s team is ten points ahead in the team classification.

Podium in the Eifel: Team Bonk Motorsport returned home from the 24-hour race at the Nürburgring with another trophy. In third place in the TCR classification, the team from Münster with its drivers Hermann Bock/Andreas Möntmann/Max Partl/Alexander Prinz took a podium place for the fifth time with the Audi RS 3 LMS.

Third place at Sachsenring: At the fourth event of the Spezial Tourenwagen Trophy, an Audi privateer achieved a podium result. Max Frederik Gruhn started at the Sachsenring in an Audi RS 3 LMS. In the second sprint, the young driver achieved third place in his class after eleven laps of the race.